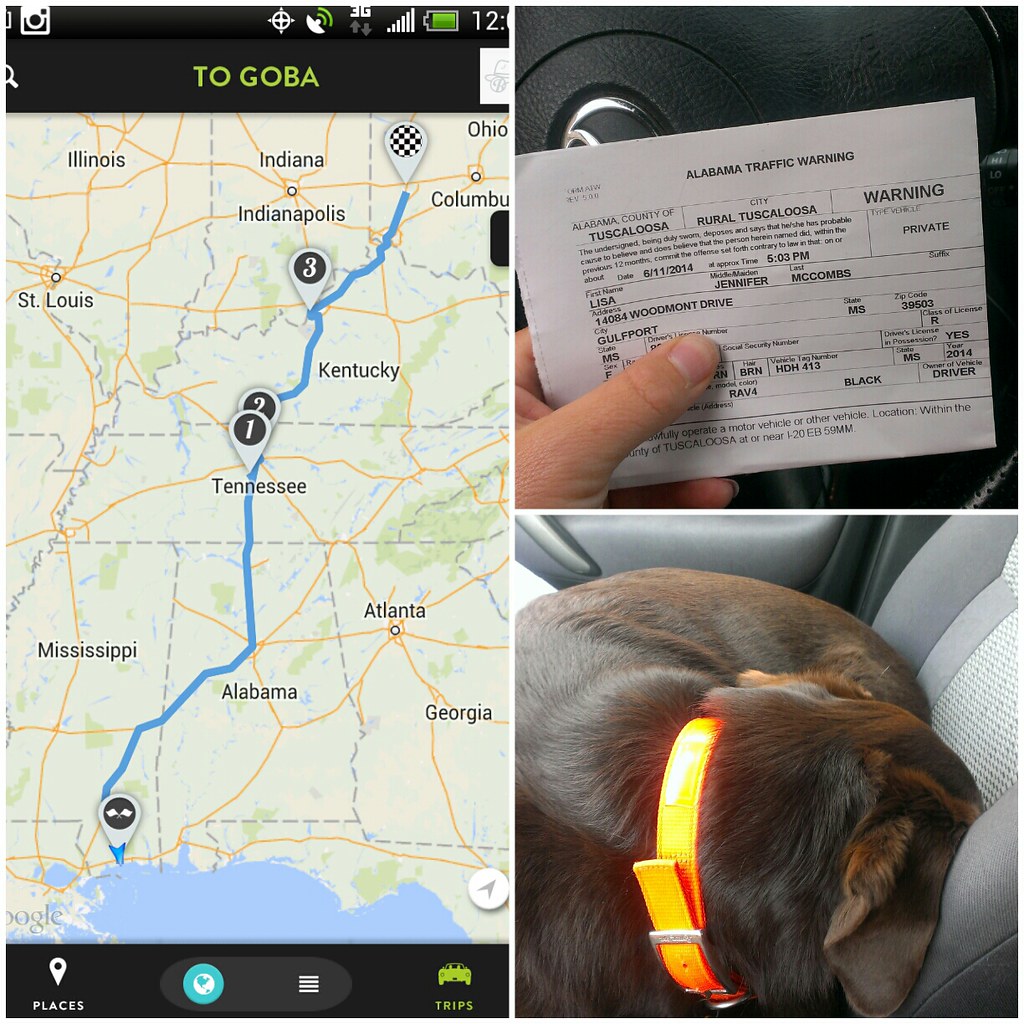 Yay, I finally got to hit the road today. So with Chris having a crazy fun time in CO, I piled Jake in the car and I'm headed to Ohio for the Great Ohio Bicycle Adventure and time with my mom. And while I am excited to get there, I'm taking my time and enjoying the scenery. Of course, "taking my time" is relative...

With a speed limit of 70mph I had my cruise control set on 75. That's pretty common, right? 5mph over? I think we can all confess to driving about 5mph over the speed limit...

But when you see a cop all flashy lights everyone slows wayyyy down. That drives me nuts. For one, they already have someone pulled over and two, just do the speed limit (which in my mind is about 5mph OVER the speed limit...)!!

Getting away from the pack, apparently I was headed up a hill at 81mph. HOWEVER, I had slowed back down to 75 and reset my cruise control. It didn't matter though, he clocked me at 81...
2 miles later the flashy lights were on ME. I honestly didn't realize I was speeding back there, but there's a good chance I was, I hate being around all those semi's so I probably wanted to escape them and get back into my happy pace (place?).

So he pulls me over and asks for my drivers license. No problem. Conversation shortened for your quick reading pleasure, I argued (kinda play argued) with the Trooper for a few minutes that I wasn't speeding, my cruise control was set to 75mph.

I could tell he had a sense of humor so I tried to bargain with him...can you at least put down 75 instead of 81 to save me some money? He said the ticket would be $300 no matter what. $300!? He was a K-9 Trooper. I had Jake with me... Time to pull out the puppy eyes...
Me: "You're a dog guy, look at that face, can't you cut us some slack!?"
Trooper (all Mr. Serious but you can tell Mr. Nice Guy, sucker for dogs): "What's your name boy?"
Me: "His name is Jake."
Trooper: "You doing okay today Jake?"
Jake attempts to lick him through the window. Thanks bub #girlsbestfriend

Okay so Mr. Trooper was super nice, a sucker for dogs, and not even mad at me. I'm a fan of police. I'm not big on breaking the law so I wasn't mad at him either. I wasn't being a crazy person or legit argumentative; I was very polite, honest, and kinda joking about the whole situation. He must have seen the genuinity in my eyes cause he said, "I'm going to give you a written warning." Seriously!? THANK YOU!!

Apparently, what that means is if I'm pulled over again in AL, no questions asked, I will be ticketed. And I'll be an asshole. So I promised him that I would set the cruise control to 70. The speed limit. At least until TN. So the next 3 hours, through Alabama, my cruise control was set to 70mph. I'm a woman of my word! And I was scared of a $300 ticket... I went ahead and maintained that speed through TN too. I mean, why do I need to go 5mph over anyway? I have no desire to rush my life away. No more speeding.

And now I sleep. Lots of adventure to set out on tomorrow...