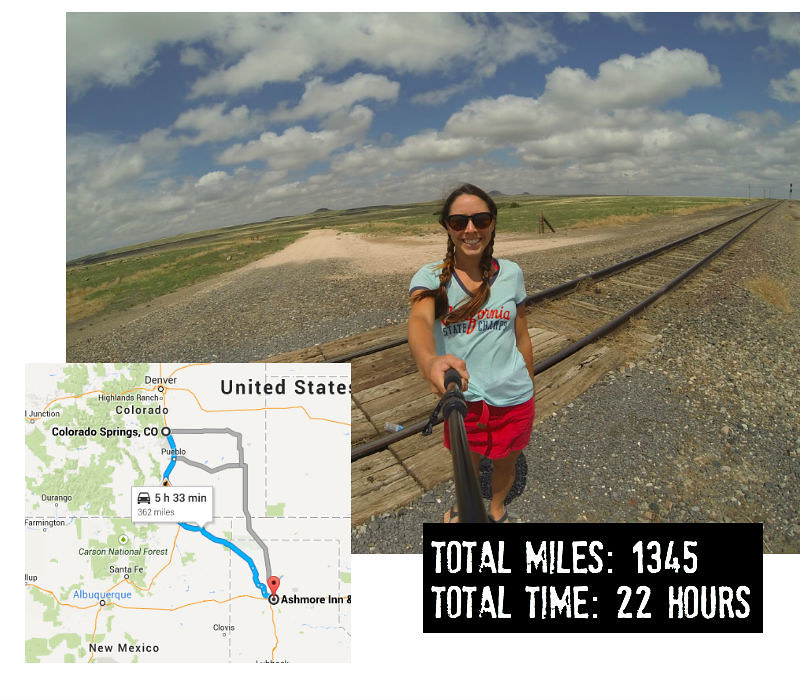 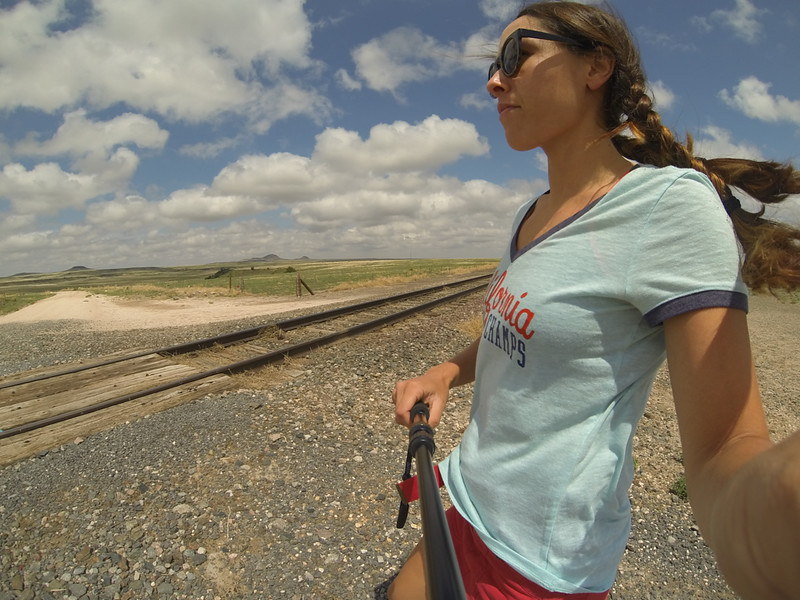 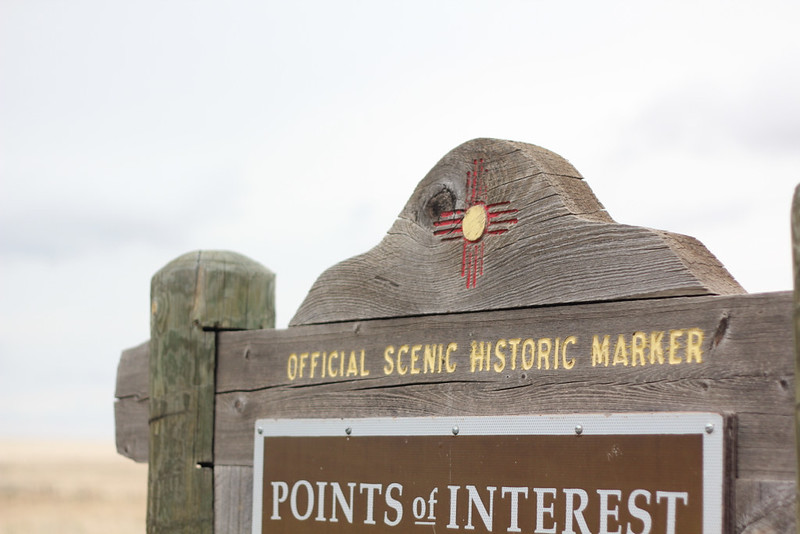 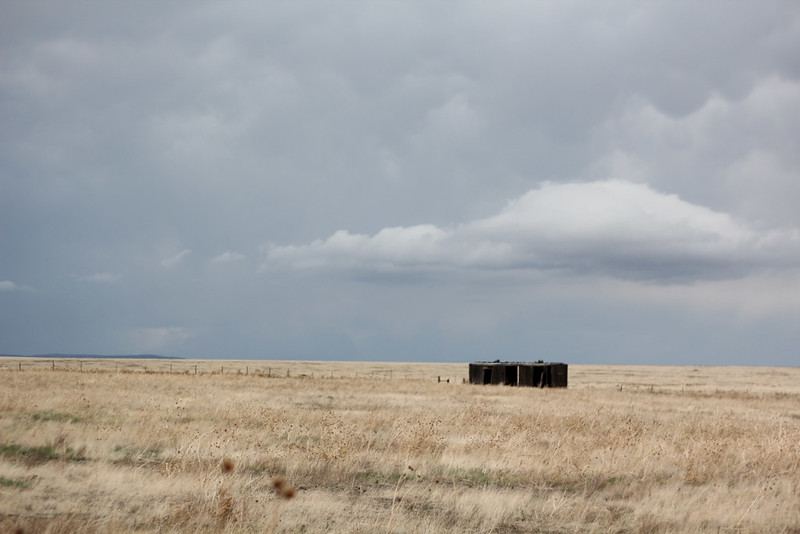 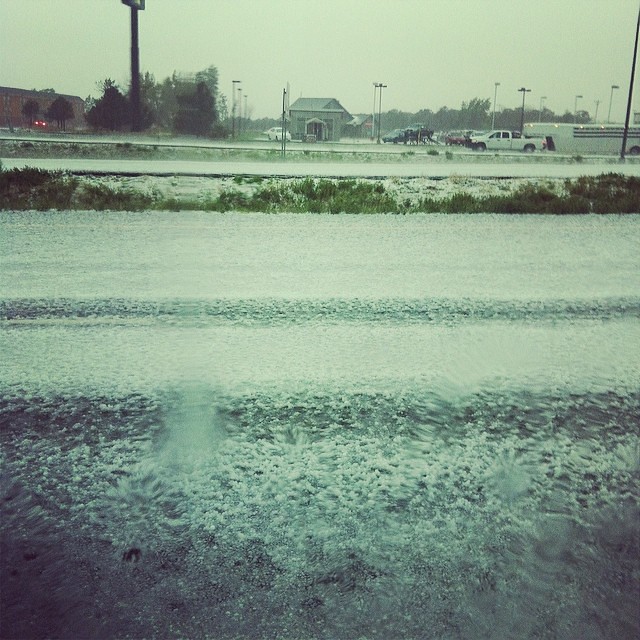 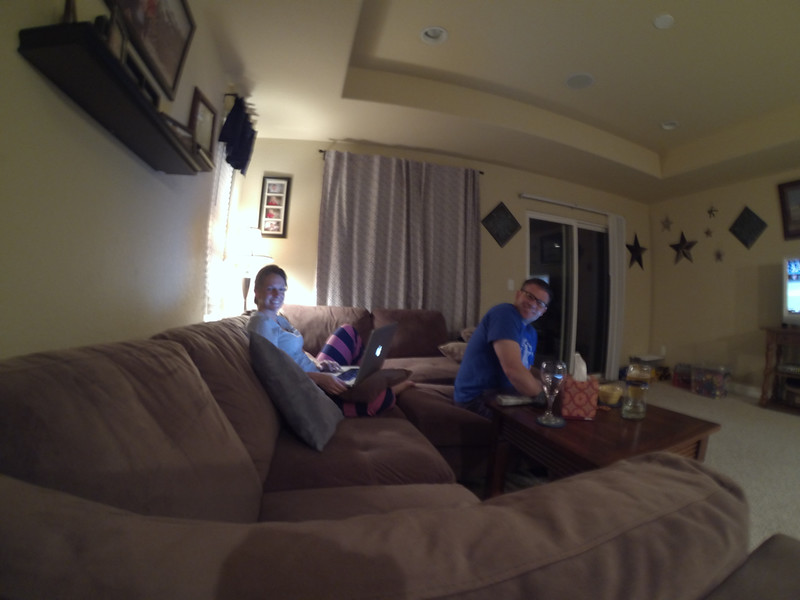 Todays days of travel started with me not knowing where the hell I was going. You know the times that you just put all your faith in your GPS, and then wake up from the daydreaming and ACTUALLY start paying attention, in which you then realize you have no clue where you are, and your GPS has been "re-routing" for God knows how long.

Yeah, it was that day. It wasn't till I drove right into a battle of 2 different doggie street gangs did I realize that I had drove up into the ghetto! What the hell was up with these dogs? There were BIG dogs, LITTLE dogs, dogs with collars, and stray dogs. It didn't seem real. It was like doggy school let out and they were literally running the streets. The dogs flanked me for a block…. I locked my doors, like dogs could totally just break in and steal my car, a chihuahua with a spiked collar looked like he could cut me. I was scared.

That was in Dalhart, TX. I know not when I passed into New Mexico. A Wendy's sign informed me I was in New Mexico. Which left me nervous for about 10 minutes as I tried to think about what I was thinking about that made me totally miss me crossing over into another state. Those signs are huge. Geez.

Once I was in New Mexico things became beautiful. Texas was just ugly, but I should have just noticed by the scenery that I had crossed over. There were hills/mountains in the distance, tumbleweeds crossing the highway, beautiful yellow grass and then you could see for miles. The wind was blowing so hard that you could see the clouds moving at high speed and made me think I was watching a movie in fast forward. It was absolutely gorgeous. Now that I type, thats probably the reason why I didn't notice a state sign, I was too busy staring AT the state.

It was a happy drive. Never did I feel like I couldn't wait to get out of the card. Then next think you know I am in Colorado. While in New Mexico, I had been watching a lighting storm dancing on top of a mountain in the distance, what I didn't know that, that there mountain was my turn into Colorful Colorado.

So much for color, unless BLACK is a color. Is it a color? (I was sure at some time there was a debate on white & black being actual colors). It was pitch dark, the only light came from the lightning that was coming down on both sides of me. Then the rain got REALLY heavy and HARD and "OMG, is that hail?". I continued driving into it. People were slowing down, pulling over, but I continued on. Then I went under an over pass, where cars were hiding for cover. I thought "Egh, I am tough, I will push through it", just after that thought passed it was coming down so hard with hail that I couldn't see. So I pulled in behind a truck.

It got bad, I shared photos and video via Instagram & Facebook. I thought it would let up, but it got worse, in the matter of 5 minutes it looked like I drove into a snow storm. I know I had checked the tempature behind I crossed state lines, and it had been 67 degrees, it had now dropped to 42 degrees. I was sitting in the car in a miniskirt and flip flops. What is happening?

All traffic stopped. No one was driving by. I thought my window was going to break at any moment. I just stared in disbelief. Mark messaged me asking:
1. If I was ok.
2. What size was the hail?
3. Where is my exact location? I will look at radar.

Um, SHUTUP! How the hell is that gonna help me?

It had to be 15 minutes later, cars were starting to drive by. The hail was still coming down, but not as hard. I then tried to pull out, my car wouldn't move. I stopped, took a deep breath, and tried again. This time I fish tailed into traffic, then spun back onto the shoulder. At that moment I wanted to cry. Tears didn't form, but that FEELING hit me. I put my hands on my head and tried not to freak out. Now a state trooper will have to come get me, and I am sitting here in a mini skirt and flip flops, looking like an idiot. What the hell? WHY?

Over time, with traffic rolling by, it kicked up enough water to disrupt the ice I was lodged in, and with a little more fish tailing I was out on the road. Only moving about 30 mph, I was THRILLED to be free. But I was freezing. I felt odd in my clothing. I safely made it to the Colorado welcome center where I ran in and changed into the thinnest pair of jeans I own and a flimsy sweatshirt, only to run back to the car and get soaked. I did not pack for the cold. This might screw me over later this week.

I eventually broke free of the crazy storm. I saw tons of messages from Colorado friends of the crazy weather hitting them, and only hoped that I would miss any more of this lunacy.

Goal was to high tail it into Colorado Springs. Only 2 hours remaining of my trip, but I started to not feel well. I realized that I hadn't had anything to eat for a long while, so made the routine gas station stop. Here is where I met my next colorful character. I also realized that most of my stories so far mention "different" people I met in gas stations, but it's the only human interaction I have while on the road.

Once I pulled into the gas station I saw him. I stepped out of the car and right away heard "HELLO!!! How are you!?" in a spanish accent (it was a mexican accent, you know when people pretend to make fun of a spanish accent? Well he sounded just like that).  I turned and saw this man, the best way to describe him is to combine Yosemite Sam, Poncho Villa, and Saddan Hussian. It may be a bad combination of people, but that is the best way to describe how he looked, but had a constant smile on his face, and you could see he was genuinely a happy person.

I went into the gas station, to only find a line for the ladies room, and stocked up on almonds/jerky/chicharonnes. Then behind me I hear, "Are those your bikes in da car?", he scared the crap out of me, I turned around and said yes, then went moved up further in line. "Ah! Very nice bikes!  Do you bike long distance?", me "yes, actually. I am headed up to Boulder for a triathlon camp", "Very nice, about how far do you ride?", "Um, 50 + miles on the norm", "Oh my God!", (at this moment he reminded me of my dad and how shocked he always is when I describe distances I ride my bike), "I have a mountain bike! (**another mountain biker**),  I just finished a 25 mile ride, but I keep getting….ah…." at this point his moved his hands in the air to describe his pedals "the gears are too hard, I get stuck!". He laughed it all off. "So, your bike?…. About $1000? "(**people always want to know the price!!**), I replied with "A couple more then that". "ohhhh! Because of the handle bars? I see they are different", this then made me realize that he had to have come over to my car and peek into the windows. Nosey little critter!

I explained the reason behind the aero bars. "Ah!! I am so happy for you! I LOVE to ride my bike! It is so beautiful here! I ride my bike everywhere!", this guy was TRULY happy and THRILLED about owning a bicycle. I agreed with him, and we talked about the freedoms one has on owning two wheels. I walked away saying my good byes and hearing "OH!!! I am JUST so HAPPY! For you! Becareful! Have fun!"

I safely made it into Colorado Springs. Crashing at the home of a dear friend I made while living in Monterey. She saw my call for a couch on Facebook, and graciously offered me her home. It was great to see her, hubby and the kids. No one has changed (other than height on the boys) in the 4 years since I had seen her last. We stayed up late watching cable TV and laughing over life. Friends make all the difference in the world, I felt right at home and so happy to be with them. They were even slammed with hugs :)
Thank you, Lindsay & Josh for having me in your home. Seriously SO happy to have stopped and caught you before ANOTHER military move:)

Two lessons learned:
1. Don't where a miniskirt in Colorado.
2. The most interesting people you will ever meet, will be on the roads of the American highways