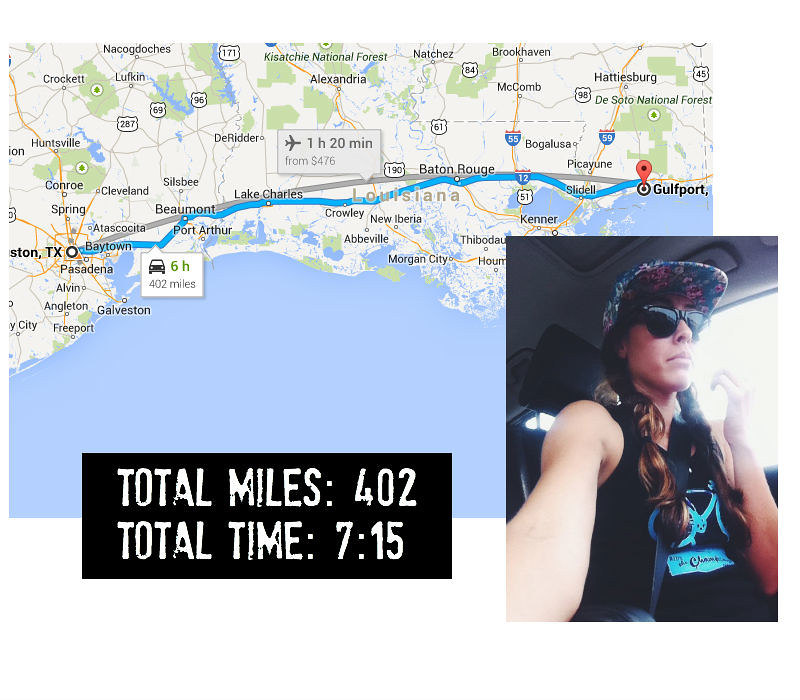 Traffic. TRAFFIC. Why? WHY?
I'm not even to Baton Rouge yet and come to a stand still. I totally turned into one of those drivers that opens the door, stands half way out, give everyone a questioning look, then throw my hands up in the air which indicates me saying "This is bullshit!". You know exactly what I am talking about.

Doesn't help that I started my journey up to Boulder to run & bike, by not being able to find my Oakleys which I run & bike in. THEN!… (there's more), husband misplaced my keys to the locks on my SUP rack which leads me to going on trip without my board. Lets just say I didn't leave Gulfport too happy, which leads me jumping out of my car with disbelief on my face.

**Annnnndd a cat just creeped into my room and nearly made me vomit on myself. Forgot in-laws have 2 scary white cats**

The trip wasn't bad though, even though a half of it I was in traffic.

The first bout of traffic had me getting off in Holden, LA. Where I follow the herd of people desperately trying to find another way to bypass the stand still on I-12. The road we take kinda takes me back in time.  It's a small (I would say) farming town just north of 1-12 called Livingston. It reminded me more of Ohio then Louisiana.

Though the herd tried to avoid traffic, I ended up getting stuck on a 2 lane road in this small town. My goal at that point was to not start pounding my head on the steering wheel (I do have 2 kids in the car. One head down staring into an iPad, and the other, head back, mouth open, drool coming out, unconscious). So I started looking… Judging homes "oh, I like that porch", "Pretty flags", and "that's literally a pile of trash with a door on it". Yes, I am talking to myself.

There were signs saying "tomatoes" and "white squash" (white?). There were American flags everywhere, it makes me happy to see patriotic people. There was also crap everywhere, meaning people used their front yards as storage, which makes me put myself into the American Pickers TV show. I imagined myself NOT driving, I would be with my buddy Julie, she would say (of course all this while stuck in traffic) "LOOK! I think I see a sewing table!", I then would dash out, inquire, then run back to car with a story of a sewing machine bought during WWII. Magical imagination huh? I was in traffic FOREVER!

The highlight of my drive would have to be at my halfway stop in Scott, LA. The home of the Cajun Harley Davidson. I love this stop because it's an easy pull into the gas station, well lit, clean and pretty friendly.

By the time I got there it must have been quittin' time. I drug the kids in with me to pay for gas, and bribe them with ice cream. I walk into a line that wraps half way around the shop. All with guys with cut off t-shirts, covered in dirt, tore up pants, and a six pack in one hand. EVERY SINGLE ONE. Then once I move up in line towards the front, in walks the rap singer Jarule. Du-rag, gold teeth, big ass sun glasses and (of course just like the others) cut off tee & tore up pants.

Ok, it wasn't REALLY Jarule, but it WAS him if he were 5'1. This man was small. He is now behind me in line, I know he is looking at me, then he asks "You in dat car with dem bikes?" (southern cajun accent SOOOO there), I say "yep", he then gets distracted and looks down at Chloe and says "Can I have your ice-cream?!", she doesn't say a word, and the only movement she makes is to hug her ice-cream tighter. I laugh, he laughed then says "How much dem bikes run?". Now this is where it gets kinda weird. Like what do I say? "Well I have about $12,000 strapped to the back of my car right now", all that comes out is "Uhhh",  he then swoops in and says "I bet they're faaaaaaaaaaaaassssssstttt!", he says that while leaning back, one hand holding up pants and the other holding tight to his 6-pack.

Another "yep" out of my mouth. Then again, he swoops in with "I've got a mountain bike". Now I am the only one that when someone sees your bike, or knows you ride, they then bring up that they have some form of a bicycle in their garage? Which leaves you saying "????"

WHAT? How do you compare your bike to a beach cruiser? This situation happens all the time….

"Sweet" <-- at least I am using words now…. Then this 5'1 JaRule, with a 6-pack in his hand tells me all about how big he is into off road riding, and that he helps a buddy maintain a local trail they ride on. My reply "No shit?".

"Now they aint no mountains, but they get the job done".