In South Africa I wanted to do something humanitarian. I got with an organization that protects rhino's from poaching. Unfortunately, upon my arrival, the situation was too dangerous for me to help. The poachers were actually killing activists and volunteers for "getting in their way". Ironically, on the Ironman run route, I met Sian. He and his wife are rhino activists and have set up an organization to help by raising funds for different beneficiaries. I'm so impressed by their efforts.

"I believe that we as trail runners have an obligation to step up and fight whenever our precious natural resources are being threatened, for without them, we would not be able to do what we all love doing – running free!
The rhino, being one of the Big 5, is an icon for this country, and we simply cannot let them die out – especially not for something as selfish as the greed of man!" ~Sian

While he's talking to me about these Rhino trail runs that he organizes I'm all, I AM SO DOING ONE back home! It was FATE! We promised we'd keep in touch and get this organized.
Now the day has come and we are ready to run for the rhino's.

Please check out The Rhino Run
The video will leave you in tears and ANGRY! Ready to do what you can to help.
That's where my trail run comes in. I've organized a 5k, 15k, and 20k trail run on the Tuxachanie on Sept 27/28th at MIDNIGHT.
Registration Form

Why midnight? We are going to run WITH our friends in South Africa. Their runs (they have 6  locations in South Africa) begin at 7 a.m. which is midnight here.
"With the addition of a new South African location this year in East London, as well as our first international Rhino Run happening in Mississippi, The Rhino Run is on track to becoming the largest single day trail running event on the planet!"

I hope you'll be able to join us for this exciting opportunity to help a WORLD WIDE CRISIS.
Currently organizing a virtual run to coincide. Thanks again for your support! 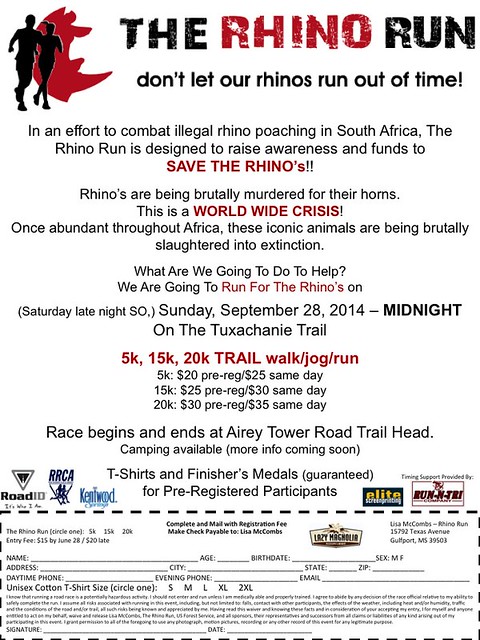