I had an amazing day with friends and I need/want/would love to share it with you... (the best part of this post might be the video at the end - don't feel bad for skipping ahead).

Met up with Luke, Dave, Jack, Jon, Sam, Brian, Wesley, and Bethany <---two new friends, yay!! for an early morning bike ride. I originally had 4 hours but was willing to settle for 3 knowing we'd hit some serious mileage and a short run after. Serious mileage and serious heat. Today was the hottest day so far this year. I watched an ice cube melt in 3 seconds flat. You think I'm kidding...
We hammered out the first half with a 19.5 mph average, refilled, watched more ice melt, laughed (because BIG FAT THICK hotdogs are funny), and headed home for the second half. We slowed down a bit with the heat but still managed an 18.5 overall and 56.3 miles. Jumped off the bike for a 10 minute brick run. Holy crap I nearly threw up and passed out. We are legit crazy. We are! 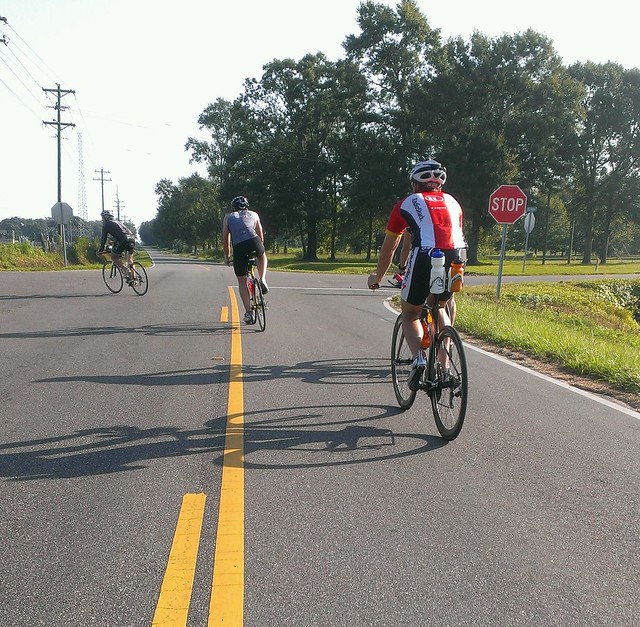 A normal person would shower eat and nap after such an adventure...not this girl. I cleaned up and headed to the Ohr-O'Keefe Museum. Two words: NOT IMPRESSED. There's no art!! Okay, there's a little bit of art - pottery and one room of flower paintings. Oh and there was a small "room" of photography but seriously, I've seen better pictures in my Flickr account!! What exactly are you paying for at this museum!? I will admit, the stairs leading to the observation deck are cool. They are kinda spiral...photo shoot worthy for senior pics or something... but when you get to the top... ummm...oak trees? There's no view! No unobstructed view anyway. Lame.

To make up for that ^^^ we went to the Beau for an ACTUAL view and gelato. Scoops seriously has the best gelato (potentially the ONLY gelato ??) on the coast. Today's flavor - Heath and a Root Beer Float for Dave <---yes they still make those things! Holy 1955! Sitting on the front steps of Beau is actually very peaceful. Even though it was 817 degrees outside, the shade and a slight breeze were cooling. Plus we had ice cream. Mmm, ice cream. (now I want ice cream for breakfast as I'm writing this...).

Finished the day with pizza and a movie. How cliche... Ha! Normal is boring. But let's talk about the movie Transcendence. CREEPY!! I'm more of a 'things that can actually happen' kinda movie girl but  hey, Morgan Freeman AND Johnny Depp!? I'm in!
I guess SciFi isn't my thing... Where do people come up with this stuff!? One critic claimed, "When it's all over, you will turn on your iPhone and ask Siri to find you a good restaurant for a bite to eat near the theater. And you will have learned nothing." It's true. I was just...ready for bed. Another critic said, ""Transcendence" is a moronic stew of competing impulses - bad science meets bad sociology meets bad theology ..." That's true too. Again, I was left with nothing... bedtime!