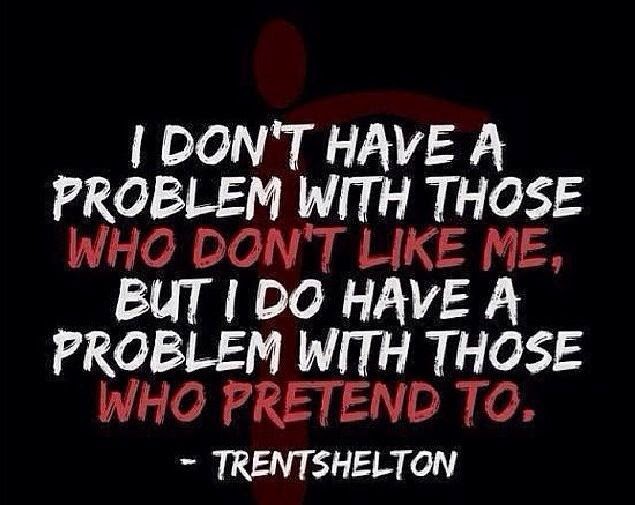 I wrote this a couple of weeks ago. Not for any particular reason (other than it was on my mind) and not because anything happened. But it DOES happen and is happening...so maybe it will help at least one...

I think friendship and social media is a real world problem. I hear and see friends complain about "fake people" on Facebook all the time. Most of the time, I don't allow my energy to go there... but it's real stuff. There are people in each of our lives that don't like us. I guess my curiosity becomes, then why? Why are you pretending to like me? Are you jealous? Nosey? Am I some sort of sick entertainment for you? I don't get it. If I don't really like someone, I don't want them to be a part of my life (and/or Facebook). The people who are in my life are in it because I like them, respect them, they're family, I love them, or some other form of admiration or respect. Why waste any of your energy being "fake" or pretending?

I know I talk about friendship a lot. It's important to me. Maybe because I don't have kids (and don't plan to) and live far from my family, I place a lot of value and need into my friendships. To some, friendship is trivial. To others, it's everything. Without my friends, I am lonely <--- keeping it real. And I have a lot of friends, both online and offline. What stinks is, I can't always tell who's helping me paddle and who's drilling holes in my boat. I don't think I'm alone in this. If I were, there wouldn't be so many quotes out there about haters, deceivers, frienemies, and I wouldn't read about it on Facebook. I think this is pretty common and if nothing else, I want just one of you to know, you're not alone. I feel it too.

It's easy, with social media, to feel a friendship and closeness with someone that doesn't actually exist. When we "Like" and "Comment" on one another's posts we feel a sense of connection.
Do you notice when someone doesn't "Like" and "Comment" though? Or do you notice when they "Like" and "Comment" on all your mutual friends posts but not on yours? Is there a significant meaning to how we interact with "friends" on Facebook?
Liking and commenting is kind of our new form of communication. So if your friends aren't "talking" to ya, does it mean they don't really like you? I know that I can go weeks or even months without actually talking to a friend, but I still love that person and cherish our friendship. It's kind of confusing isn't it?

I think social media has simply created a whole new meaning and understanding of friendship. Do you think our value of friendship has decreased with increased technology though? Do you think people "friend" one another for all the wrong reasons? How many of our "friends" are actually our friends? Does an honest friendship still even exist? I know, lots of questions...

I do believe we "friend" one another because we're in the same social circle or have mutual friends. But what about when we realize we don't really care for or connect with the person? We are so afraid of the Facebook "unfriending". ESPECIALLY if we're in the same social circle. Next event: AWKWARD.
I actually just read, "People who are unfriended may face similar psychological effects … because unfriending may be viewed as a form of social exclusion," Sibona said. "The study makes clear that unfriending is meaningful and has important psychological consequences for those to whom it occurs."

Even though we don't like someone, we may not want to hurt them. I think not liking someone is okay and completely natural, but that doesn't mean you want to hurt them. So, what then? Don't unfriend? Just pretend like we're friends but then talk about each other behind our backs <--- hello 8th grade!! That just doesn't seem okay to me.
There are friendships that expire and fakeships where the connection isn't necessary anymore. And there are times when you think someone is or could be your friend, and it just doesn't work out. I think sometimes it's okay to click the unfriend button and go do your life. Chances are, that "friend" probably won't even notice.

I don't think we notice much when someone doesn't like us (in general). But we do notice when someone we think likes us hurts us because they don't really like us. No more pretending. If you don't like me, set me free.
Courage. Confidence. Determination.
If You Never Tri, You'll Never Know!