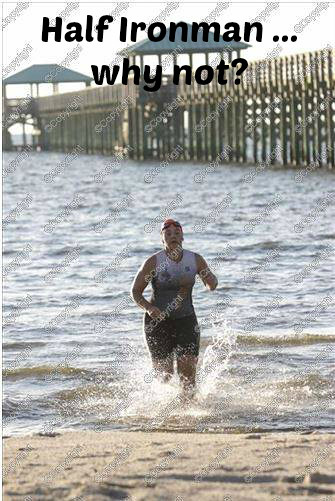 I am a Physical Scientist (Oceanographer) for the US Army Corps of Engineers. With a collegiate swimming (thanks in large part to Title IV) and rugby background, I did my first Sprint triathlon in 2007 while living in St. Petersburg, FL.

Several sprints and an olympic tri later, I found myself on the Gulf Coast in 2009 as a result of a job change. While on the Coast, I enjoyed (loved!) Cross Fit through 2012 when injuries, old lady aches and pains, and a complex TDY schedule started becoming problematic. So I decided to become a professional wine drinker. After one very long TDY in 2013, I begged Lisa McCombs to let me into a half-marathon training program two weeks late. I swore up and down I had been running, but of course had not and lied because I was THAT desperate to get moving again and surround myself with like-minded individuals.

This program was fantastic and for the first time since moving to the Coast, I had friends! Real friends! Lady friends! Sweaty lady friends! I was also running again and enjoying the growth, explosion perhaps, of fitness-minded individuals on the Gulf Coast.

In 2013 I decided to Tri again (why not?), alongside my husband, Ed. After a few sprints and an olympic to 'get back into it', Ed and I came to the decision that life is too short for "shoulda, coulda, woulda" and that it's now or never ... Half Ironman ... why not?
Courage. Confidence. Determination.
If You Never Tri, You'll Never Know!