Speak Your Mind But Don't Be a Bully 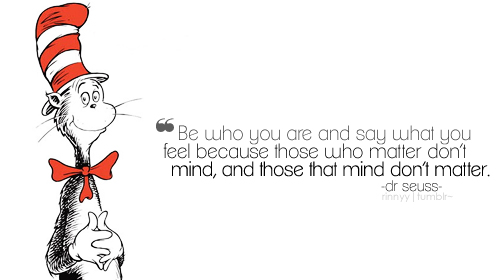 Did you read the title? Read it again. Here, I'll put it down here for you:

Speak your mind but don't be a bully.

If you've known me or talked to me for longer than 30 seconds, you will find that if I have something to say, I pretty much say it. Sometimes it doesn't come out right. Sometimes it comes out EXACTLY right. Some people might giggle. Some might take offense. Some are just confused. My filter doesn't always work. Or maybe I don't have one? Or maybe it just doesn't catch everything. Heck, I don't know... But I appreciate when folks are honest with me, so I think I'm just being honest ~speaking my mind.

I don't think my mind speaks ugly though. I think my mind speaks pretty honest and most of the time with good intent. Here's where a problem or a "problem" exists. Most people that speak their minds are assholes. Or maybe they aren't, but some people think they are?
I think there is a difference between speaking your mind and being a bully (interchangeable with asshole).
If what's about to come out of your mouth is nasty...and purposely nasty, you're probably a bully. If you're trying to be rude or say something that will hurt someone, yeah, bully (asshole).

But sometimes your mind might not have something nice to say, so don't say it at all ?? ~golden rule?? It gets kind of confusing, doesn't it? So speak your mind as long as it's nice? That doesn't seem honest... "speak your mind" is quite contradictory to the "golden rule" isn't it?
Well, why is your mind thinking so ugly anyway!? If you have all these nasty thoughts, time to reevaluate your thinking!
I regress...

What is it about speaking your mind that people are so intimidated by anyway? I think we are afraid to speak our minds 1, because we don't want to seem like an asshole or come off rude. 2, we are afraid we'll be judged. Pssst, you're being judged anyway! And here's why I don't think you're being rude (unless you really are) or an asshole (unless you really are)... you  have freedom of speech, say whatever you want! No one owns you or controls you. (arms crossed foot down ??). I think you can speak your mind (even if it isn't nice) without being a bully (or rude. Or an asshole). Will you hurt feelings? Probably sometimes. Will you offend someone? Probably eventually. But at least what comes out of your mouth matches what's in your head and heart. That makes you REAL.

Okay, so where the heck am I going with all of this? I don't even know... I know that when someone is a complete ASSHOLE to me and then claim that they were just speaking their mind I want to punch them in their throat and force them to sit through a lesson on how to express themselves without being a jackass. But that might make ME the jackass, huh ??? ;)

Anyway, own your thoughts. Express yourself. Don't be intimidated by the opinions of others.
And I'll wrap this up by saying it again, speak your mind, but don't be a bully (or an asshole).