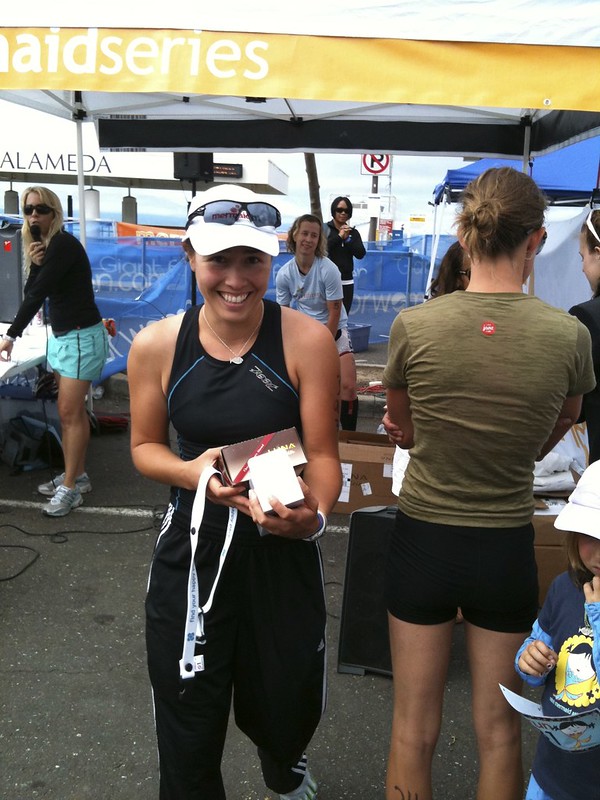 (Thats me, placing in my first ever triathlon in 2010)

“Are you training for a triathlon?”

“No, I am not sure what that is.”
“Well I see that you bike here to swim sessions, and I’m guessing you run. So I figured you were a triathlete. In triathlon they race starting with a swim, followed by a bike ride, finished with a run.”
“Oh, no, that's too intense for me.”

What I was mentally thinking “Lady, you must be out yo mind".

That conversation happened when I was 19. I lived in Ocala, FL. I had come up from college after blowing out my knee. I could barely walk around the block without knee pain, so I needed something to do and joined a highschool swim session, where I embarrassed the crap out of myself daily. All I could do was doggie paddle across the pool, then cling to the side of the pool and cry of exhaustion & embarressment in my goggles while trying to catch my breath.

To get to these swim sessions (and because the schools PT said biking would strengthen my knee) I bought myself a mountain bike from Walmart. This is where I developed a love for biking, there in the long roads in Ocala I started picking up mileage on my little mountain bike.

On Saturday mornings I would see herds of cyclists and triathletes battle the heat and zoom by all the horsefarms that dotted the roads. The triathletes were my favorite, they were so cool in their aero bars. At the time I didnt know they were triathletes, to me it was just cool handlebars.

So I pretended to be like them, I would get down real low on my handle bars, try to tuck in and bust out as fast as my legs would take me. But I could never keep up with the roadies/triathletes on their fast bikes, and ended up riding alone. Alone but content, every ride trying to beat the previous time it took me, or just beast it up the “hill” of Florida.

This is where triathlon entered my life. Fast forward 2 years later. I’m living in Jacksonville, FL. Fell in love with a strapping Naval officer and became engaged. By this time my bike was left behind in Ocala. I biked only in my apartments gym center, and instead of swimming, just lounged poolside working on my tan.

Then a blue Felt triathlon bike came into my life. Now it wasn't mine, but my Fiances. He purchased it as his last big gift to himself as a bachelor. I was impressed. Impressed because when I saw him on the bike, down in aero position, he was one of the bikers I wished of racing down back in Ocala. I learned that they weren’t just “roadies”, they were triathletes.

So I tagged along to Mark's triathlons, and watched. Judged myself against the other woman. I saw big girls, little girls, bikes with tassels, big clunky mountain bikes and of course the svelt flashy TRI bikes. This is where the seed was planted. If they could do it, I could do it.