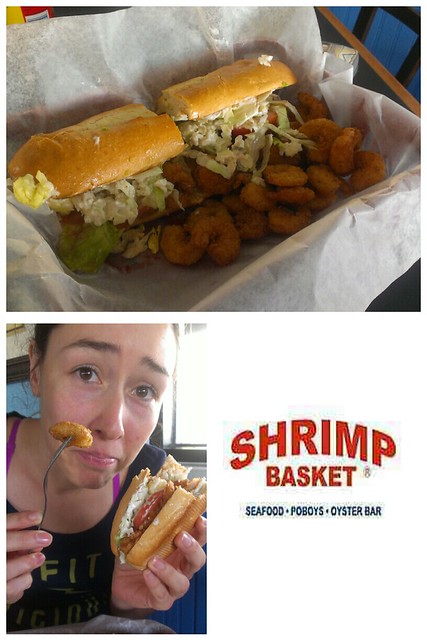 We aren't sure exactly how we ended up here being that our initial comment upon sitting down was, "I'd never stop here." So why did we stop here!? Part of our Sunday's adventure was discovering that Bayou La Batre is a ghost town on Sunday's. We wanted seafood. Po'boys.

We Googled the area with no success. In fact, most of 'from Bayou La Batre to Ocean Springs' is closed on Sunday. Racking our brains, Chris said, "What about that Shrimp Basket place?" So there you have it. We stopped and were SUPER disappointed to learn they were OUT of po'boy bread. DANGggg, they must be that good!? They were slamming busy so we accepted it knowing we would return for the po'boy. We nibbled on some fried shrimp and broccoli bathed in butter. Wouldn't have made for a great review...

So, after a 100 mile bicycle ride today we went after the po'boy. Road hanger (hungry road rage) took over getting us down Highway 49 in record time. Have you ever turned right at a light, made a U'y, and made another right to avoid waiting on a long ass light? Chris has. Ha ha!

Greeted immediately and told to sit where ever we like. Creatures of habit?, we sat at the same table with the same waitress. "What's the best shrimp po'boy on the menu?"

Slaw Po'boy, Shrimp, Overstuffed. Maybe we were starving or maybe they were just FREAKING DELICIOUS, but we ate the heck out of those po'boys! So what happens is, a giant hoagie roll is stuffed with fried shrimp, signature shrimp slaw, tomato, lettuce, and pickles; put it in a basket and dump more fried shrimp on the side. Oh hell yeah! The extra shrimp on the side (overstuffed) was perfect. How many times have you gotten a half empty po'boy? So disappointing. You won't get that at the Shrimp Basket. Their signature shrimp slaw is something quite unique. It's coleslaw with mini shrimps. But sometimes coleslaw is yucky. I mean, lettuce and mayo? Gross! But the Shrimp Basket's cole slaw has great flavor and I just love the tiny shrimps in it. Why is miniature stuff so stinking cute?

Not the cheapest place to get po'boys, but you will get plenty of food for the money. This is a GREAT place to bring out of towners. Instead of spending a lot of money at a "fancy" restaurant for not so authentic food, we recommend checking out Shrimp Basket for some LEGIT southern cuisine. Bring your own water though!!; cause theirs tasted like they dipped a cup of ice in the back of a toilet. Or just get a Coke. You're already eating fried shrimp...

Overall, the service was good. The atmosphere was coastal. The food was deeeeLISH. We will be back to try your other selections of fancy po'boys!! Rockafella (topped with creamy spinach and artichoke), Boom Boom (tossed in their Boom Boom sauce; I'm so intrigued), and/or Buffalo (tossed in their buffalo sauce) Po'boy.
Courage. Confidence. Determination.
If You Never Tri, You'll Never Know!