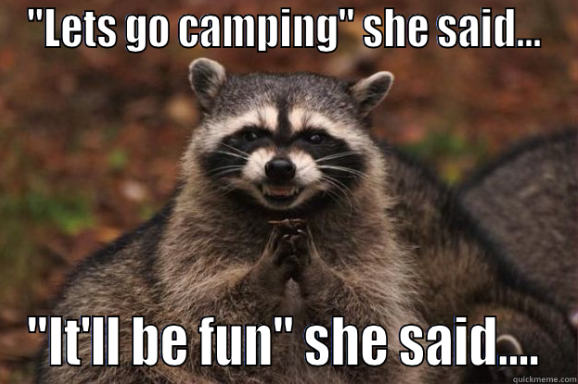 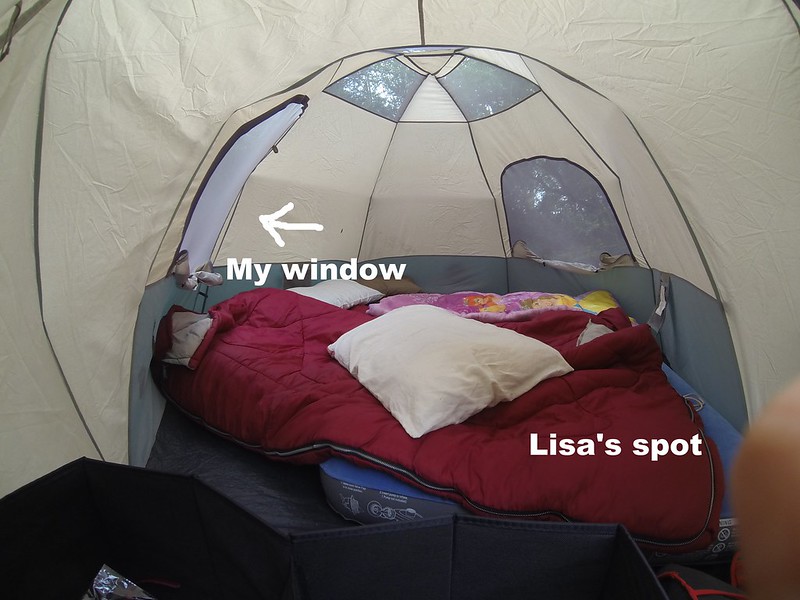 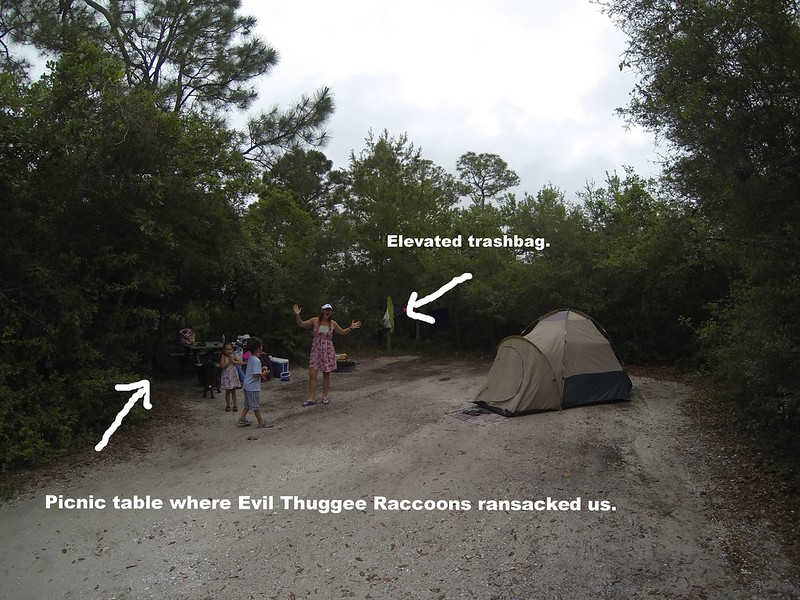 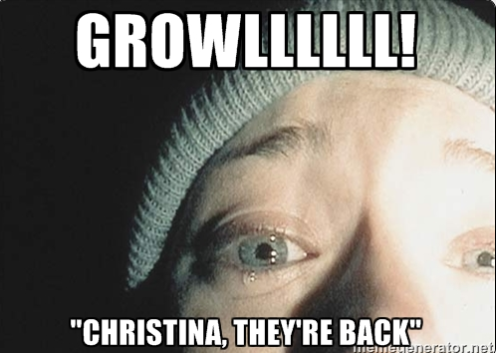 **crinkle…tap tap…crinkle…crinkle**
"OH MY GOD, it's raining!" this is what I say to myself as I sat up in the tent at our second campsite.
I turned to my left and peered out my mesh window… I could HEAR the rain, but the tent didn't seem wet and there wasn't any water coming through the top.
But I can hear it raining all over our campsite…

"TAP! TAP TAP!!"
"oh, shit." I hovered down low in the tent, the "rain" had stopped and something was banging on our picnic table…

"crinkle…crinkle…crinkle.."
Dear Lord let that be rain. I tried staring hard through the mesh, you know that staring so hard your eyes are popping out because you think you're all of a sudden going to be able to see in the DARK? Yep, that was me.

I couldn't see a damn thing. It had to be rain.

Then there was a shadow.
OH MY GOD, we have a haunted campsite.

By this time I am terrified. I keep going back and forth telling myself it's rain just intermittenly going on and off…

I turn to Lisa. She will save me. She will either tell me it's rain… or… maybe she has a gun, oh dear, but if I scare her and she whips out a gun she could end up accidentally shooting someone…

Someone? OH MY GOD, someone could be out there.

I am still staring at the pitch dark out of my mesh window, too scared to move, and I desperately want to close it up… but. it might hear me.

Lisa sat straight up: "What the hell IS that!?"
Me: "I think there is something out there, what kind of animals are here?"
Lisa: "The trash bag is down."

Our eyes slowly adjusting to the dark, our ears picking up every sound we thought we heard, our senses were in terror filled overload.

I had hoped it was around 3:30 am, and we could have just stayed up till the sun came up, because I was FREAKING out.

Please note that by now we are SCREAM whispering at each other.

Now Lisa is half in, half out of the tent just crouched there like a lion. What the hell is she doing? Why won't she take the damn light?

Now half asleep, half panicked, mostly laughing, we realize we've been under attack.

They are no longer at our site, but we can hear them crinkling our water bottles in the distance (go squeeze a water bottle to make the crinkle sound, it's similar to rain...).

We discover the raccoons have torn down and rummaged our elevated trash bag. They've ransacked our picnic table and even got into our tote cooler pulling out all the ice packs and lunchables. Not kidding. We can't make this stuff up people! They obviously ran off with a few water bottles too.

Pretty amused, we cleaned up our site, put the trash in the car, the ice packs back in the tote cooler and zipped it back up tight. Back to bed…

[Lisa]
GRROOOOWWWLLLL!
I am startled from my sleep by the growling and tumbling of two NOT small somethings outside of the tent.

OH MY GOD! They're fighting and they're going to kill us all. Have you ever heard a raccoon growl? GROWL!? Neither had I! But that had to be what it was, right?

Feeling like we're in a beach camping Blair Witch type situation, I scream whisper....
"Christttttiiiinnnnnaaaaaa... THEY'RE BACK!!"

All was silent except the pounding of my heart and the hysterical/terrified laughter between us. Why is this happening to us!? Nearly peeing our pants, we muster up the courage to exit the safe haven of our nylon tent. We assess the damage only to find out those little thugs got into the tote cooler again, UNZIPPING IT, and took out all the ice packs (AGAIN!), and even drank a damn Capri Sun! They drank a Capri Sun!

Back in the tent, post fight or flight adrenaline rush, we recap what the hell just happened. We are laughing so hard we're crying; the kids and Jake snoring their little hearts out. We just got raided by raccoons. TWICE! And the second time was like a slap in the face... like just to pull the ice packs back OUT of the cooler. Like they were running this shit!

[Christina]
I would like you all to know that once we figured out they were raccoons, I automatically thought of them as little Thuggees. Wearing turbans, and some Aladdin style pants… I ended up having a nightmare that I didn't have a big indian knife to battle them, but Lisa had, and there was a snake, and the raccoons were throwing water bottles at us from their magic carpet…

I learned a couple of things from the Thuggee Raccoons
1. Hide your TRASH and your FOOD.
2. Do not under estimate the skilled hands of a raccoon.
3. Your eyes will NOT evolve into night vision goggles.
4. Raccoons drink Capri Suns. No joke.
5. Raccoons do NOT like the gel from melted ice packs.

Also please note that Lisa was acting all gangsta tough during the first Thuggee Raccoon attack, but when the second attack woke HER up... Let's just say even the toughest of us will nearly pee our pants when awoken by a growl... Also, she nearly cut circulation off to my leg she grabbed me so hard to wake my arse up! Not so funny when it happens to you!