So far the weather is great. Low humidity. It's chilly in the shade and comfortable in the sun. The forecast is calling for rain on race day. That's a bit nerve racking because we think it'll be cold. I have the proper gear with me but still... 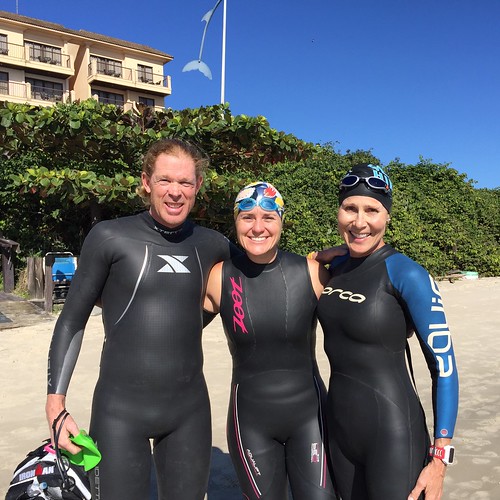 The ocean is gorgeous. It's pretty calm. The water is cold; slightly clear (not Caribbean clear but clean). Deep. VERY DEEP. Maybe high 60's. Overall, chilly in the a.m., comfortable in the afternoon, and chilly again at night. The sun has been hit or miss and a few showers here and there. It's a very pretty area; I have such a great view from my hotel window. Today I sat on the beach for a little while, relaxing, enjoying the waves crashing and it was just perfect. 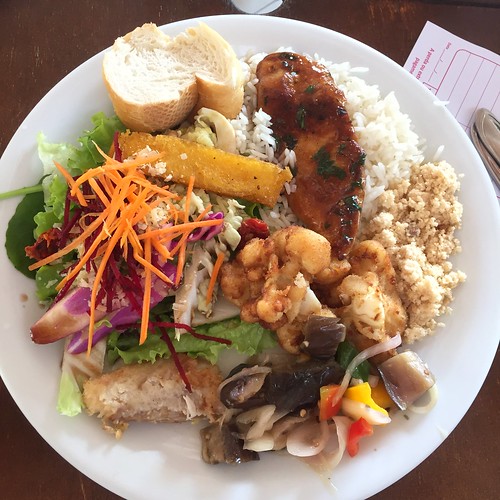 The food is okay. I've only eaten one "thing" that has been like what is that and I want more... otherwise, it's kind of the same as at home: rice, chicken or beef or fish, lots of veggies, big salad leaves and great toppings like chick peas and boiled eggs, beets, carrots, eggplant and peppers. The fresh meat right off the slab is the best and supposedly we're going to a really kick ass restaurant for our celebratory dinner on Monday. 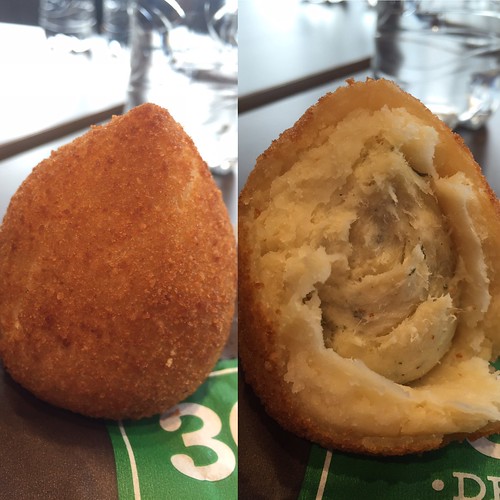 The "thing" was a Coxinhas aka Golden Ball of Delicious. The inside is a shredded chicken, cream cheese, garlic, and maybe parsley mixture. Then there's a dough around it. They boil broth with mashed potatoes and butter and then add flour to it while it's boiling to make a dough. The "dough" is wrapped around the mixture, formed into a teardrop, and then deep fried. Holy shit they're so good. 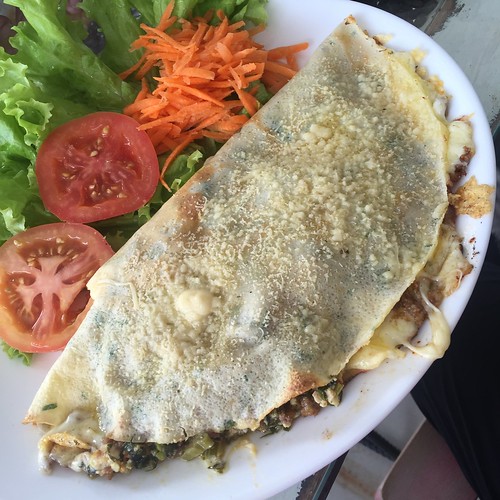 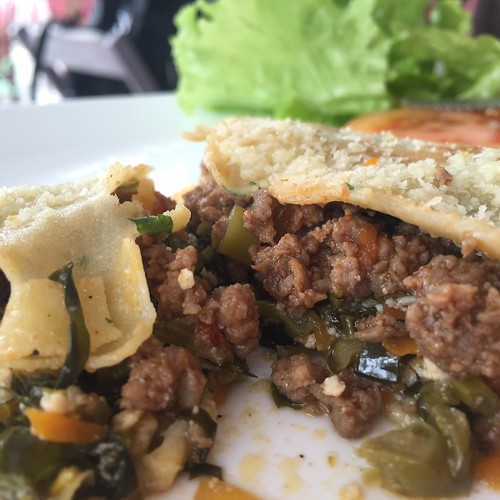 Also ate at a local joint Friday called Carlitos. Had empanadas (one with chicken and cream cheese and one with a beef. Both so delicious) and Brazilian crepes (quite different than you're thinking, see photo).

Restaurants are mostly kind of buffet like or family style. It's easier (and cheaper) to buy and cook in bulk so that's my guess as to why they do it. Many of the places you pick your food and it's weighed to determine price ~ kind of like our little fro yo shops. And it's much of the same at each place. Thursday there was fried cauliflower at our joint, hadn't seen that yet. But mostly not a lot of fried foods except maybe french fries (cause they're easy??). The beer is kind of awful (so I've ordered Stella) as is the wine (unless you can find Argentina wine, that's good!). Their drink is the Caipirinha.  It's made with sugar cane hard liquor and lime. I intend on trying that on Monday.

The people are friendly but very VERY few speak English. Pretty much anywhere I've ever traveled there has been enough English known to communicate or me pick up enough of their words to communicate. It's VERY difficult here. Even pointing doesn't seem to work. And Portuguese is tough! It took me an entire day of repeating "obrigado" ~ thank you ~ over and over and over to remember it. And I still say it wrong. It sounds like avocado (with a b and an r that rolls and if you're female you make "uh" sound at the end and if you're male is you make "oh" sound at the end ~ this language is TOUGH!). I still don't know what hello is. And sorry sounds like "the scoop of" ~ desculpa. I use that a lot. Luckily, I have befriended John. He's from Portugal. SCORE! It's like having a private interpreter! 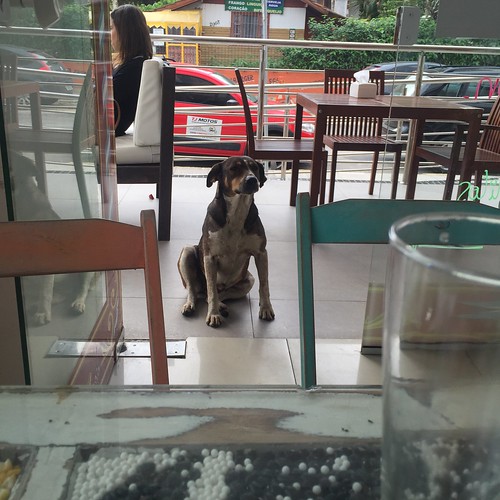 Dogs roam the street. And they each seem to have their own territory. They have collars. They're mostly clean and well fed. There are no leash laws or leashes. And they're not even necessary. And there's no poo on the sidewalks. They bark at and chase the cars and motorcycles that zoom by but could care less of the people. They aren't friendly nor unfriendly, they're just there. And I don't know if that's country wide or just this area ?? And they don't dare walk in the open restaurants. They literally sit at the door waiting for a hand out or an invitation inside. Although, I gave one a handful of french fries today (on the street, not from the restaurant). He sniffed them and walked away. Well. Okay then! 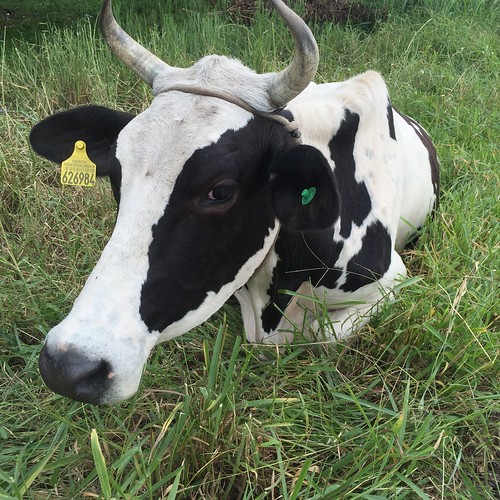 Cows also roam the street. Kind of. They are literally RIGHT next to the road. And pettable. No kidding, he kinda bent his head towards us to let us scratch it. He was just laying there all lazy eating grass, getting his head rubbed. I'm not kidding. And he was super clean. Way cleaner than our cows! Someone obviously takes very good care of him. Wait a minute... HER!

But there's no rhyme or reason to the layout of houses to hotels to apartments to cows... no zoning laws or regulations ~ very random. It's like: shitty house, nice house, hotel, market, shitty house, cow pasture, medical place, hotel, nice house... etc. T
here are nicer areas and what seem like not so nice areas, but mostly just very random. With cows and roaming dogs. And it will seem very tourist/beach like and/but then very local and city'ish. 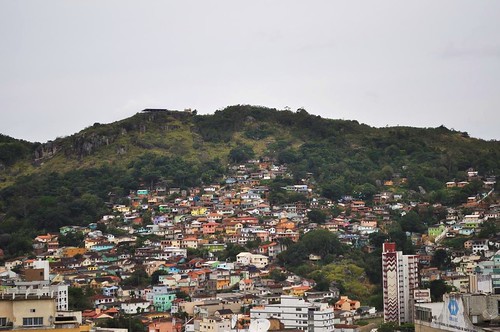 Closer to central Florianopolis, the houses seem to be piled on top of one another on the side of mountains. Here, near the beaches, they are side by side, a bit more "grid" like even amongst the zoning randomness. 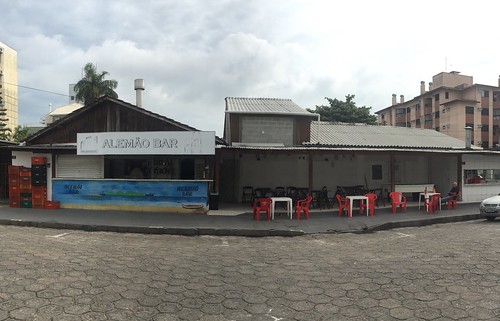 One of my favorite spots (to walk by, I haven't stopped, but I should), is an outside "bar". It looks like an adult version of a lemonade stand. There's a bunch of guys in white t-shirts smoking cigarettes and drinking beer. There's a pool table out there and a few other tables with the plastic lawn chairs. It's super sketchy but looks fun as shit. It's an ideal spot to probably get raped and murdered but I think it's an okay safe place or it wouldn't be where it's at still operating, right!?
Otherwise the bars are quite scarce. Plenty of little restaurants and shops, but not many bars.

I have really enjoyed my first few days here and very thankful to make some friends to enjoy the time with. I wish there were a cultural tour I could take, and maybe there is; I'll check that out on Monday. I'm also very much looking forward to exploring the Amazon next week. But now... it is Ironman focus time... I'm done wandering and tasting and drinking. Game face on ~ let's do this!