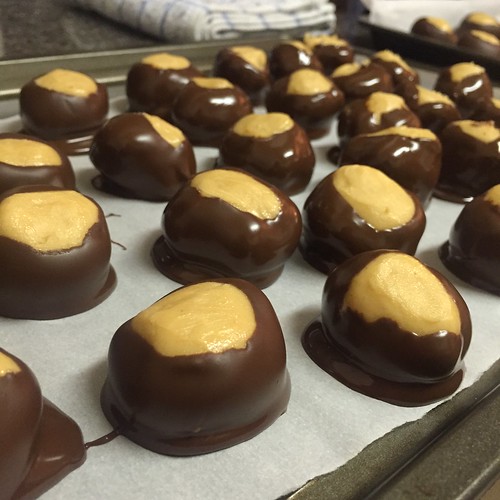 But let's go back to 1788 and the settlement of Ohio. Captain Daniel Davis led the way and as the second man ashore at Point Hamar, declared he cut the first tree, a "buckeye" tree. The Native Americans already occupying the land, dubbed another settler "Hetuck", meaning eye of the buck deer, or Big Buckeye. Subsequently, "Buckeye" became the nickname for people in Ohio, the tree became our state tree, and in 1950, Ohio State University adopted the name "Buckeyes".

A delicious peanut butter fudge dipped in chocolate to resemble the tree's nuts certainly isn't the worst thing Ohio can be known for ;) ...

We all make them slightly different. Many have the "perfect" recipe or the "best".
But none compare to the simplest, sweetest, most satiating candy nuts of deliciousness...

Here is what you do! (without revealing any of MY secrets...)

Get your favorite peanut butter (1.5 cups), pure vanilla (1 tsp), softened butter (1 cup), and confectioners sugar (6 cups). As you mix this up, it becomes a dough or fudge like. It's up to you to add a little bit more of this or that to perfect it. I like to move the ball of "dough" to waxed paper and work it with my hands mixing all the confectioners sugar in. Now roll it into bite size balls. They don't have to be perfect! 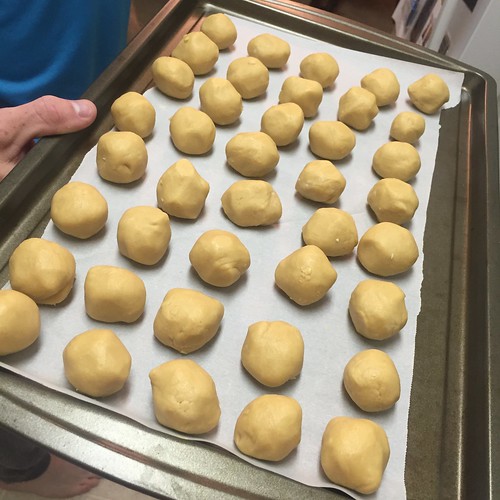 Throw those in the freezer for about 30 minutes. They have to be good and solid to work and hold the chocolate. You'll see! And while they're solidifying... grab semi-sweet chocolate chips (4 cups) and melt them in a double boiler. If you don't have a double boiler or know what that is, grab a big pan and put water in it. Boil it with a sauce pan sitting down in it. Stir the chocolate while it heats/melts. It will scorch fast so keep it stirring!! 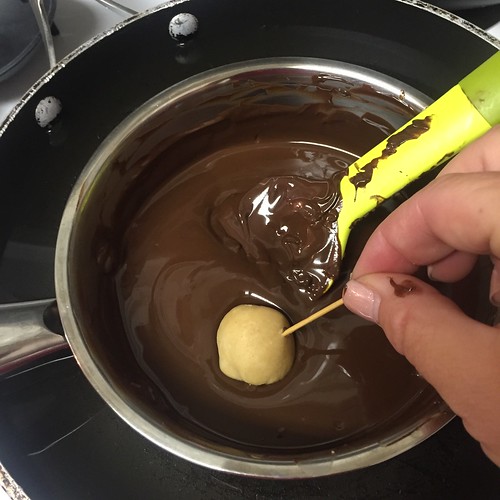 When the balls are ready, take one at a time, toothpick it, and dip it in the chocolate leaving the top of the ball exposed so it looks like a Buckeye. 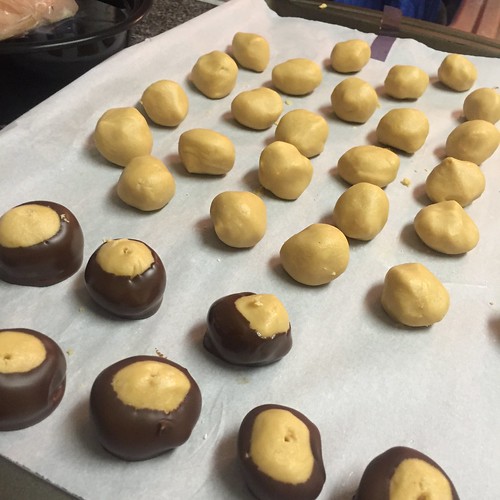 Set on wax or parchment paper to cool. Repeat!! As the dough softens, it'll be easy to smooth over the toothpick hole leaving the candy to resemble the Ohio Buckeye. You can store these in the fridge or on the counter. They don't HAVE to be refrigerated though is my point. I don't suggest leaving them in your car though (DOH!).

I'll have some at the shop on Wednesday so if you want to try a Buckeye made by an original Buckeye, pop in and try one!! ;) ;)
Courage. Confidence. Determination.
If You Never Tri, You'll Never Know!