Self Proclaimed Fat Guy Does an Ironman 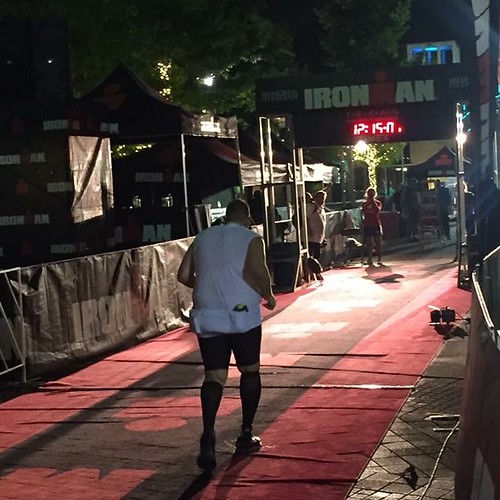 
I would say that any journey begins with a single step, but wow, that would be an understatement.
Where do I start... a crazy dream? Pick the hardest thing you could imagine yourself doing and then decide, "I am going to do this!" Hello... HELLO, you just don't do that. But why not try?

Well, I decided to do just that. After a year of weight loss with one of the best trainers in Slidell, Mark, I was encouraged by Sherry and her husband Benny to do the Tri thing. Swim/Bike/Run. Only problem was that I couldn't swim and I still weighed more than the average bear. I had also never run more than 3 or so miles. So we decided to do a half marathon, and oh boy that was fun, so we did a full marathon two months later...

But that wasn’t the real problem, I couldn’t swim and not really sure that I am that great now. So off to find a swim coach. Enter Rebecca, I managed a few months of lessons and then it was off for my first triathlon last year, a half Ironman, which is 1.2 mile swim, 56 mile bike, and 13.1 mile run.

Ahh, but before I forget, I had to buy a bike, shout out to Donald at Bicycle Connection in Metairie. No funny stares when a guy walks in and wants to buy a tri bike that weighs twice the weight of the average triathelete. But biking shouldn’t be hard right, everyone loves to ride a bike. I think we all say that until about mile 30 or 40 or maybe 50, then things start hurting... but back to the story...

The first New Orleans 70.3 came and went. Finished! Done! That was awesome, maybe I should do a whole bunch of these before attempting the full distance Ironman race. Well, it didn't take long for me to be motivated to try this. Got put in touch with an awesome coach named Lisa McCombs who did what any coach would do, MOTIVATE you!!!! Sign up, "you can do it" she said!!!!!

Well that was back in June, fast forward to this week. Boy so many things have happened. A DNF at this years New Orleans race, talk about something to knock your confidence for a loop, it did for me. Like everyone else, health issues, personal issues, life, life gets in the way, then all of a sudden the week is here to travel to the face the monster that has been hiding under your bed now for almost a year...

What can I say about the race? Well, it’s done. No, really it was fun! I would do it again and I plan to, but what a day. I have a habit of not sighting too well in open water; no line to follow, I typically swim a few extra hundred yards and at my speed, that’s not good. Texas Ironman was no different. I swam an additional 500 yards according to my watch... ugh. But I made it. When I say I made it out of the water, there is a cut off time, for this race 2 hours and 20 minutes. I thought I could do the swim in 1:40 and it took me almost 2 hours, but then again, I didn’t plan on the extra 500 yards of swimming. But I made it.

Remember the story of Jonah? Praying in the belly of a fish. If you have ever read his prayer, it is a combination of Psalms from what I can gather, I get it Jonah, I don’t think I recited one Psalm word for word, but boy did I do some praying!

Well, out of the water and on to the bike ride of 95 miles on lovely Texas roads. A typical Ironman bike portion is 112 miles, but this year they could only permit 95, so guess what, you race what they give you. But before you get on the bike you get to go to a changing tent, somehow I took like 17 minutes in there? What? Not sure what I was doing, but I wasn’t sleeping... and I still didn’t apply sunscreen on my face, which I paid for later.

The bike ride was a tour of mixed sights, industrial parks, feeder roads to the interstate, back state highways and subdivisions. What a mix, but again, I survived the cutoff [the half way point] and made it to the end before the final cut off for the bike portion. No problems with the bike, Cervelo makes a heck of a bike and by the way, it handles the big guy! though probably not under warrenty any more...

The run, ahh, the run, my least favorite thing some days. When you are as big as me, running is not fun or pretty. I don’t glide, I don’t get a runners high, notta, nothing like that. Well the first couple of miles I felt pretty good. I was on a run/walk plan, run a minute, walk a minute, 26.2 miles of this. But before you knew it, I was walking and not running. My stomach was killing me. Been there, done that before... and still haven’t fixed that problem yet.

The one thing about this sport is that there is caring and compassionate people out there on the course with you. One guy slowed to a walk to check on me, kept motivating me, and offered a mint to help settle my stomach, class act!

But... by mile 12 or so, I had decided this was the stupidest thing that I had ever decided to do. There is no big fat guys doing this race, am I stupid or something...? What’s wrong with me, stop it, my stomach hurts, I want to stop!!!!

I had planned it out. In the next 3 or so miles I would see my wife Peggy and I would take off my timing chip and give it to her to turn in and I would claim medical issues. I had plenty of time left, no one would think anything of that...

Then, like just when you think you are all alone... from the back I here “Paullllll”, "it’s me, it's Lisa McCombs", running like the excited girl she is.... “it’s you! I found you”.... ugh, no getting out of this now, Lisa is here... Her first question, where are you at? She wasn’t talking about GPS coordinates, she was talking about state of mind..... I couldn’t lie, so I said, done, I am done, I don’t want to quit but my stomach is killing me. Then started a 3 or 4 hour motivational coaching session on her part. Over and over again, keep going, it’s going to get better, you are going to finish...

My son Seth joined on and off for the next few hours and my brother in law James stayed with Lisa and myself for the last lap around. Those last 9 or so miles were pure hell. I wanted to stop, I bent over, I gave up, I wanted to cry, you name it and I probably did it or said it, stop the pain! But no.... no, pain is temporary they say, Ironman is forever they say...

That is the game that starts in my head, the one voice, you can’t do this, versus the other that says, you're fine, knock this out. The devil was winning right about then, I wanted to stop. I wanted to fall to the ground, fake an injury, and just stop... I can do this again I kept telling myself.

But Lisa and James did not give up on me and before long, in the last four miles or so, two angels appeared out of the darkness waving glow sticks and sharing blinking light rings... Jenna and James appeared and took over the motivational speaking engagement. Shake it out, head up, arms swinging, hands relaxed, breath... over and over again, these RWB members said “no one left behind” was there motto and they didn’t have anything better to do on a saturday night...

Well, I am sure the entire group was done with me by mile 26, but they did what they set out to accomplish, help me find the strength to keep going. Boy, I owe a lot of people for this one. Coach Lisa was dead on, finishing this will define you, and she was so right. Thank you Lisa for believing in me even when I didn’t believe in myself.

For those angels that came in the dark, a salute to the Veterans, you guys are awesome.

To the security people, the course workers, the countless volunteers that kept me going... Thanks!

To the guy who posted my picture on a Facebook group of me finishing the race, thanks.

To my wife, I love you, you're the best.

To my savior, thank you Jesus

Lessons learned, too many to write now.

Dream big, because dreams do come true.
Set a goal, and have a plan.
Stick to the plan and you will accomplish the goal.
Surround yourself with great people, they will lift you up when you are down
and NEVER, NEVER GIVE UP ON YOURSELF, you will regret it.