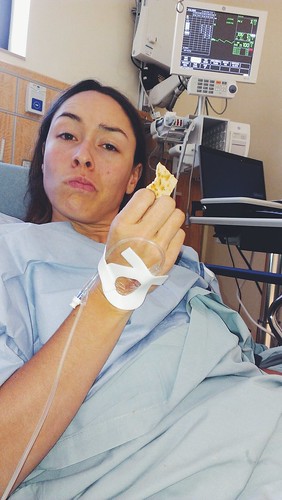 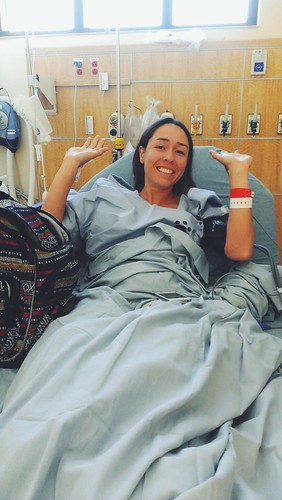 We have recently left you guys on the edge of you seats with Lisa posting a photo of me in a hospital bed. To some of you, it probably wasn't a surprise because last year I found myself strapped to a hospital bed a couple of times. This year I purposely put myself there.

This wasn't something I wanted to share, but … well I guess it was something that I felt as though it should be kept real. It's something a lot of us deal with, but then there is no way in hell we would really talk about.

So last year I had some stomach issues. After the fallout of Rev3 Cedar Point, it got pretty serious and it was time that they dug deep (INSERT YOUR OWN ASS JOKE) into what was causing all the havoc. They eventually found a bacteria chilling out in my intestines, that contributed to me being sick from May through September of 2013.

I was sick all the time. Never felt good, spent most of the year with stomach pains and random bouts of extreme stomach viruses. It was terrible. Lisa was (and still is) hell bent on me having some extreme disease, I swear she wants me to come out of the doctor's office one day telling her that I have some crazy unheard of disease from 600 B.C. No worries, I don't have a disease, that they know of yet.

Since October of 2013 I have changed my nutrition, and went PALEO. This has helped tremendously. My blood sugar is controlled, no more stomach problems (I did have to be put on medication after they found the bacteria in my stomach), became stronger, recovered faster. Things were/are great.

Though I can control my stomach now, the damage has already been done. This became evident at the end of 2013/beginning of 2014. At races my stomach would turn or I would have so much "ass pain" that I would have to STOP running and walk. There would be times that I would try and pick it back up, but tears would be in my eyes.

This past Rock N' Roll New Orleans half, I found myself crying the last couple miles because I was in so much pain. The pain was so intense, the tears just came. It was bad. I felt beat. I knew something was REALLY wrong. It had gone past the point of no return. Like C'MON! Why!? What is it!?

Once back home I made an appointment with my doctor. Normal doctor was on leave, so I had to meet up with the physician on staff who was completely terrible. I was informed that my "ass pain" was most likely internal hemorrhoids and it was something I would just have to learn to deal with. He gave me suggestions to help reduce pain. I had already googled them all (because of course I had to WEBmD it, I figured I either had to have colon cancer or internal hemorrhoids).

Let's go on about 2 more months, the kids got CRAZY sick, then I was starting to feel like ass, all of this a week before Ironman Texas 70.3. So, I made the appointment to go in to my doctor for preventative measures. This time it was my normal doctor. He saw that I had come in previously for pain and asked me how things were going. I told him I was told that it was something I had to live with, and that it was terrible, and that I couldn't get through my runs, and that …. and that… and that…. I had a mini meltdown.

It was my job to make the appointment…. I never make appointments, and he knew that, so the next day I got a phone call saying my appointment was made. Also an appointment for a colonoscopy. 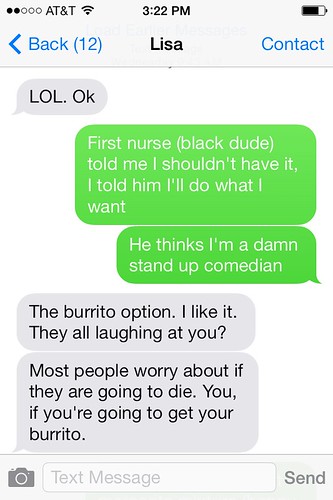 Fast forward to day of surgery:
"Dude, All I want is to eat a burrito, I am starving"
"Ma'm we suggest that you do not eat HEAVY or SPICY"
"I'll do what I want."

Thats me talking to the nurse who is checking me in to my outpatient surgery as I am snuggled up in the blue paper gown. Nurse was a big ole black dude, he first looked at me like I was crazy, then started laughing. I continued staring at him…… "Seriously man, I am hungry"

The entire time I harassed people about my burrito. Poor student nurse…

Teaching Nurse: "Choose this vein right there"
Student: " This one…."
**inserts needle**
Teaching Nurse: "slowly move it back out, and take it from the outside"
Student: puuuuutttttinnnngggg it riiiiiiiiight theeeeerrrrrreeee"
ME: "ARE YOU HAVING SEX WITH MY HAND?!"
Student: "Wasn't that bad was it?"
ME: "I've had better"
Student & Teaching Nurse: "WHOA!"

After the IV was set up I met up with 3 different anesthesiologists. My choice of sedation was game planned on getting me out of the hospital as fast as I could and without nausea, all so I could eat my burrito. I am not kidding. I was given 2 original options of general anesthesia and or spinal sedation. One left me feeling nauseous, and the other kept me in the recovery for 2 hours until I could feel my legs .

Both not getting me to my burrito any faster. Was I scared that I was going to be having my internal hemorrhoids banded? Hell no! These people have starved me. I needed substance. I wanted the damn burrito. Plus doesn't a burrito sound better then thinking about someone toying with your ass?

Of course I remember nothing of surgery. Last I remember was talking to everyone in the surgery room about the best local mexican food…. then I was in the recovery room.

First thing I did once waking up was eat my snacks I brought in with me. I knew my blood sugar would at one point bottom out, so I came prepared. I felt AMAZING after surgery. No nausea, no pain, I was happy. Happily ate my food, welcomed Lisa to my recovery stall…. and then….. my leg started twitching…. and I was kinda shaking….. it HURT it a WEIRD way. We had to flag down the nurse, she gave me drugs for the pain right away. It took the edge off. Then I was still shaking, she doubled up on the drugs.

This is where Christina feels like absolute crap and starts to think she is a martian, where she is left alone in her bed, as she falls in and out of sleep, having nightmares of zombies, and dreams that just didn't make sense.

The drugs made me sick. Barely remembered being wheel chaired out, we somehow got my burrito, apparently made a trip to the shop, then made it home where I can remember myself sitting at the kitchen table staring at Lisa talk, and me wanting to eat my burrito but I was too sick to eat it. Oh, the irony.

I slept all day. Did it hurt? Yes. I can't describe the pain. Its weird. There is pressure. It hurts. I slept all day till Lisa brought the kids home. I don't even know what the kids ate for dinner. Lisa, did you feed them?

Now picture me at midnight, shaking, in pain, not knowing what to do, taking more drugs, and coming to a realization that MAYBE I just might NOT be able to sit on my bike in the morning for a 100 mile bike ride…..

No worries. There was some weird pain come morning, but by the time I was done taking the kids to school, and getting my cycling gear ready, I was already feeling fantastic enough for a long bike ride :)

Thank you to Lisa for being there for me all day, making sure I was O.K, never ending ASS jokes, picking up the kids, maybe feeding them (I don't remember) and taking my ass for a burrito.

So there you have it. I had ass surgery. Life is a pain in the ass. Literally. Pain is only temporary.