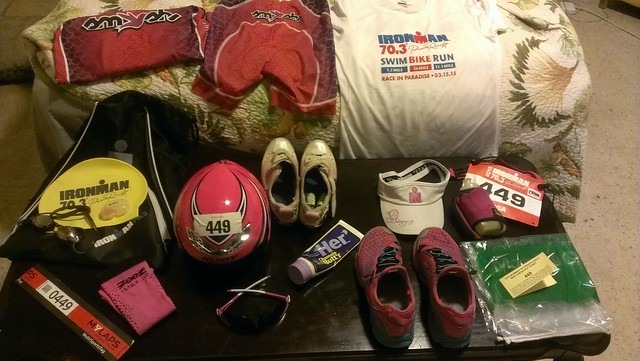 There's a lot of "almost" today. For example, Amanda and I watched a guy almost get ran over by a car (probably a drunk driver) <--- Amanda almost pooped her pants! I almost drowned in the swim. Any of my friends were almost a part of a gang shooting on the bike course. The run almost killed us all. In fact, we almost walked the entire thing! Jason almost wrecked due to a Gu packet. Amanda almost got taken out by bib #652, 18 times! Good thing almost only counts in horse shoes and hand grenades!! 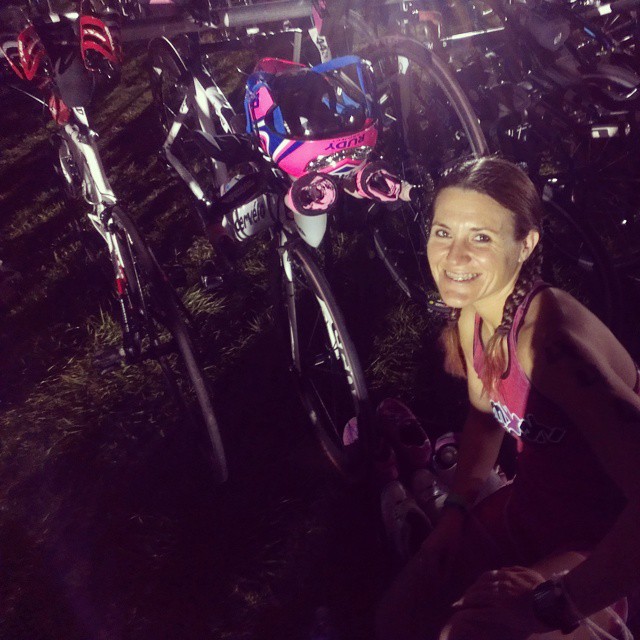 It was fun setting up my transition in one spot; without a bunch of bags. My tires were low again. I have to get this figured out by IMTX. I keep losing air!! I've changed the tires, the tubes, and everything in between. Keeps happening... 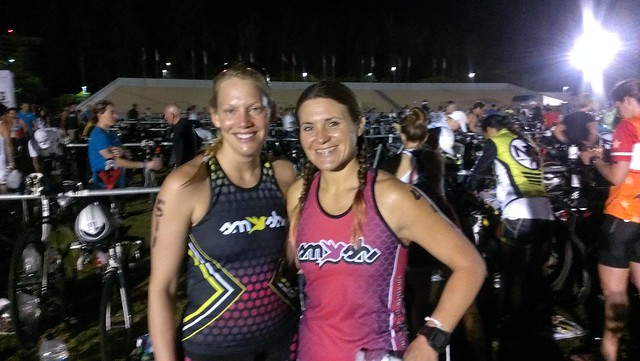 Checked on Amanda; looks good, Jason is done, we walk to the swim start (about a mile away). On our journey there, some idiot (probably still drunk from the night before) is hauling ass around stopped traffic which is waiting for a van to turn left. Screaming brakes, smoke, horns, terrifying CHAOS, and there's an athlete standing RIGHT THERE. I wonder if he even realizes how close to death he was. If the idiot would have t-boned the van or made one single different move, that athlete would have been struck. We were frozen by the scene and it was tough to let go of...

Arrived at our beautiful swim start: 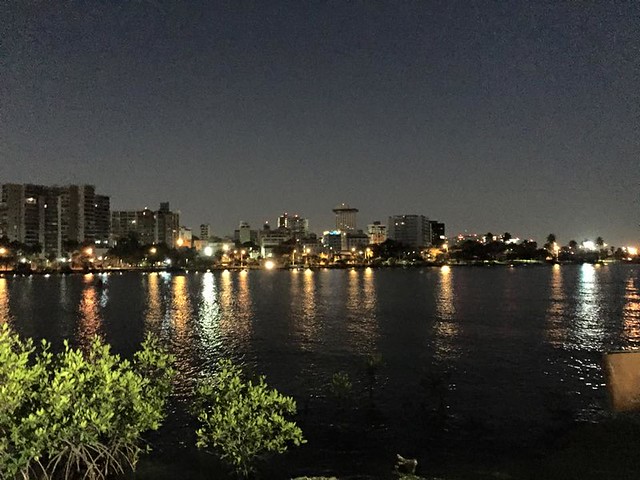 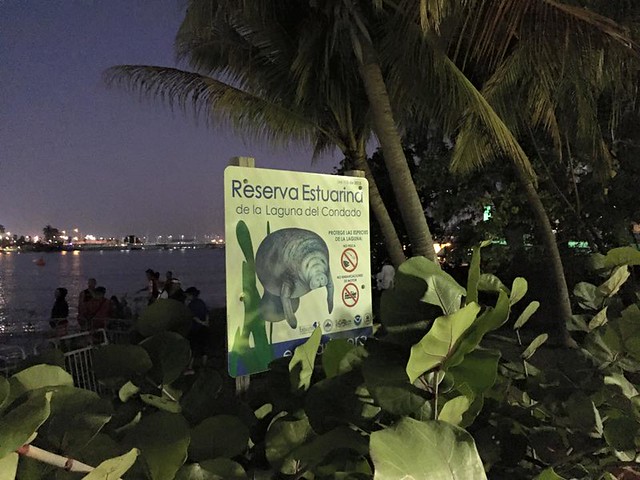 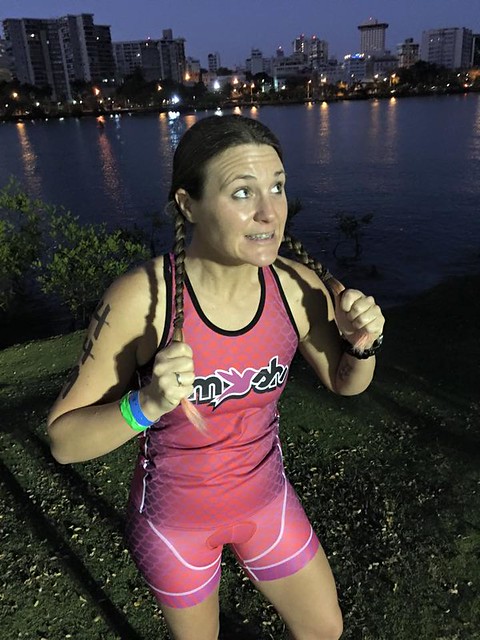 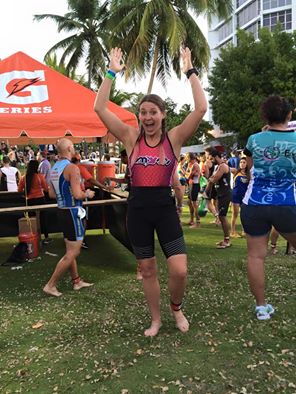 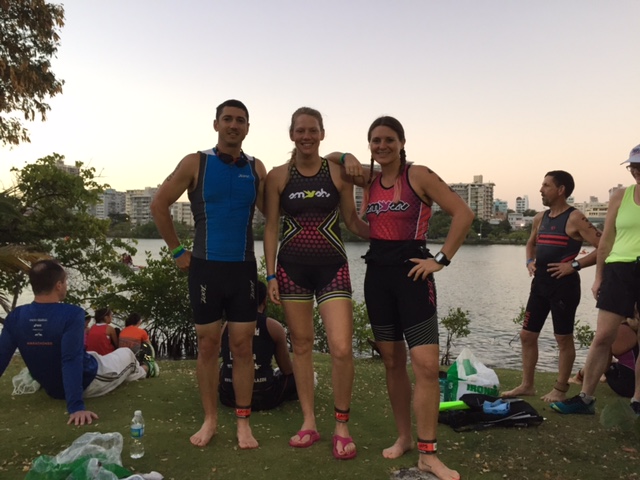 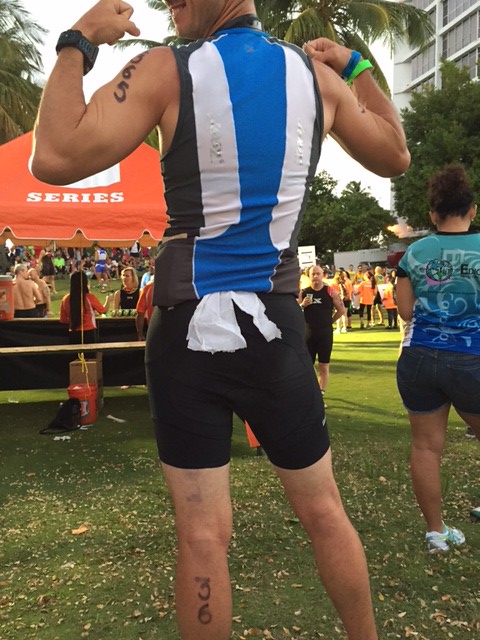 We had about an hour to hang out and watch the sun rise.
Swim: 1.2 miles in the Condado Lagoon, Puerto Rico, mostly flat, wind chop and chop near the mouth of the ocean. One loop with separate start and finish areas. We went in in age group waves. Truth be told, I was terrified. 1, I haven't pooped. 2, no wetsuit. Y'all know how I am about my wetsuit. I've only done 1 other 70.3 without it and no 140.6's. The good news, I had my Zoot Speed Suit and it was salt water (extra buoyancy). I thought about my team and knew what I'd say to them so it wasn't even a question about what was going to happen. Not a lot of time to think anymore, get in the water. Ready, set, GO...

I got a little beat up at first but stayed right in the mix of the yellow swim caps (my age group). I felt good, strong, and buoyant! Buoy to buoy chick, buoy to buoy...

The chop was mild until we reached the mouth of the ocean. It got a little swelly and then a strong pull near the bridge. The water was about 80* and perfectly clear! AND, we got to swim with manatee's! Oh, my almost drowned experience - some guy grabbed my calf and was pulling me under! I finally got the lead out too!
(side note, check out the pic of Jason with toilet paper STUCK in his shorts - bahahahahahahaha!!!)
Total time: 47:10. It wasn't pretty, but it's not ugly either!

Bike: 56 miles on the northern part of the island, mostly flat, a few short hills, windy. Out 12 miles, 2 loops, back 12 miles. The course was pretty flat, just some bridge "climbs". It was a closed course (on our side of the highway), pretty crowded, and kinda bumpy; I've never seen so much "stuff" laying in the road <--- water bottles, cages, tubes, etc. And there were a ton of dead iguana's and dogs. I think iguana's to Puerto Rico are like armadillo's to Mississippi <--- seen mostly dead on the side of the road! It was hard not to draft, but it seemed the officials were very aware of that. We were flying. We had a real decent head wind then cross wind then head wind but like I said, we were flying! I averaged over 19 and there were times I was pushing 25+ on a flat. I was complimented several times on my pink and for being a strong chick. Yeah baby!! 2:53, 19.4 average <--- that's with a stop to refill my tires again!!

Confirmed: a gang shooting took place on the bike course. Two athletes were injured in the crossfire; both in stable condition. Puerto Rican man shot in the left side and Wisconsin lady shot in the calf. Another cyclist was involved in the wreck and couldn't continue. I pray they all recover quickly and are able to continue pursuing their Ironman dreams... It's really a shame. Gangs suck.

Run: 13.1 miles of HILLS, through Old San Juan, 2 out and backs, HILLS. Have I mentioned the hills on this course? The elevation picture online is BULLSHIT. There were at least 3 serious climbs and then 5-6 moderate climbs x 2. It took me about 3 miles to even find my legs and I literally walked every hill; in fact, everyone did! I didn't see anyone actually RUN any of the 3 serious climbs. And it was hot. I love hot, and it was hot; just not used to it yet. But thank goodness for water hoses and volunteers!! They were dumping ice and water on us all. I was fortunate to run into Russell (another friend who happened to be doing this race) and we ran together for a short time; that's when I was really able to find my legs again.

The scenery on this course is absolutely gorgeous. I wish I could have carried a camera with me; I can't even describe it. Ocean front, architecture, the cobblestone... it was so cool. The worst part, my back seized up (which is common, but it usually releases). At one point, it was so knotted that I felt it through to my gut which led to two potty stops. Y'all prayed too hard for my morning poop! I took advantage of the free massage at the finish line and got it all worked out. She said, "WHOA, this is too tight!" I had some calf issues too. Maybe due to the hills? No stopping Ironman girl though... I ran and walked and chatted and iced myself down for a ... 2:40 <--- worst run ever in the history of Lisa. It's so okay though because I had FUN!

Hung out at the finish line for Amanda's big finish, grabbed that massage, a slice of pizza, and our gear. We then BIKED back the 3 miles to our house. Stupid! Stupid stupid stupid! Not only was it dangerous amongst PR drivers, but it just sucked after finishing a 70.3.

Dinner at Mango's for post race celebration and a quesito from Kasalta's. 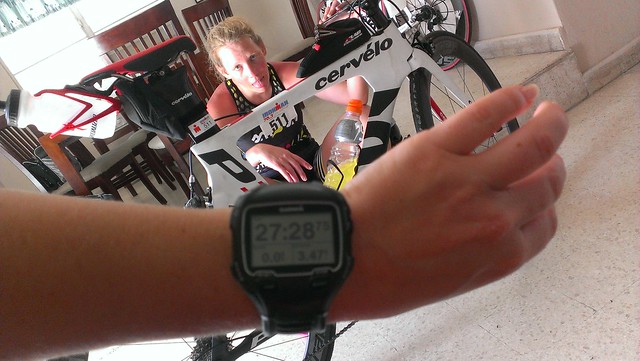 Overall, I'd say this is a great destination race! It's definitely beautiful!
There is a TON to do here. I need a special vacation back to visit the beaches and must see spots that we weren't able to get to. We had fun, shared a lot of laughs, made some new memories, and learned some valuable lessons. We also rocked out a 70.3 WOOP WOOP!! 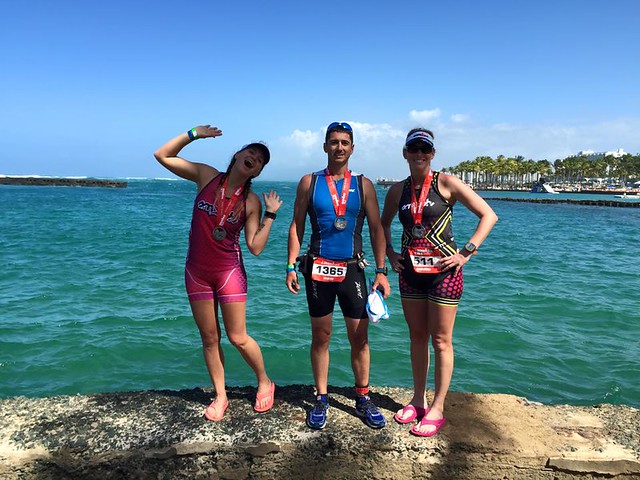 Thank you for all your cheers and motivating words of encouragement. I have the best support crew in the whole wide world!! 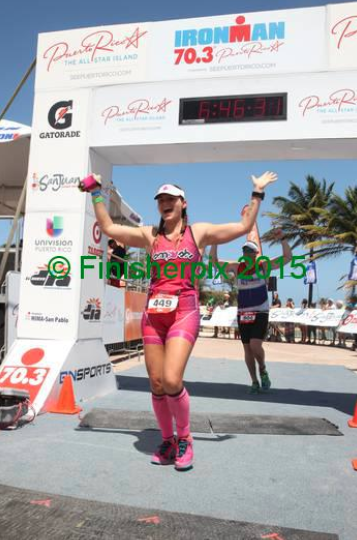