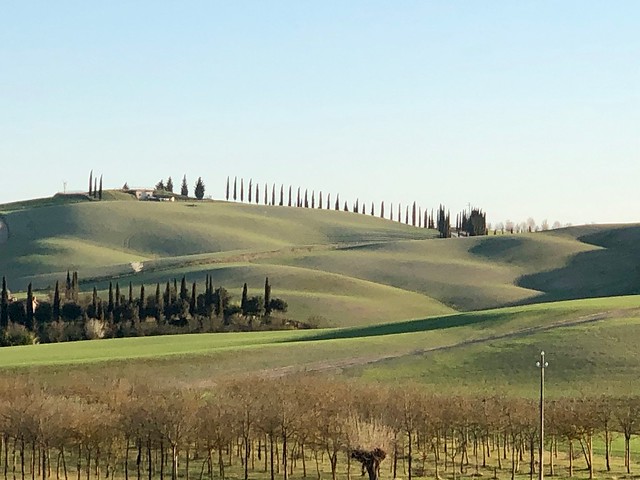 The Val d'Orcia is a sub-region within the region of Tuscany.

This area of Tuscany, which stretches along the provinces of Siena and Grosseto, hosts endless rolling hills covered with grain or sunflowers, a rich green valley which encompasses the Orcia river, solitary lines of cypresses, and the vineyards of the renowned wines of Brunello, Montepulciano, and Val d’Orcia DOC.


Many of the small villages sit on the the Via Francigena which was an 1,800km pilgrimage route that connected northern Europe to Rome. Today the trail is well marked, hiked by travelers across the world, and protected by the EAVF. I would love to actually CYCLE this path in its entirety. Someday.
Very helpful link to the Via Francigena here. 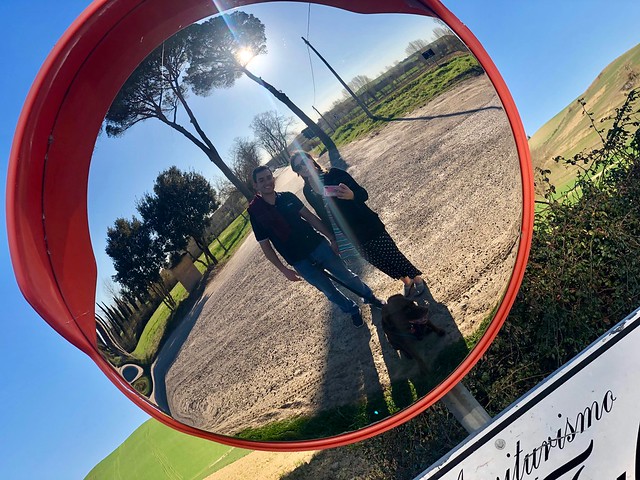 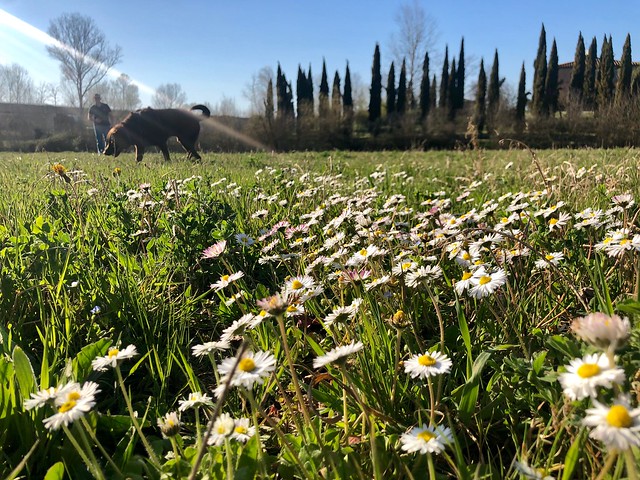 Our Mini Escape
I carefully selected an array of these Tuscan villages to spend a weekend exploring.
We picked an AirBNB just south of Siena in Monteroni d'Arbia. Arriving on Friday (by car from Sarzana) we were delighted by the quaint, clean town of Monteroni d'Arbia.

In the middle ages, this area was the agricultural center for the Republic of Siena. Its name derives from its hilltop location (on Monte Roni) along the Arbia River. Along our drive we were surrounded by rolling hills of vineyards, olive groves, and fields preparing for poppies and sunflowers.
Cypress trees line many of the area's lanes which makes for spectacular photos and really makes the castles, villas, and farmhouses pop. THIS is what I thought Italy would look like; THIS is what post cards are made of!

The agriculture importance of the area dates back to the 1200's and probably even earlier!!

One of the great landmarks include the Grancia di Cuna, a fortified medieval farm, in the nearby town of Cuna. I don't know if I'd characterize it as "great" but it was definitely interesting. 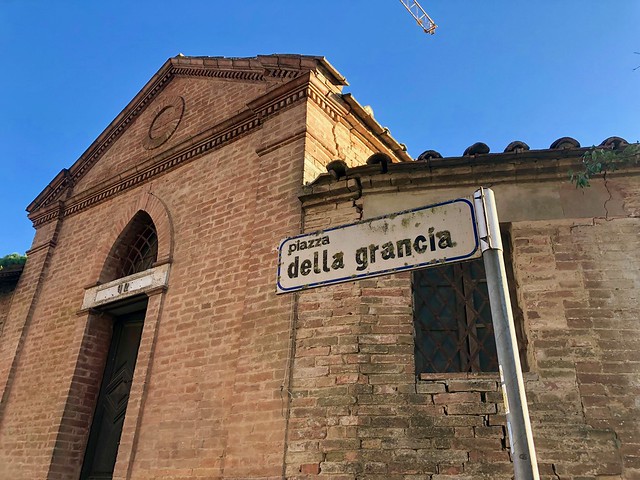 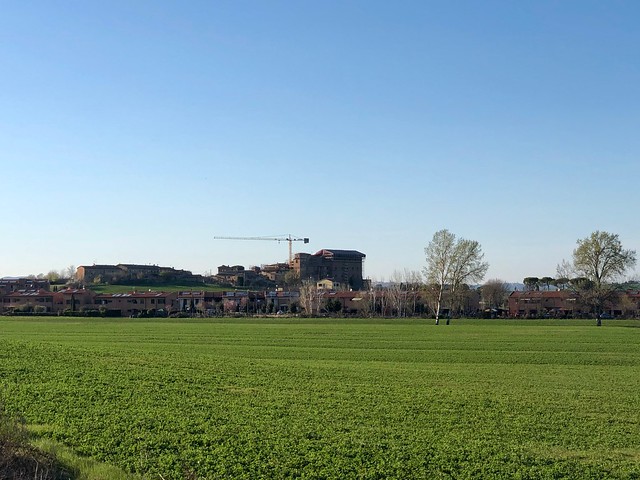 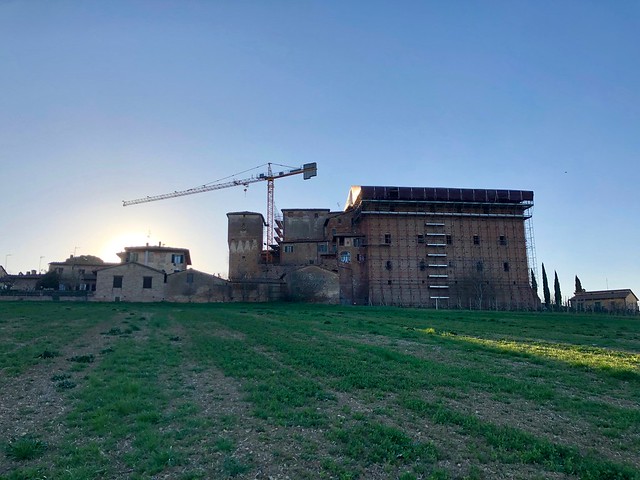 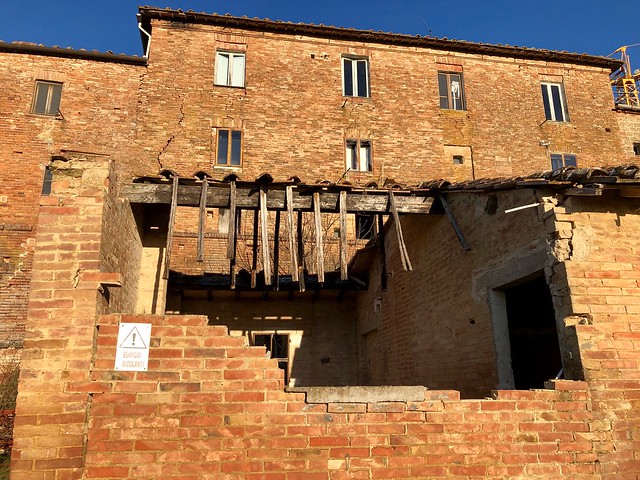 Approaching the enormous red brick structure, we were filled with both a sense of exploration excitement and disgust. The building, while marketed as conserved, is very broken and falling down.
Most of the structure is covered in scaffolding, which we mostly expected... but I'm certain that scaffolding is now a part of it's permanence. It's clearly not a work in progress.

We discovered that not only was this a farm (wheat/flour mill), there is evidence of a "spedale" (hospital) which gave assistance to pilgrims and merchants travelling on the Via Francigena. The Grange developed into a small independent walled hamlet, with towers and gates, houses, all with a kind of farm-fortress at the center.

They even had their own church within the walls. Guys this church is over 1,000 years old! We have some structures in the states that don't even stand for 10 years!! ONE THOUSAND YEARS OLD!

All that is the interesting part, right? The disgusting part is, people have taken up residence in this structure! Guys, the place is crumbling down! But there is lots of evidence (including their clothes hanging out windows and mailboxes outside the walls), that people have moved in. It is old and dirty and broken; I cannot even imagine what their "homes" look like inside. I mean, I'm sure they've done some remodeling, walled off their space, plugged into some electricity and running water (I hope!!)... but it is just so curious! I don't mean to be so judgey, but consider this was both a place for the ill, and dying AND it was a wheat mill farm, complete with stalls for animals. 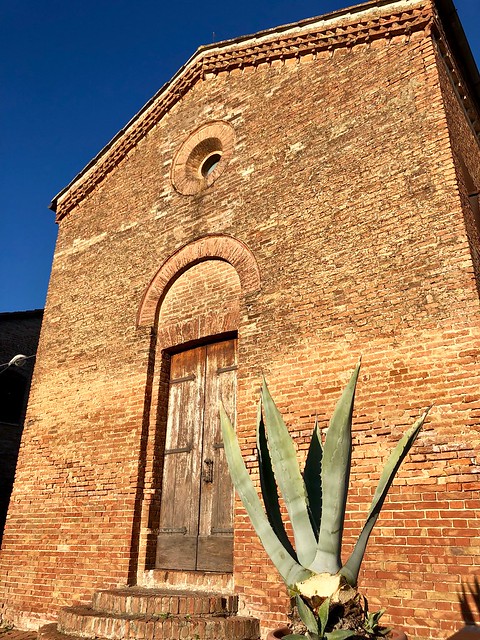 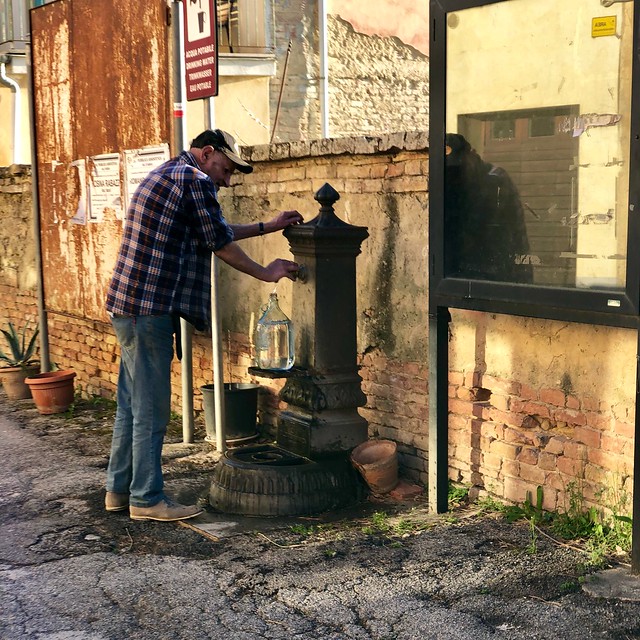 Overall, and anyway, we weren't so impressed with this "must see" site but the walk to and from was magnificent. We caught part of the Via Francigena and a beautiful sunset over the Tuscan hills. Plus Jake got to run run and play!! And we got some great photos.

Returning back to Monteroni, we discovered a park, complete with a swan filled pond in the middle of the town - very hidden by the towns structures. Children and locals swarmed the beautiful Friday afternoon! We found out that the pond is actually leftover from a fortified water mill! This place is over 1,000 years old! A final stroll through town and it's time to find dinner... 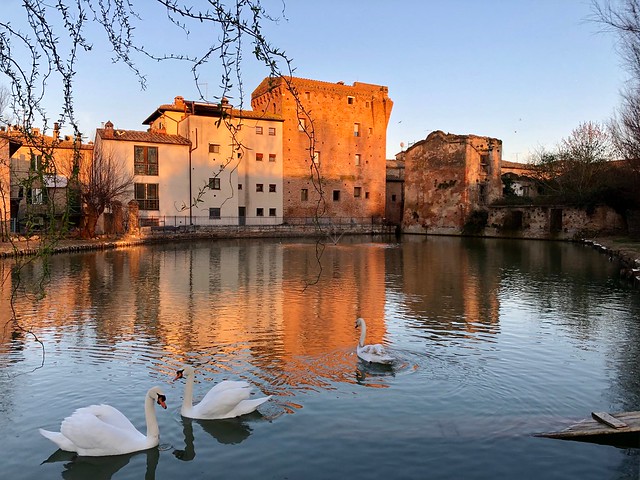 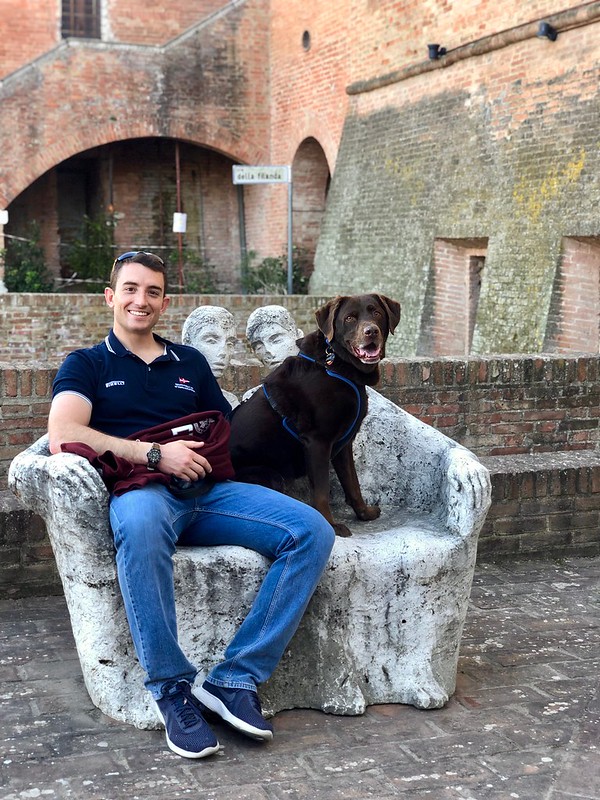 Our AirBNB made several recommendation but his ALL TIME favorite was La Valcerena. We drove the few kilometers, were the first to arrive, and filled our bellies with the most DELICIOUS local cuisine. The food was plentiful, flavorful!, the service was kind, the prices were fair. Veal, beef, veggies, and cake! 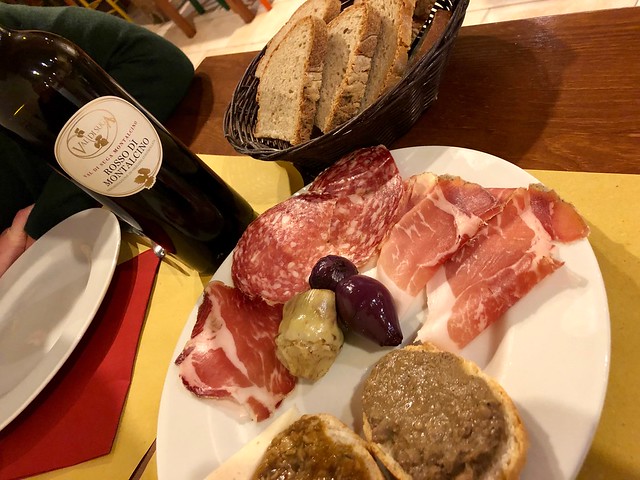 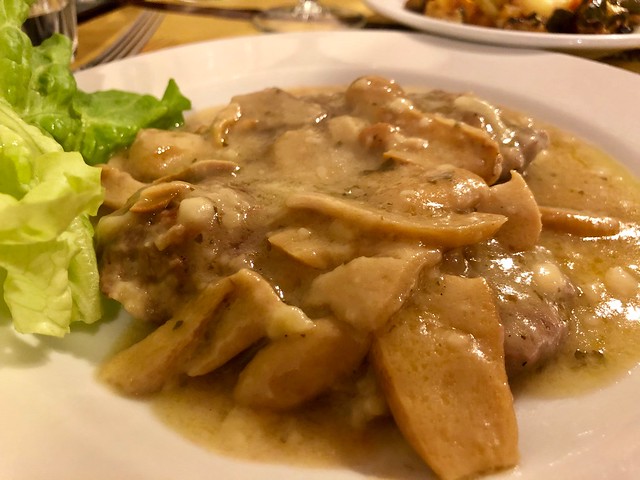 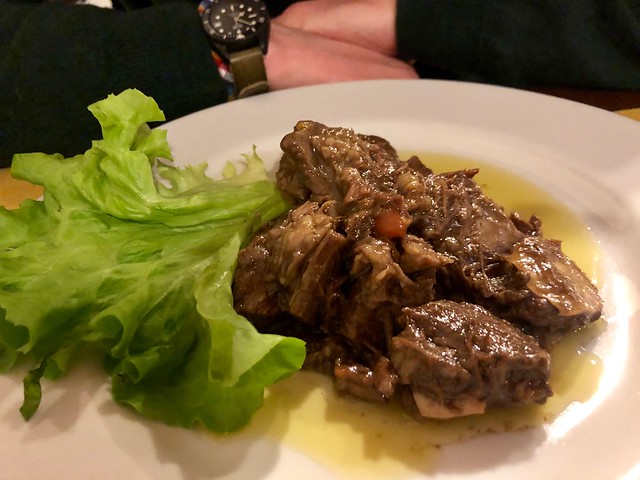 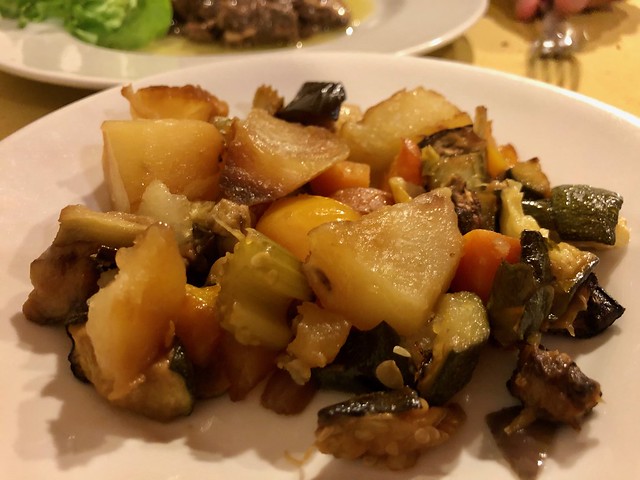 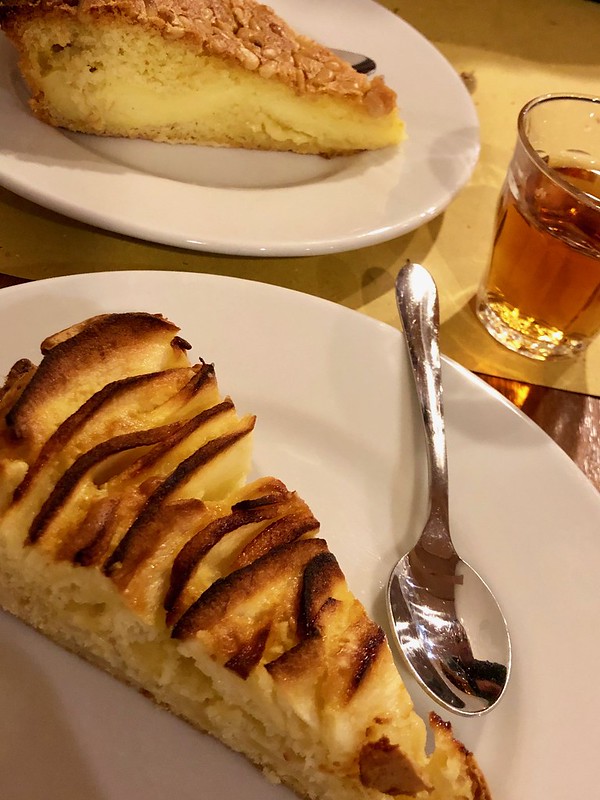 Tomorrow morning we will set out for Buonconvento (Part 2)
to Montalcino (Part 3)
to San Quirico d'Orcia (Part 4)
to Pienza to Montepulciano! (Part 5) and (Part 6)
And all the Tuscan beauty in between!!
And finally a quick exploration of Siena on Sunday.