Prague, Czech ~ The Mother of Cities 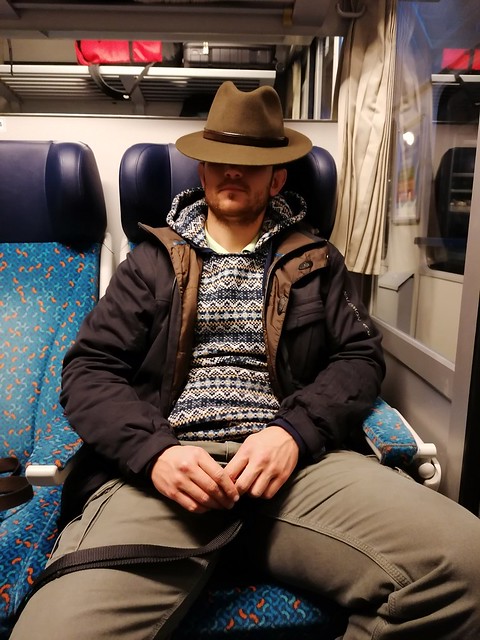 We were already exhausted arriving in Prague and so full of German food and beer we were wobbling. Still, we took the first few hours to explore our surroundings. First impression: HUGE buildings, SO much shopping, and where did all the PEOPLE come from!? 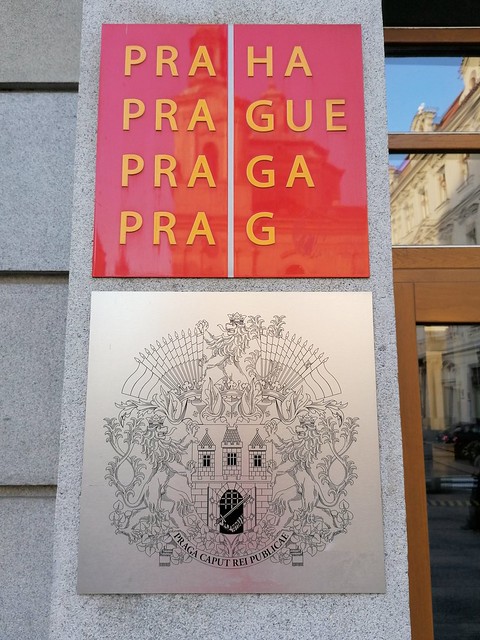 We could tell right away WHY Prague is a European hotspot - shopping shopping shopping and nightlife! Beer is basically God here, art galleries around every corner, sex, drugs, music, and did I mention shopping!? 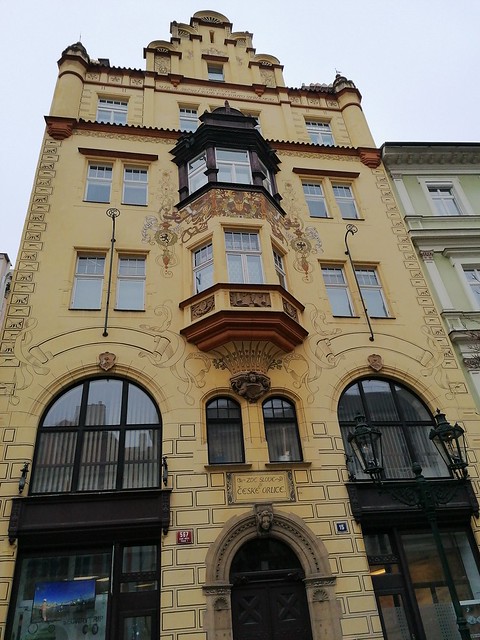 I was most impressed with the amazing, gorgeous, unique buildings. Every street offered more and more of the most beautifully designed facades! Once again we took an AirBNB and this time stayed right in the center within walking distance to pretty much everything.

So, Day 1 we explored all around our apartment and we were missing home so found the best Italian pizza joint in town and settled in with some Tuscan red wine and pizza.

Day 2 we took our free tour. We didn't enjoy this one as much as we did the Berlin tour, but we still learned a TON about Prague (the guide was a history buff!). The astronomical clock, the Black Madonna on the Museum of Cubism, the Jewish Quarter, and Powder Tower were among a few of the stop spots. Most fascinating was the story of the assassination of Reinhard Heydrich, Hitler's dude. After the tour, we hit up a local joint for lunch, took Jake for a run and then set out again.

Our goal was to get acquainted with the Charles Bridge and get more personal with the Astronomical clock. 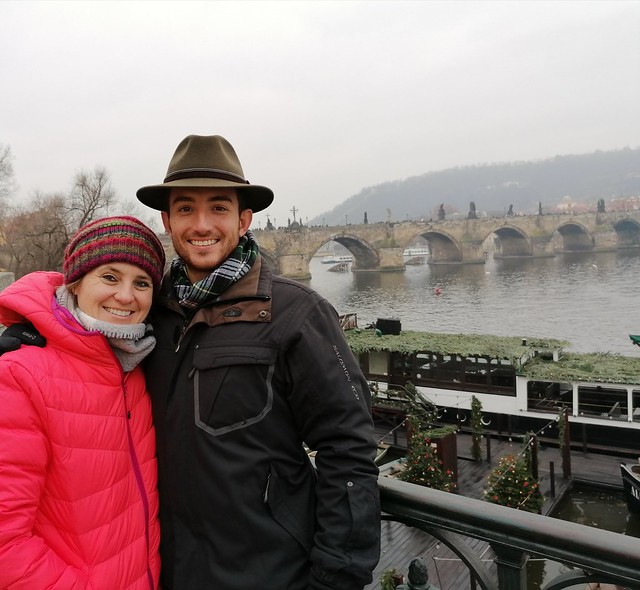 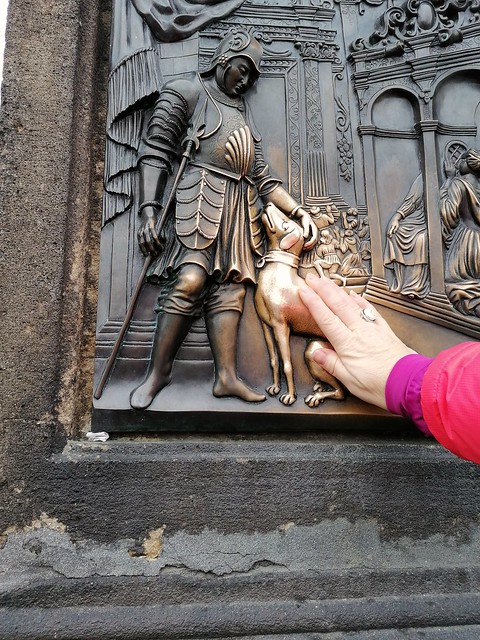 Guys, this bridge was built in 1357. It is said that egg yolks were mixed into the mortar to strengthen the construction of the bridge. Having withstood 663 years I would say it was a wise mix. There are a number of statues along the bridge that by touching them is supposed to bring good luck and ensure your return to Prague. 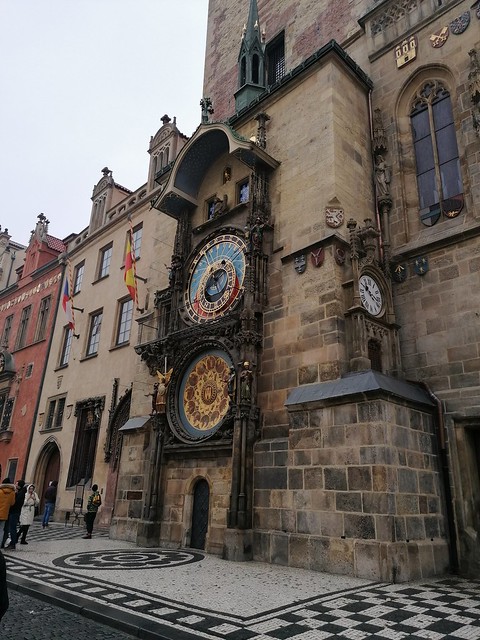 The Astronomical Clock is an astronomical WTF. It's over 600 years old, the world's oldest fully functioning astro clock, and a magnificent blend of mechanical engineering and art. The astronomical clock in Prague, otherwise known as The Orloj, shows the relative positions of the Sun, Moon, Zodiac constellations and, sometimes, other planets. It tells the time, provides the date, shows astronomical and zodiacal information, and, best of all, provides some theatre for its viewers on the hour, every hour. We continuously missed it until on purpose, we waited for it with our friends. Shoulder to shoulder crowds waiting in suspense is an understatement. AND, it's considered the 2nd top most overrated tourist attraction in the world. HA! We loved it ;) 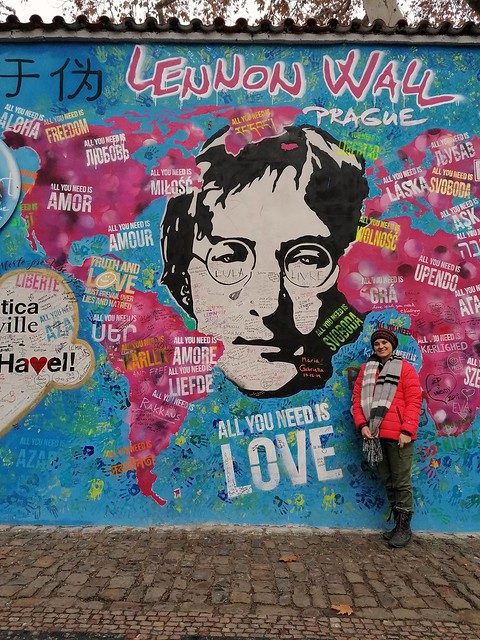 Day 3 and we're moving on to the Prague Castle Complex. We cross the Charles Bridge to find the John Lennon wall.

Post 1948 the wall of the compound of the Knights of Malta was used mainly for people protesting the communist takeover and was largely text. In the 1960’s it became known as the “Crying Wall” and was associated with protest text/lyrics and art although the authorities regularly painted over it. On December 8th 1980 everything changed with the murder of John Lennon. The Crying Wall was then the obvious place for the outpouring of grief and protest against his death and almost overnight with the painting of his face and the old gravestone it becomes the John Lennon Wall. The wall has been a victim of it’s own success with layer after layer of paint being added, parts of the wall fell down on their own. Today, it remains the only place in the city where graffiti is legal. 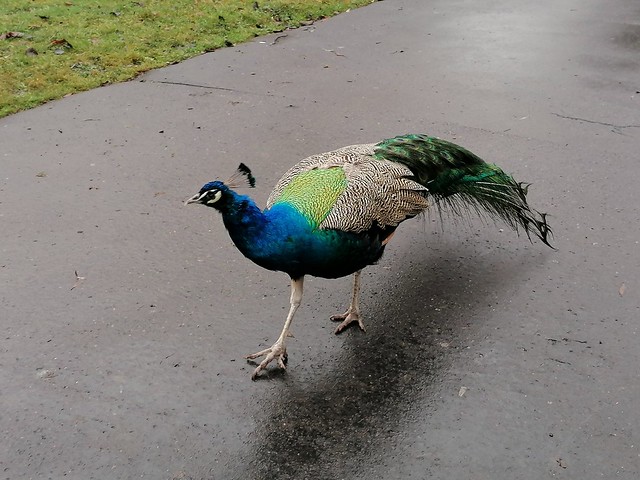 From the wall to the complex, we stumbled across a park FULL of peacocks. BEAUTIFUL!!
Climbing into the clouds we approach the Prague Castle Complex which includes: St. Vitus Cathedral (famous for housing the tomb of St. Wenceslas), Old Royal Palace (which was abandoned for a full eighty years back in the 15th century), Royal Garden, Golden Lane (a charming little alley of tiny, colourful cottages and cobbled pavements), and Lobkowicz Palace (a private property in the complex). It's really intriguing that the complex today houses the Prague government. 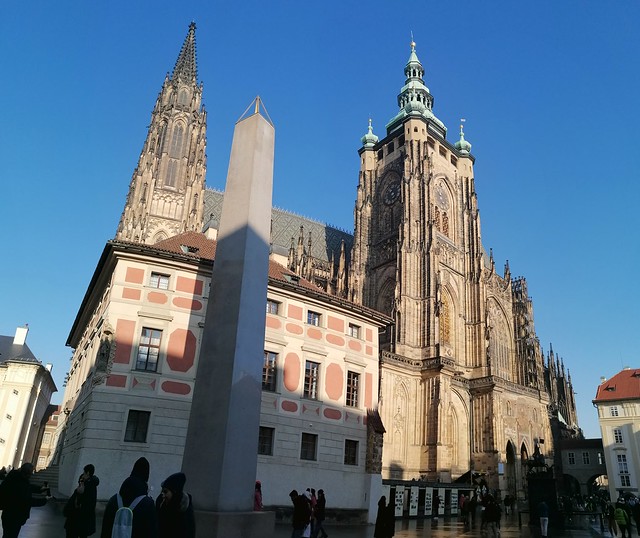 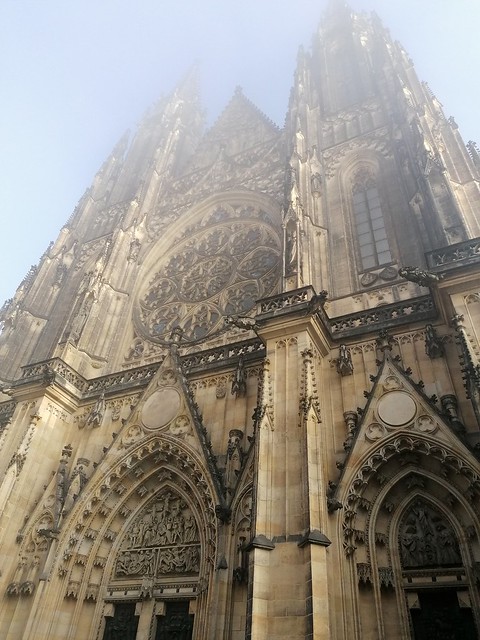 We purchased the special tickets and audio guides. For anyone visiting, not worth it! You can pretty much see all the same things for free, read the plaques, and Google any other information you want to know. We're pretty good about making the best of things though and enjoyed!

A long walk with Jake in the afternoon, more Christmas markets, and later local eats. 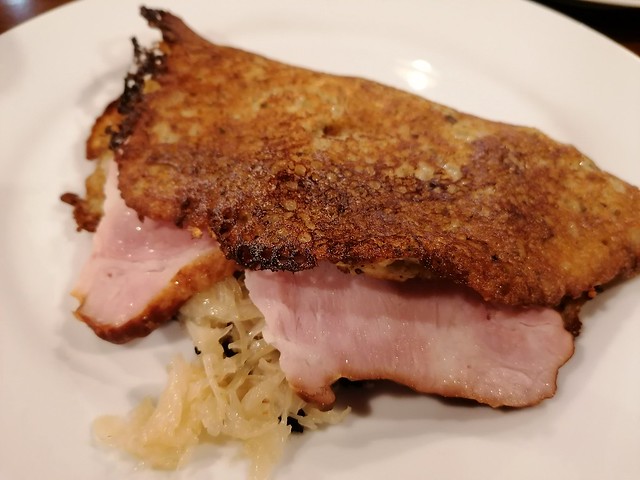 ^famous local ham and sauerkraut in a potato pancake 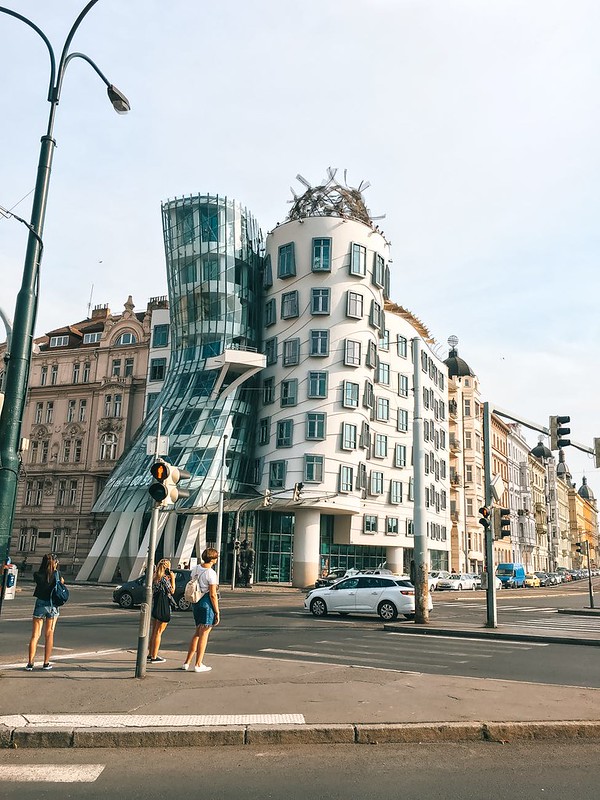 Day 4 we're up for a run to the Dancing House. This building is so aesthetically interesting! The story of the Dancing house reaches back to the end of World War II, when the previous building standing on the site was destroyed during the bombing of Prague by the Allies. The new construction would symbolize the arrival of democracy to Bohemia. 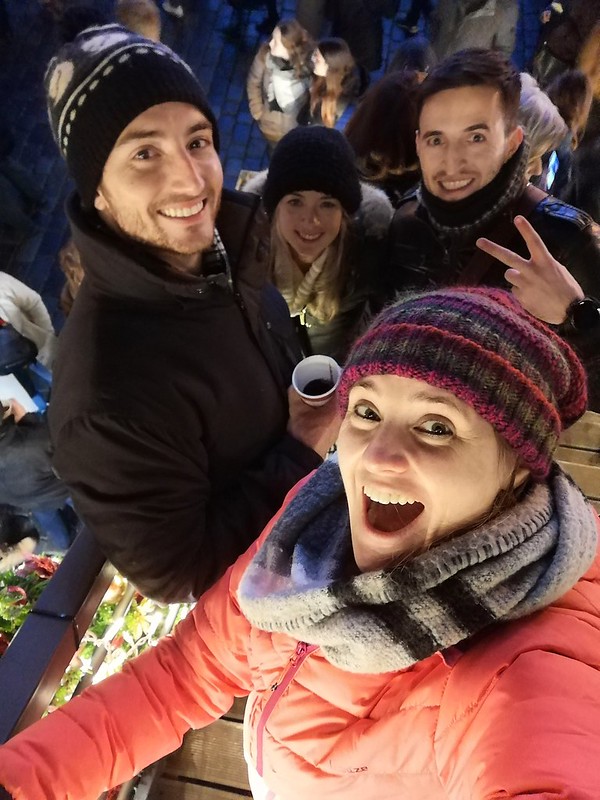 More of Prague today followed by dinner and markets with our good friend Alberto and his girlfriend. The two of them BY CHANCE were also exploring through Prague. We were SO happy to see Alberto since it's been years!!! 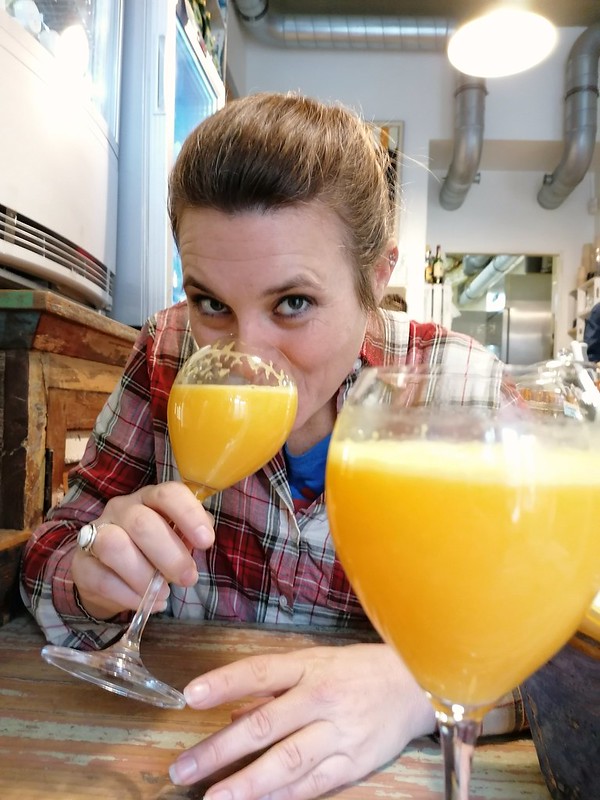 Day 5 we took a nice walk to explore a separate section of the city, found a FANTASTIC brunch spot and after Jake play, kind of rested and worked the rest of the day. Later we met Albeto and Emily for dinner. 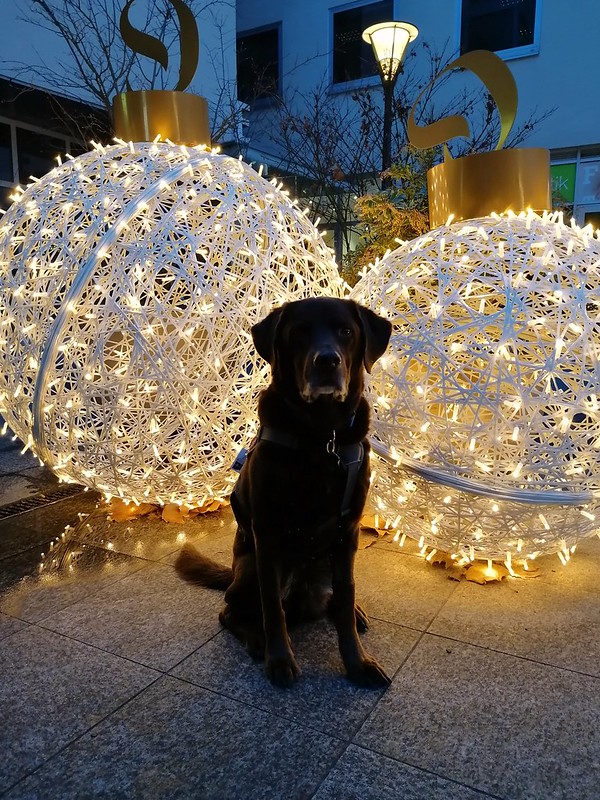 We wished Prague a Merry Christmas and made it any early night with our flight back to Milan in the early a.m. 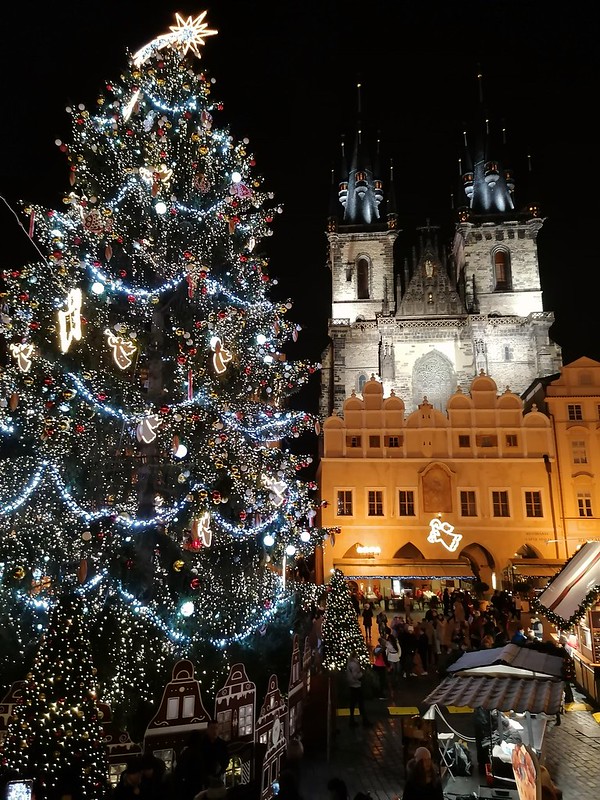 Prague... strangely, I never gave Prague much thought before I decided we would go to Prague. It’s one of those places that I’ve heard great things about and that is worth going. Plus I have a habit of wanting to see every countries capital. The shopping, the nightlife, the BEER, the food, the welcoming vibe of the city - I would make the same recommendation, it's worth going!
Courage. Confidence. Determination.
If You Never Tri, You'll Never Know!