Marveling at the beauty of where I came from, I was snapping some iPhone pics for this post, which was to be titled: Cornfields and Countryside; This is Where I Grew Up.
I was going to share some memories of life on our family’s farm. As I was taking photos, all of that changed… my hair stood on end and I realized I just captured paranormal activity. As with everything, I dialed my mom.

“What are you doing?”
“Oh working, this and that and more of this and more of that…” (I wasn’t even listening).
Interrupting, “I just took a picture of a GHOST!!”

Not surprised, she wanted to see the pictures ASAP. Hearing back from her, it might not have been an actual ghost, but we discussed and Googled, it’s more of a paranormal ball of energy...

The following pictures are in consecutive order, all taken within moments apart.

You can see Jake in the picture crouching down in front of the green orb. It was like they were checking each other out (I blew the pictures up on my phone and screen shotted them for a closer look).

Mom asked if I could see it in real life or just on the camera. The truth is, I don’t know. I had the camera in front of my face and it was definitely there because I was moving the phone around like, what on earth is on my screen and even flipped the phone over wondering if something was on the camera lense. Being that I was looking through the phone at the scene, I don’t recall if I looked at the real life scene and saw the orb. It was definitely moving around though on the screen and I feel confident that Jake saw it. In fact, I threw his ball that way again and he refused to retrieve it.

In the next pictures you can see Jake coming back towards me and the green orb is moving away (and more blown up pics).

In the final picture, the green orb is gone. Again, these pictures are all taken within seconds of each other (I wish I would have been snap snap snapping away though!!).

There’s no believing or not believing for me; it’s right here on my phone, captured in still life for eternity. It didn’t feel like a bad presence or anything to be afraid of even though it was spooky.
I didn’t feel scared just super creeped out. And according to internet descriptions, it’s harmless. 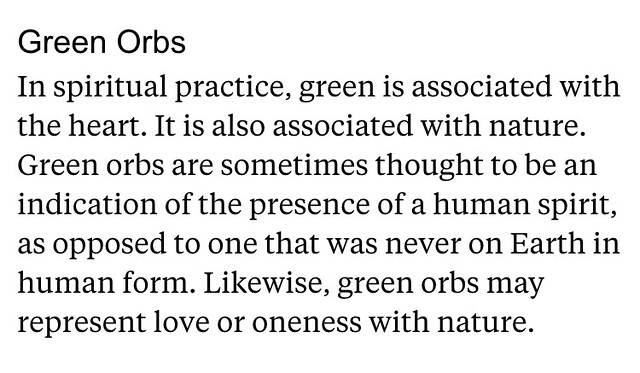 I’ve never seen anything like this in real life or really even considered the possibility (opportunity?) of seeing something like this. But it’s right here.