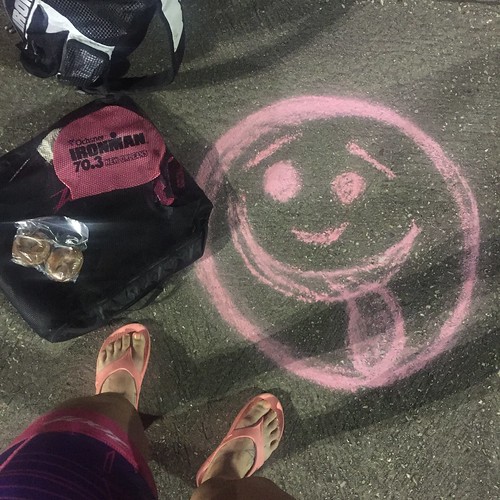 If you raced New Orleans 70.3 this weekend, you are a bad ass. 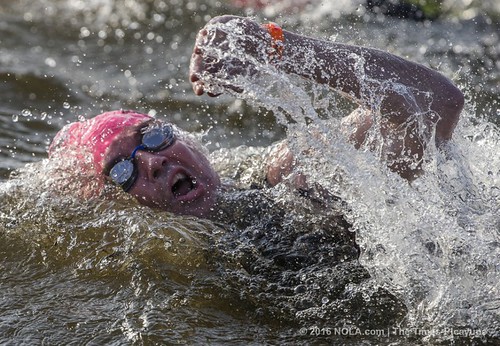 This is not a hard race course. But it was a harddddd day.
That was definitely the hardest 70.3 I've raced to date. Lots of people have asked, was that your hardest swim? And the answer is actually, no. The ocean is way tougher. And I really thought I was going to die in Cabo and South Africa. I knew I wouldn't die in Lake Pontchartrain, but I knew it was going to be rough. Sure enough, it was HARD!! Standing on the dock waiting for our turn to jump in, Dr. Kat appears smirking at me. "I'm freaking out Kat!!" The most lovely words escaped her mouth, "so am I." I instantly felt relieved. If Kat is nervous then this vomity feeling is totally normal! We jumped in together and she killed that 1.2 miles! I survived. 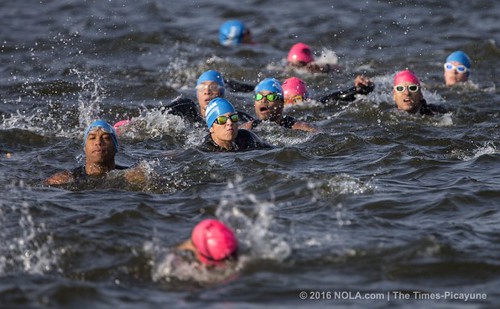 A protected marina, I've never seen this water so choppy. I imagine this is what it feels like to be in a washing machine. I would come up for a breath and a wave would slap me in the face and pull/push me back in. It was hard to site, hard to move forward, and just HARD.  It blows my mind that the winning pro swam that monster in 25 minutes. I bow to his triathlon awesomeness.
I've read that 79 people were pulled from the swim and many more didn't even take on the challenge. 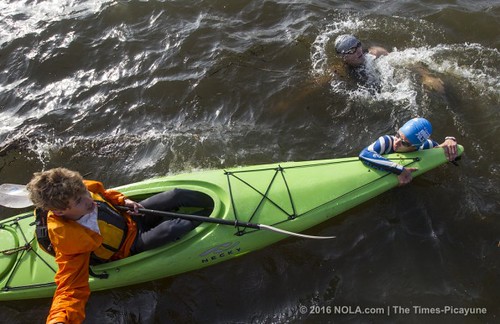 I swam 1.2 miles in 50 minutes ~ worst swim time to date. ^ that's not me.
First few pictures courtesy of The Times-Picayune. 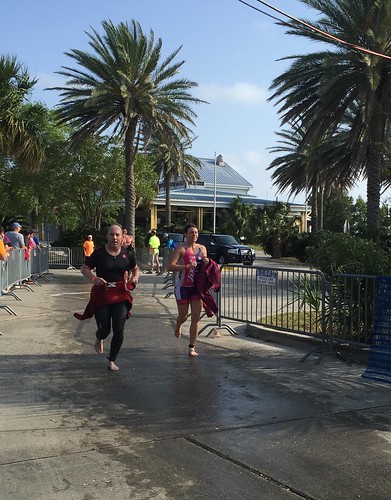 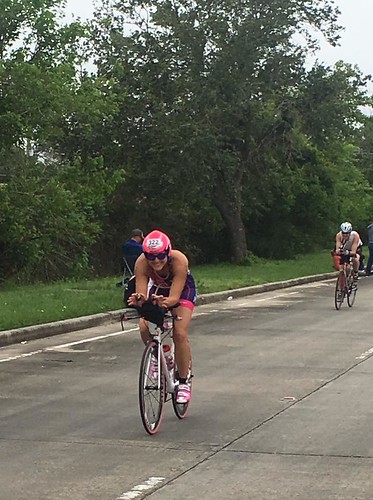 The bike was no better. We knew the 25mph+ winds were going to be in our face going out giving us a nice tailwind on the way back. Even though I was moving slow, I felt strong. I also felt like shit. A really bad bike fitting (when all I wanted was tweaked) left me super uncomfortable. My head, shoulders, and neck were aching almost immediately, my seat was entirely too far forward, and eventually my knees hurt and my legs fatiguing.
We never did get that amazing tailwind. Well, we got it for a small section, maybe 10 miles or so. But we actually ended up with some serious cross wind coming back. It beat the ferocious headwind, but it was still tough coming home. 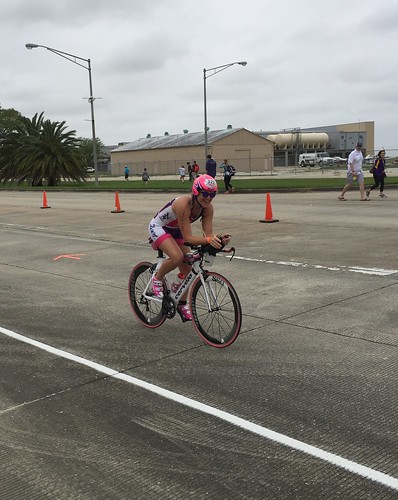 I managed to hold a 15mph going out and then a 20mph average coming in.
I honestly didn't push on the bike. I just biked. 3:13 was my official time with a 17.38 average.
Coming in off the bike I got a nice surprise, AMBER!! She made a last minute arrangement to get to NOLA and was there the rest of the day motivating me with Cameron. I couldn't have asked for a better sherpa team *hearts* 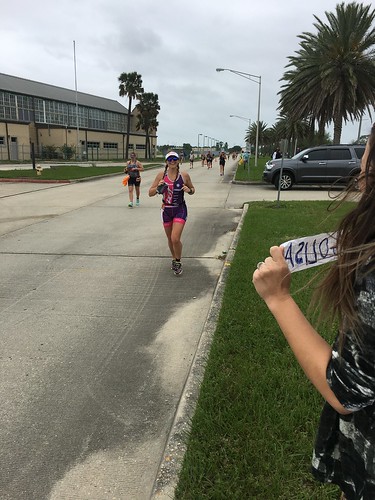 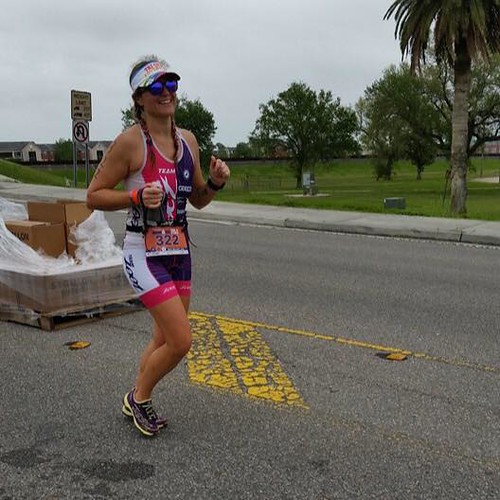 I can't even describe the run coming back though, it kind of felt like running through sand while pulling a giant tractor tire tied around my waist ~ so I guess I did just describe it. We were literally bent over running into the wind. And the wind was relentless. We didn't even get any breaks in it, just a constant headwind making us CRAZY.
My favorite part though (which also was due to being only 2 miles out) was coming across a friend Brandy. We ran the last 2 miles mostly together and the last 1 together. If it weren't for her, I probably would have walked and likely vomited during that last mile.

The finish line felt like red carpet rather than blue. So many cheers and friends calling my name, high fives, and cameras in my face. I felt like a super star coming through. And I was SO glad for this race to be over. 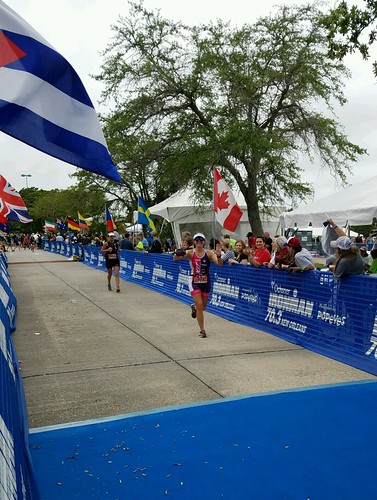 ^ that's Brandy behind me!! (she should have finished in beside me since she carried me the last mile but I think she wanted us to have our own special moments ;) thanks Brandy!!). 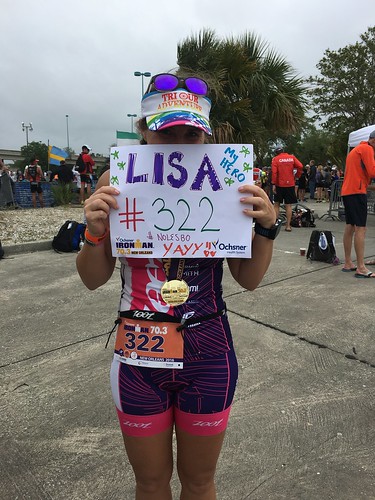 I was quickly greeted by Amber and Cameron and a slew of other bad ass New Orleans finishers, spectators, and friends. We waited with Abita and jambalaya while other friends and my momma finished. 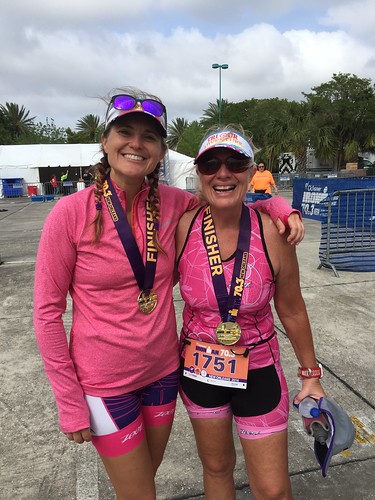 Fun facts that I don't know where else to include them:

~ New Orleans 70.3 also included friends from Ohio, David and Aneca and their group of friends, Jennie, Franny, Ray, Julie, Traci, and Brandi. The group rented a house for the weekend and mom and I stayed with. What a FUN group of gals (and David). We cooked. We drank. We pool'ed and we danced. Oh yeah, and we Tri'd. It was so great getting to meet and make new friends. David and Julie finished their races and the rest were relays, also finishing strong. I think our next group trip will be to St. Croix 2017. Holla!! I have to add that I'm quite impressed by the amount of alcohol these girls can put down...

~ Mom finished her third 70.3 SICK. She was so sick that race morning, I insisted she NOT race. The night before she had a fever and was up all night. I was so worried. When I saw her all smiles on the bike I was super relieved. She was complimented as being "the happiest athlete on the race course". Yep, that's my momma *hearts* 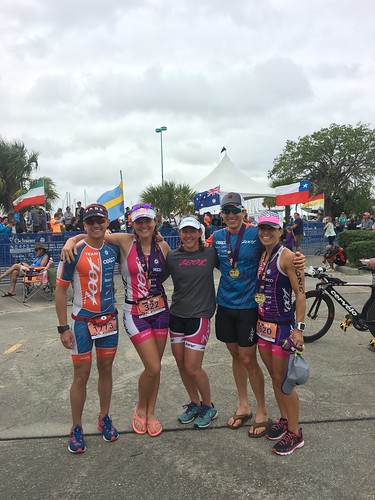 ~ Team TOA, Team Zoot, Ticking Tri Bombs, SBRMimosa, BnG Tri Club, and Tri-Dat were just a few of the clubs of which friends were on the course. I love love love seeing familiar faces out there and cheering for my people.

~ As an AWA athlete I got a special PINK swim cap but more scarily, they put me on a special bike rack (insert eyes wide scared face). The reason for the intimidation, everyone else on the rack is super fast!! I'm an AWA mostly because I do so many races (it's a point system). Others gain points by winning and being fast. I knew that I'd return from the swim and everyone's bikes would be long gone. To my surprise, they weren't! Only about half of them. Phew!! Felt relieved and kinda bad ass...

~ A whole slew of more photos 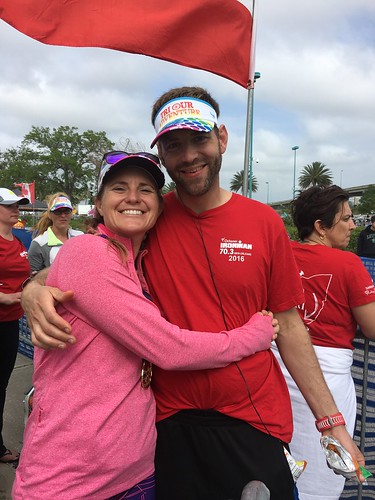 ~ I'm super extra proud of David H. In high school 20 some odd years ago we never imagined we'd be doing this and especially together. I love this guy.
Courage. Confidence. Determination.
If You Never Tri, You'll Never Know!