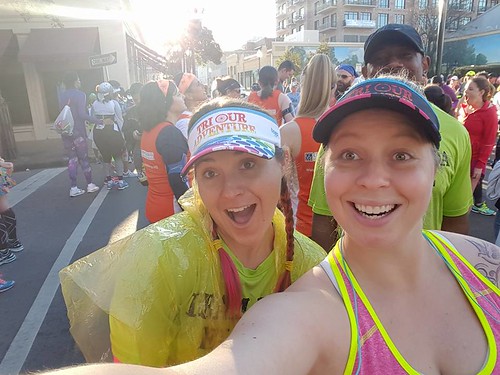 It’s really hard not to sign up for a marathon when it’s only $50. And that’s what happened at the finish line of Rock n’ Roll New Orleans in 2015.

Returning from Europe in October and knowing I’d be settled in Gulfport for a few months, if felt like a great time and opportunity to kick off Tri Our Adventure to a Half or Full Marathon + I don’t have to train alone!! There are a number of perks to being a Coach.

I sent out emails, I posted on Facebook, I sucked in previous runners, I asked customers at the shop, I talked to everyone about my program and started the journey with 57 motivated individuals. I wanted a really big group so we could really lean on one another and have lots of different paces and abilities. It worked!

I asked Elite Screen Printing (one of my sponsors) to sponsor the Team and thus, TEAM TOA ELITE was born.

We started in October on a Monday. Our routine (my program) is simple, speed work on Monday’s, individual tempo runs on Wednesday’s, and group long runs on Saturday’s. The first run together is always so much fun. Most of the athletes are nervous, quiet <-- this doesn’t last long, and they don’t know what to expect.

I always go over proper form, breathing, and a few comfort techniques. But guess what? I didn’t get to be there!! Remember the Jake/American Airlines ordeal in Kansas? I was stuck in Kansas for our first group run together!! Not the best first impression. Luckily, Amanda took my reigns and led the group (with the help of Michael and Kerry and Sarah ~ previous TOA runners) through their first Monday night of speed work.

I made it back to town in time for our Saturday group run. Still a group of nervous individuals.

The next 18 weeks were similar: Monday night speed work and Saturday group long runs. Their strength and friendships became stronger and stronger each week.

I could probably write an entire chapter of our weekly fun, but I’ll highlight a few of our memories:

~Longest Indian run line ever!? That night was SO motivating. That’s the night Tracy sprained her ankle too. DOH!

~The wind that day on Ocean Springs bridge! That’s the day Derick ripped his muscle from his body. WHAT!?!?

~Poop, body parts, snot, and sex were always of conversation. And how about those little miniature quito things B brought!? YUM!

~Speaking of snot, I don’t know who produced more, Marie or me ?!

~And how about Sherrie and her dainty tissues!?

~Or Jennie and her snot RAG!?

~Brunch at Hook (potty mouth!!) and the Wilson's with the rescue ;)

~Battleship 12k, First Light Half Marathon, and a few other in between races

~New PRs and goals reached by so many!

~Breakfast in the Bay… And we all finally got to meet Glenn’s wife ;) 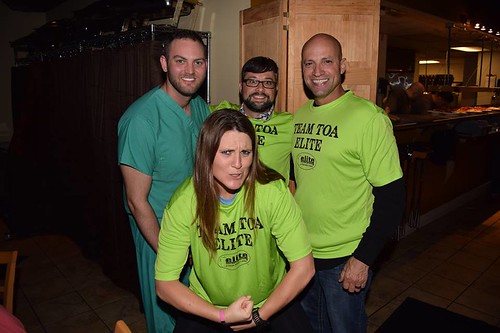 ~Glenn, Chad, Tim, and Brandon always blazing right by us

~All of our guest/friend runners joining us!!

~Sara being able to join us for a few group runs over from Slidell!!

~Paul biking beside us on the trace!!

~Locked bathrooms at Point Cadet, no problem!! Poop in the bushes!

We covered pavement from Slidell, Diamondhead, Pass Christian, Gulfport, Biloxi, to Ocean Springs. We added a few races here and there. We shared stories, advice, and nutrition. This group of athletes was super supportive and motivating to one another and ultimately, became FRIENDS!

And you know what!? Honestly, nothing too crazy happened!! We had a few injuries and a lot of complaints, a few meltdowns, too much doubt at times… but we all still made it. There were times that I was emotionally drained and thought, I can’t do this anymore. And then seeing athletes hit their goals and set new mileage achievements brought me back. One athlete asked, “How do you keep up with everyone and their issues and questions and needs?” And I thought, I have no idea!! It’s exhausting!! And, but… SO REWARDING at the end. Especially when the Team brought me to tears at our Team dinner with their thoughtfulness. I was quickly reminded what a difference we are making in each others lives and how much I love being a part of their journey. 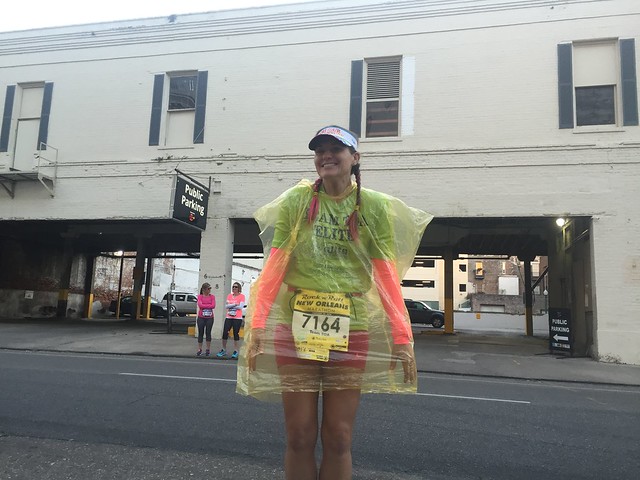 On to race day: race morning anxiety was low. I found Sam first thing in the morning with no intent or plan; we were on the same bus! Destined to run together for our third year in a row. It was chilly. A sweet random girl gave me her trash bag raincoat for me to curl up in. We arrived in our corral very early. It’s okay. Susan was there too. In fact, we caught a glimpse of almost everyone at some point during the morning. Hugs and good lucks and high fives for all… 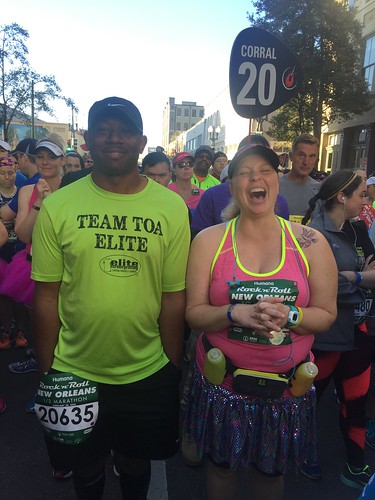 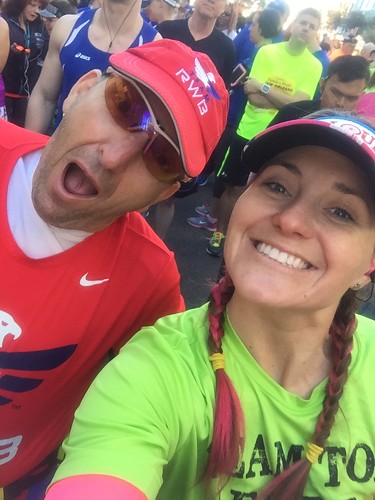 I decided to run with Marie and Sherrie and Missy and Annette. The 5 of us pretty much maintained the same pace during training and I knew it’d be a fun day with them. Sam also joined us. 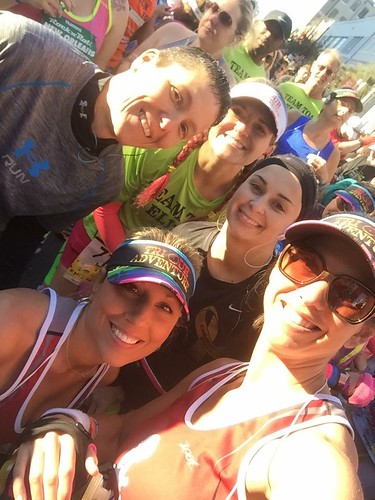 The first half was a breeze but I could tell maybe we were a bit faster than we should have been. Everyone seemed to be doing great on nutrition and hydration despite battling some aches and pains. Around mile 16 they slowed down a bit and sometimes it hurts the body more to purposely run slower so Sam and I continued our own pace and got a bit ahead. I felt bad pulling away, but Marie and Sherrie had each other and Missy and Annette. I was the 5th wheel anyway ;) So Sam and I pushed on.

I can’t even lie, it got hard. Mile 18-20 are always screaming at me in a marathon and this time even mile 21 and 22 were loud. I think the final two miles were just in angst to get there! My back tightened up pretty good (normal) and my quads were super sore (and stayed sore for about 3 more days). But it was a satisfactory finish. I stayed on point with nutrition with eGel and Honey Stinger Waffles. I also sipped the course Gatorade once or twice and drank plenty of water. It was hot. A lot hotter than ANY of our training runs. The whole Team was covered in salt stains. There was no way to prepare, however, for the hotter weather. Like I said, we all survived so we all did something right! 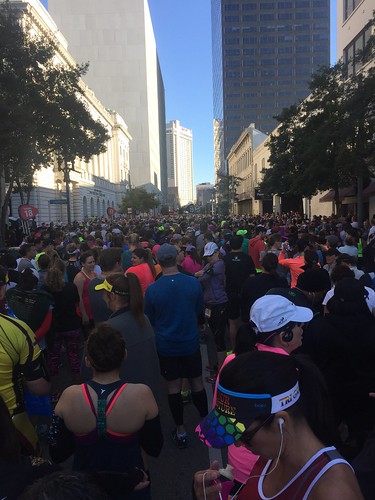 I really like RnR New Orleans race course. It’s mostly flat with just a couple little hills near the end. There are a few out and backs so you get to see and cheer for friends. Once again, I saw almost everyone on the team out there. You also get a taste of everything NOLA on the course, downtown, oak trees, city park, levee, neighborhoods, everything trendy and weird and old and jazzy! My favorite part is running through the French Quarter. It’s not often you can just run down the middle of the street in the middle of New Orleans on a Saturday morning. Tourist are just waking, sipping their coffee, and looking at us like we’re nuts ~ all 30,000 of us! And maybe we are ;)
Folks are crowding around Café du Monde for beignets, the street vendors are setting up, and Friday night drunks are wobbling about… It’s totally New Orleans. Very cool place to get to run.

I wasn’t overly impressed with the bands this year though. In the past, there has been a band set up about every mile on the entire course. Unless I was just in my own little world, it seemed like the bands were few and far between. As were the aid stations! Not that there were few, they were just spaced apart at odd distances. I’d like to see the course a little more consistent with aid. Still great though and I’m glad Glukos came on board with their product; it’s a good product (and available at your local Run-N-Tri Company!!). I’m still an advocate of carrying your own nutrition and hydration; you don’t have to use what’s on the course, use what works for your body! 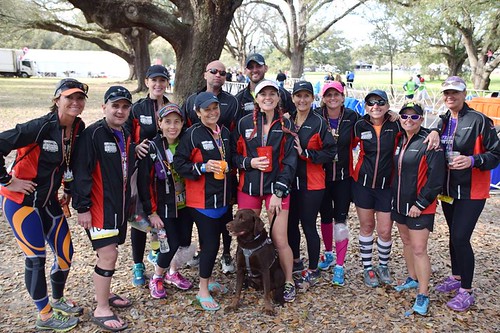 Always a great finish line and after party at city park. Chocolate milk and beers and snacks, music… and so many friends!! I also love the finishers jackets ~ a great addition these past two years and I’m certain a nice incentive to new marathon finishers ;) Our finish line was met with TOA Elite half finishers, BE Fit friends, Cycology friends, previous TOA athletes, and local coast friends…it was awesome. Jillian brought cocktails and snacks for everyone and my sweet Jake was even there waiting for me. It was a really gratifying and rewarding finish. 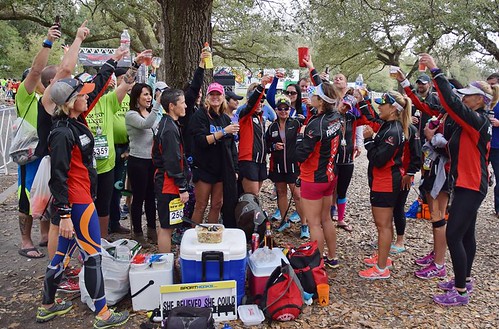 Speaking of finish… Here’s our numbers:

2 finished the half marathon (back troubles and hip)

2 losses to knee injuries (one very early on)

1 loss to wrist surgery (not related to running)

3 never showed up for training

2 had other goals but just wanted the group training

That’s a 75% finish rate for the entire program (and actually 77% if you count the two that didn’t intend on racing NOLA). I gained two new triathletes and two will continue on towards a marathon training program. I feel like the last 18 weeks has met some really beneficial business, personal, and social needs. VERY rewarding. 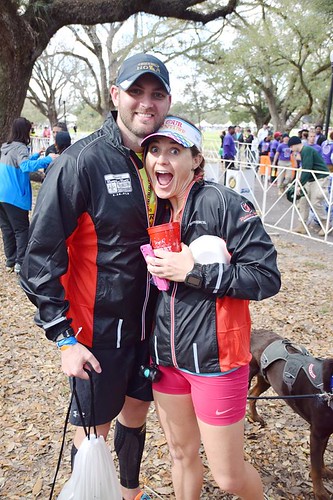 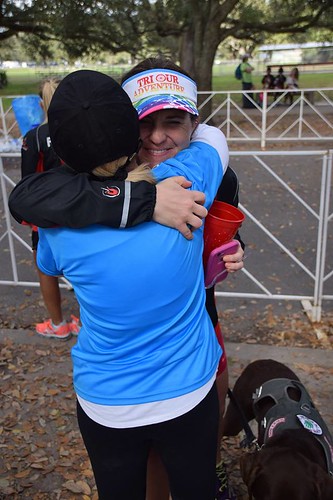 The friendships we built with Team TOA Elite are priceless. It’s so much more than just having someone to run with or suffer with… We met people maybe we wouldn’t have otherwise and bond with people who also, maybe we wouldn’t otherwise. We learned so much about each other and ourselves. It’s been a commitment, a challenge, and a life changing experience. Big thanks to my sponsor, Elite Screen Printing. Thanks to Core Chiro for taking care of all our athletes. Thanks to Run-N-Tri for carrying the best run gear for our athletes and mostly, I can’t thank my Team enough! You all are so great and I appreciate you to the depths of my soul. I’m so lucky to know such great people. I'm SO very proud of every single one of you. It melts my heart and I can't say it enough, thank you for letting me be a part of your marathon journey. I hope I made some sort of impact in your world because you each in your own ways certainly made an impact on mine. 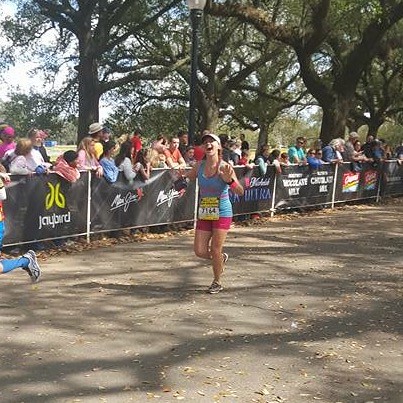