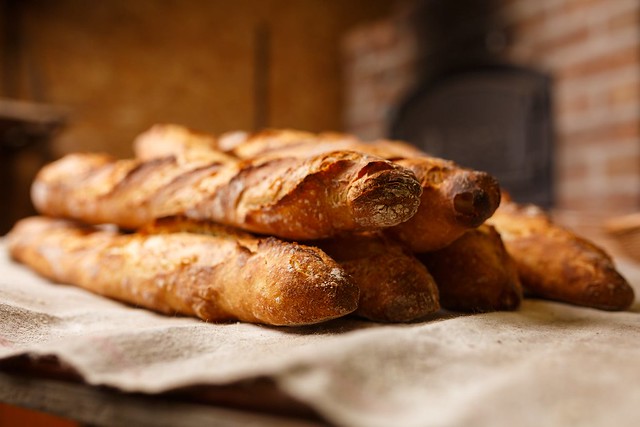 Italy is just as famous for their breads as they are their pasta and pizza. Once again, every region (down to individual families) have their specialty. Here are some tops breads you MUST try!:

Cecìna – originating along the Tuscan coast, this pizza-like flatbread is made from a batter consisting of water, olive oil, and chickpea flour. Sea salt, black pepper, and rosemary are often used to season each thin, crisp pancake. Cecina and Farinata are virtually identical.

Ciabatta – wheat flour and yeast comprise the ingredients used to make this Italian white bread originally produced in Liguria. Its shape should be long, broad and flat, with a slight collapse in the center. Ciabatta is soft, light and porous with a crisp crust. There are regional varieties of Ciabatta throughout Italy.

Ciambella - crusty on the outside, soft on the inside. La Ciambella is a very typical style of bread that you can find in bakeries in both Puglia and Basilicata.

Colomba Pasquale – natural yeast, butter, flour, sugar, and eggs are used to produce this bread, traditionally baked on Easter. It is shaped like a dove and coated with almonds and course sugar before baking.

Coppia Ferrarese IGP – early forms of Coppia Ferrarese date back as far as 1287, when bakers were encouraged to produce bread in the shape of scrolls known as orleti. Each 3- to 9-ounce loaf of Coppia Ferrarese is shaped with two dough ribbons knotted together. Each end is twisted into a fan shape with four crostini, or spokes. Flour, lard, olive oil, and malt are used in the production of Coppia Ferrarese. Some 330 bakeries in the province of Ferrara produce this golden-crusted, aromatic bread.

Cornetto - these are similar to French croissants, but sweeter and often filled with a sweet cream or jam, they are a typical Italian breakfast.

Farinata – native to Liguria, this pizza-like flatbread is made from a batter consisting of water, olive oil, and chickpea flour. Sea salt, black pepper, and rosemary are often used to season each thin, crisp pancake. Farinata and Cecina are virtually identical.

Farro della Garfagnana IGP – historically, Tuscany had always cultivated the ancient grain, spelt. Although it ceased cultivation in the rest of Tuscany, Garfagnana continues to have a strong market for the grain. Rules maintain that no synthetic chemicals or other pesticides may be used in producing or storing spelt. Stalks of Farro della Garfagnana are generally floury after husking. They are streaky white in color.

Focaccia – this relative of pizza is ovenbaked and flat. Focaccia is seasoned with Italian olive oil and can be topped with herbs, meats, cheese, or vegetables. Rosemary, sage, and sea salt are common seasonings for this Italian treasure.

Fragguno – baked on Good Friday in Calabria and eaten on Easter Sunday. Fragguno is stuffed with foods such as salami, cheese, and eggs.

Friselle - a dried bread, which vary in thickness and size, depending on what region you are in. Generally eaten with fresh tomatoes, extra virgin olive oil and thyme. I first had them in Basilicata where they would dampen them with water before dressing them, I’ve also had them in Naples topped with seafood.

Grissini – native to Turin and Piedmont, these breadsticks originated in the 17th century. The shape is irregular, twisty, and thin like a pencil. It is common to find grissini served with butter and wrapped in prosciutto.

Pandoro – one of the two Italian sweet yeast breads served mainly on Christmas day. This frustum-shaped bread with an 8-pointed star is usually coated in vanilla icing to represent snow. In ancient times, breads like Pandoro would be reserved for royalty, but everyone may enjoy them today. Domenico Melegatti, resident of Verona, attained a patent for producing Pandoro in 1894. 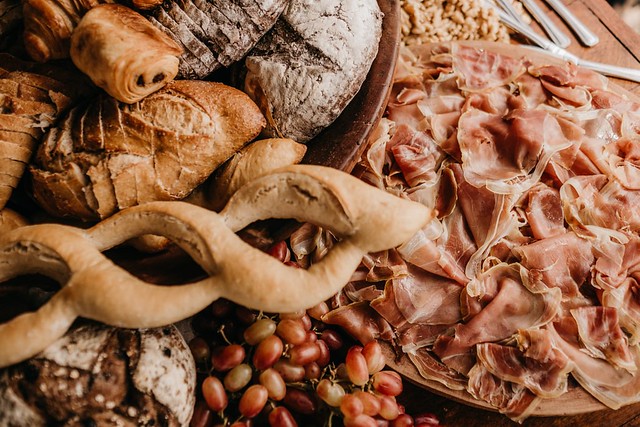 Pane Carasau – this half-meter wide Sardinian bread is thin and crisp. Pane Carasau is a twice baked flat bread that may last up to a year if eaten dry. Note: Pane Carasau is also known as Carta di Musica (sheet music) because of its extremely thin, paper-like quality.

Pane di Altamura DOP – originally, the dough for this bread would be home-made and then publically baked by a local professional. The baker would stamp family initials into the dough so it would come back to the appropriate household. The finished product is very crisp and aromatic. Pane di Altamura is known for its long shelf life.

Panettone – native to Milan, Panettone is one of the two Italian sweet yeast breads served mainly on Christmas day. Acidic dough used to make Panettone is cured before being shaped into a cupola, which extends from a cylindrical base. Raisins, candied orange, citron, and lemon zest are added to the bread for flavoring. Regional variations for Panettone include serving with Crema di Mascarpone, or chocolate.

Penia – an Easter bread made primarily in rural parts of Italy. Along with the common sugar, butter and eggs, anise seeds and lemon are added to Penia for a unique flavor.

Piadina – flour, lard, salt, and water make up the typical ingredients of this flatbread from the Romagna region. Piadinerie sell these fresh breads stuffed with items such as cheese, salumi, vegetables, or jams. Regional variation accounts for differences in thickness. Piadina are comparable to a Mexican tortilla.

Taralli – this sweet or savory ring-shaped snack is common throughout Southern Italy. Taralli can be sugar-glazed or flavored with poppy seed, fennel, salt, pepper, sesame, onion, or garlic. The rings gain a unique texture due to being boiled before baked. Note: Taralli are often dunked in wine.
Courage. Confidence. Determination.
If You Never Tri, You'll Never Know!