He's not Crazy but he makes ME Crazy!!

Now that you have an update on my graham cracker, now it's time for Deere John. 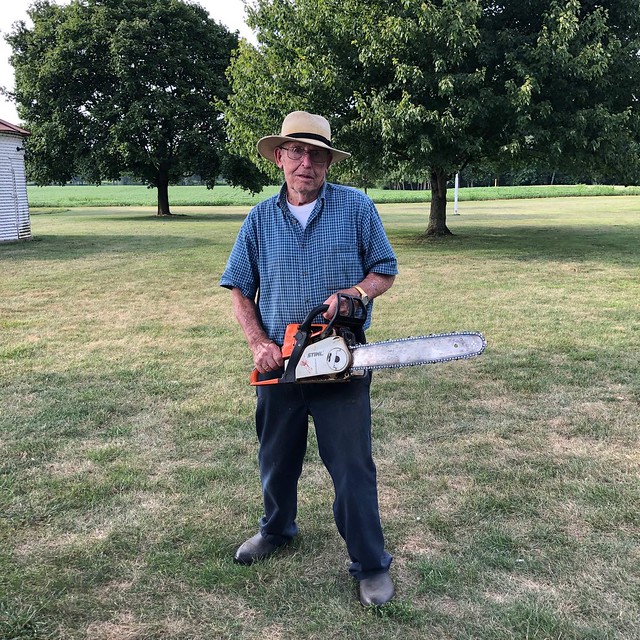 Where do I begin? For starters, my grandfather is a twin. If he and his brother Joe were born today, they'd be on the spectrum for sure. (autism). They (and their older brother Paul) are geniuses but they are... hmmm, a word... eccentric. They have spent their lives working, building, and tinkering. They both had jobs for the money and then worked for fun - the farm, building floats, fiddling with this and that. They work. They tinker. And their minds... I just don't even know how to describe them. They are always thinking and figuring...
i.e. You know those triangle peg games at Cracker Barrel? My grandfather once, first made one, then figured out and wrote down every single way you can win it. He used to spend hours with crossword puzzles, Sudoko, and any wooden puzzle games you could hand him to figure out.
His twin brother once went to San Fransisco to "study" the cable cars. And then built his own - like a real life one that he drove in parades and people rode on. Amazing.

My grandpa can figure out how to build just about anything but can't boil a pot of water. He's had to learn a lot since grandma has lost some of her sense - like how to use the microwave. Needless to say, he is NOT a caretaker. He loves to watch football, Family Feud, and disappear to the shop or barn. He also loves True Value, Kroger, and the bank (he worked at the bank his entire life) so any chance/excuse he gets to go there, he does.

There's a few things that drive me absolutely mad with grandpa. He has NO idea how to treat an animal. He's never had one, they've never liked him, and he's just clueless. "Give me toy. Give me toy. Give me toy." is what we hear All. Day. Long. while he chases Jake around the house. At least Jake doesn't growl at him anymore. He purposely shakes tools and other scary objects at him to get him worked up. He yells "stupid dog" and "shut up". Of course, he's "joking" and means no harm but as you can imagine, it INFURIATES me. I breathe and remind myself, he's 9 years old. Oops, I mean 90. But for real, 9... no 8. If grandma is 3-4, he is 8-9.

Despite THAT, he actually still has his wits. He honestly tries to do too much sometimes but he's doing okay. He's very independent, still drives, and besides refusing to wear his hearing aids, can hold a conversation and has all his memories. He also jokes. A lot. Too much. Add that to my 'makes me crazy list'. He makes jokes that aren't funny. Mostly we ignore him, but when they include my dog and getting hit by cars, I lose my cool. I've scolded him a few times.

He likes to joke with grandma too and pick on her. I think their relationship has always been like that but grandma doesn't respond like she used to. Sometimes I think she's screaming on the inside FUCK OFF YOU IMBECILE but nothing comes out. And/but sometimes she giggles or rolls her eyes. When he boops her on the nose though, I too scream on the inside but remind myself again, he's 9. Despite, the man worships the ground she walks on; always has. And at the end of everyday you will find them snuggled on the couch holding hands and not a morning passes without a kiss and an "I love you." Truly unconditional love. 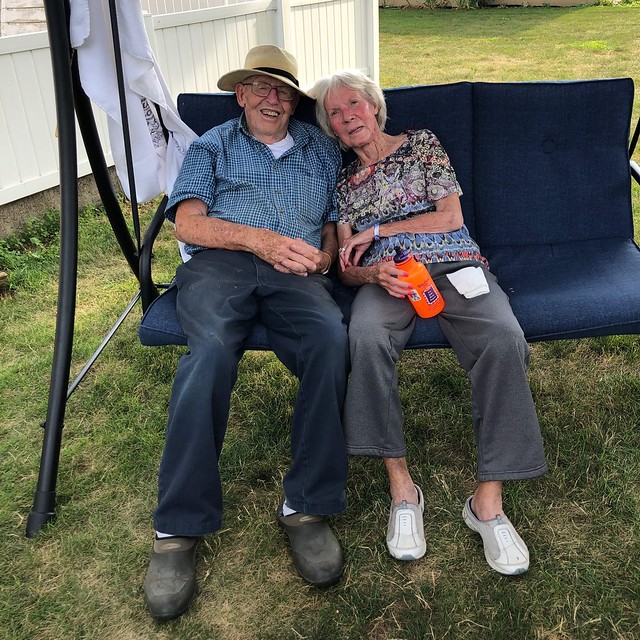 He really tries to help and thinks he's doing a good job.
He attempts to help grandma with various tasks and definitely still tries to take care of the house.
He makes (easy) meals (sometimes) and ensures pills are taken and patches are on. I'm not quite sure he's fully onboard with what's happening to grandma and often remarks "I just can't believe it."
He expects a bit too much out of her and I can see/feel/hear his frustration - something we've NEVER seen from grandpa. I've caught him being mean a few times but not out of intentional cruelty but just out of frustration, confusion, and not understanding her conditions/the situation.
The truth is he NEEDS help but would never accept that - which is another 'makes me crazy'. Throwing clothes at grandma is not helping her although he will tell you he "dressed her this morning".

Sometimes I wonder if he can't retain new information. Like, his habits and the norm are happening. He doesn't miss a beat. But if you add anything new or expect him to remember something new - forget about it. My aunt thinks he just can't hear us. But I think he hears, he either just doesn't remember or ignores us. For example: I might say on Monday night, okay grandpa, the nurse will be here tomorrow at 1pm. I won't be here. You need to do this. When I return on Tuesday, he didn't do what I asked, was surprised that the nurse was there, and wondered where I was. I have found that leaving a note on the counter (every single) morning helps. I also feel like this is just being (almost) 90 years old. Who knows for sure. Do 9 year olds remember things?

Overall, he's in good health. And pretty spry for 90. While he frustrates us, we still love him and remember that he needs a bit of extra special attention sometimes too. If I could get him to stop (obsessively) watching 20 year old ball games and Family Feud the house would be happier, HAHA!!

In all, it boils down to this: would you leave your 8 year old home alone with your 3 year old?...