We Paid Rent for Dinner

Okay, I'm mostly kidding...but not entirely.
By the time we realized what was happening we were in too deep.
So what had happened was...

Luca has been gone for the past few weeks training down south. Finally able to come home for a weekend we decided on a stay-cation in Viareggio (a little beach town just south of us).
I wanted a romantic dinner out and found the perfect spot, "Il Piccolo Principe". Not only was this one of my favorite childhood books but it was my welcome to Italy gift (in Italian) from Luca. Perfect, right?! It's also located at the top of a hotel and people raved about the views. 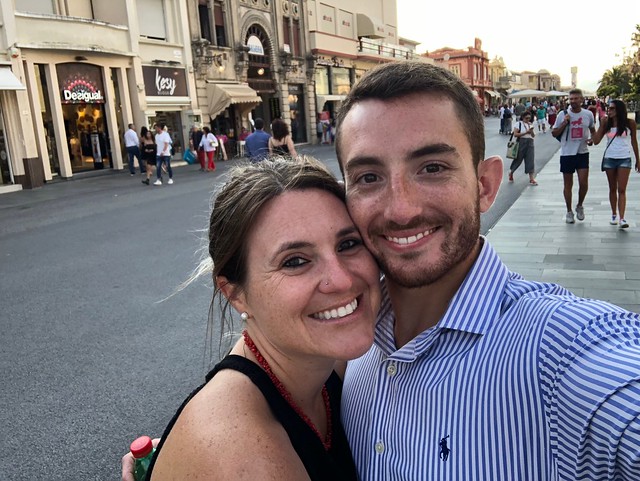 So, reading reviews, I saw one that said about 120euro. I assumed this was total. And I added some considering a nice bottle of wine. We (luckily) got pretty and walked to the Grand Hotel Principe Di Piemonte. Upon arrival we were welcomed into this SUPER swanky slice of heaven by guys and gals in black tuxedos. Uh oh... we were quickly sat at the best table in the place and presented a Welcome Letter from the Chef on a blue velvet pillow. Big uh oh... 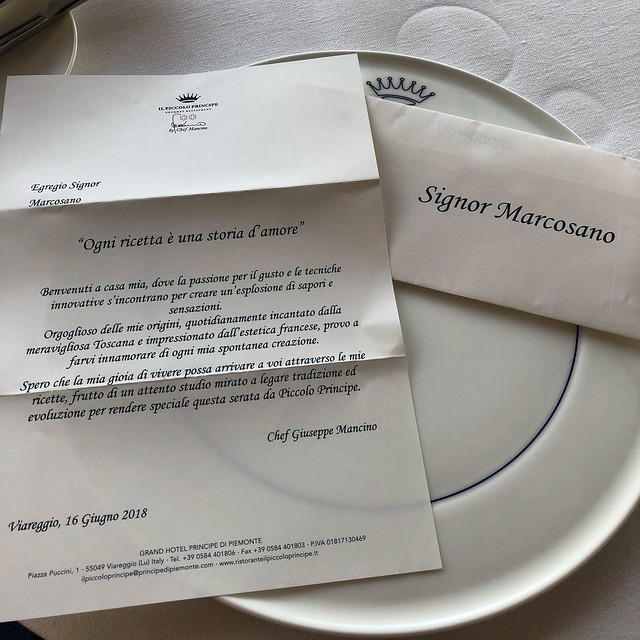 Before we even knew it, water, wine order, and pre-meal snacks were hitting the table. Seriously, it all happened so fast we didn't even have time to back out. Menu's came shortly after with an explanation from the maître d' and the realization, we are OUT of our league. GULP...

Of course we don't want the staff to see the cheap in our eyes so we're speaking through smiles and decide, you know what, we're in it now... let's just do it.

We peeked into the menu and there were a few a la carte items on the menu ranging from 50 to 100 euro each and then there were course menu's where the chef would strategical send out unique dishes from appetizers to dessert. We opted for the cheaper of the course menu's which was chef's choice. Basically we don't know what's coming, the chef gets to surprise us.
And... 140 euro PER PERSON. That was the cheap one my friends!
Looking back, I wish one of us would have tried one of the other menus.

Anyway, so it's WAY too late to back out now. We made a very pricey mistake but we're going to see it through! The staff was great - keeping us well informed, watered, and wined. They were speaking partially English, partially Italian which was sweet and silly. I say "staff" btw because we had an entourage of care.

Time to eat: each dish arrived and was carefully described ... as well as carefully selected, prepared, and presented. Let me just show you: 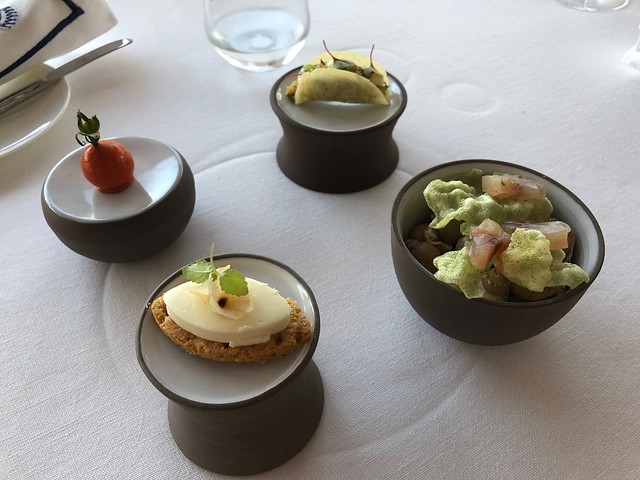 The first starter arrived like this - miniature - the taco was very minty and leafy. On the left is a pretend tomato that's actually a ball of smoked cheese. Front is a cookie like crust with creamed cheese and very curios disc on top. To the right is a pistachio cracker w/raw fish. Close-up: 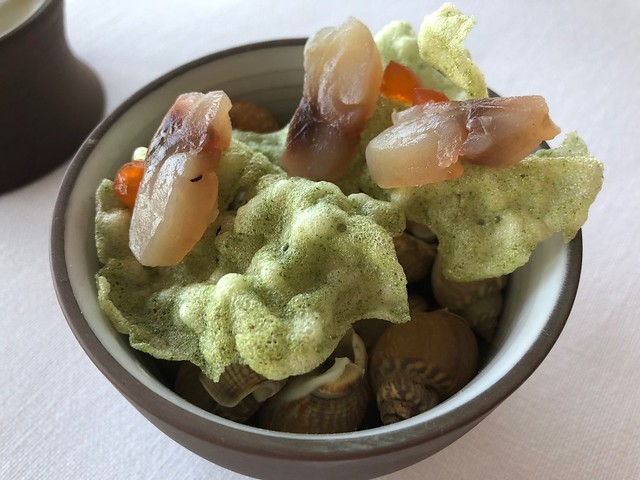 The next starter was even more unique... creamed green apple (foamed) w/Japanese basil. And there were raw shrimps down in there. I didn't love the apple/basil flavor but Luca enjoyed it. I forgot the bread too. Seriously, FRESH bread. Like I'm certain it just finished baking fresh bread. Also some focaccia w/seeds and nuts which was awesome. The also served a French seasoned butter. 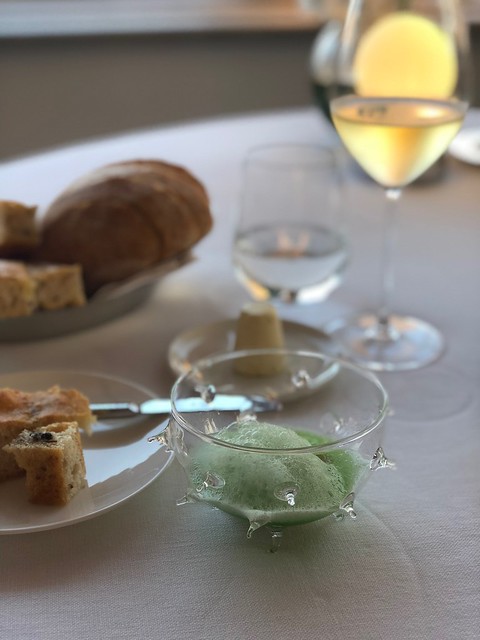 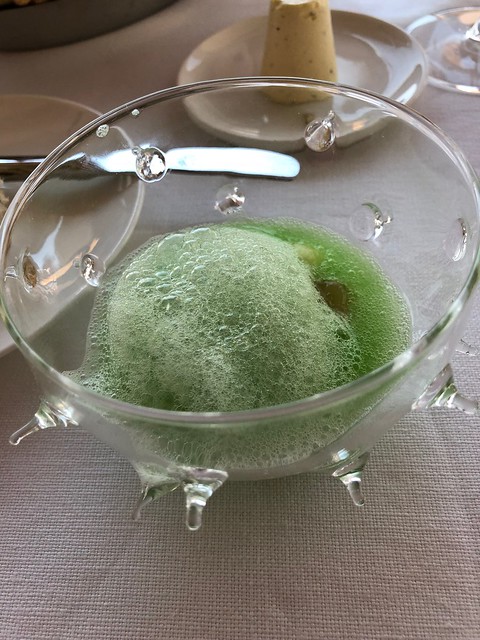 Luca decided that this dish was inspired by the bowls - presentation, right? Kind of an alien or deep sea feel. I say deep sea since it was seafood. Luca says alien since it was green. Either way, not my favorite. 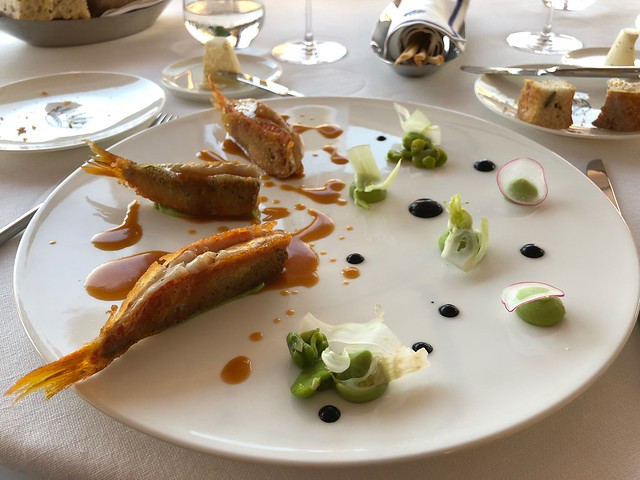 The first main course was a crusted fish w/creamed peas and it was awesome!! This was by far my favorite! The flavor and crunch/soft combo was perfect. It was also (surprisingly) quite filling! In fact, I shared one of my little fishies w/Luca. 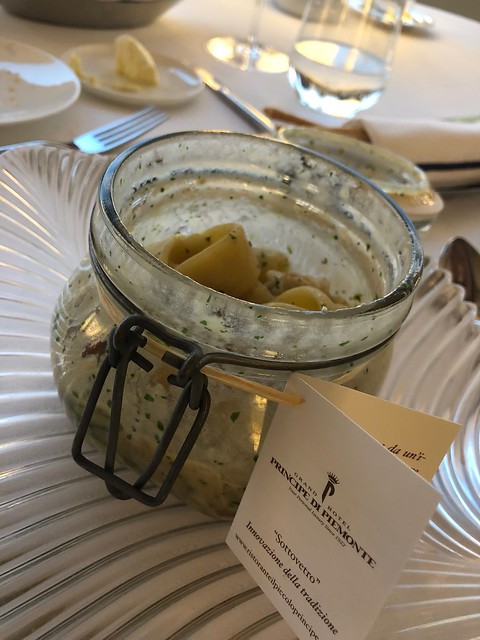 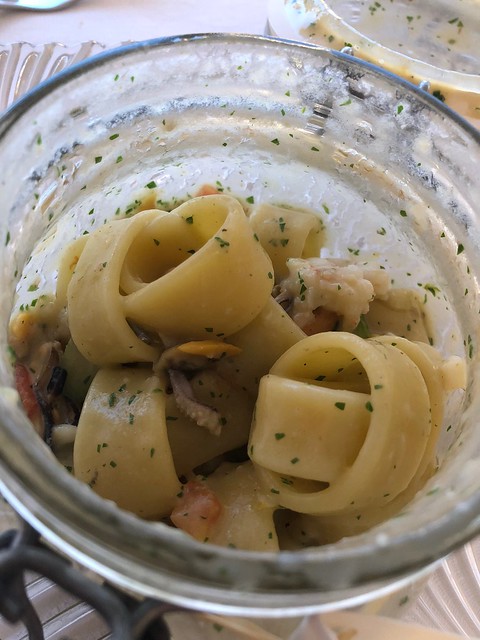 And the main course, pasta Sottovetro - which means under the glass. So basically, the raw ingredients are all put inside the glass jar and cooked together. It's also called vase cooking. Apparently the flavors are able to really work into each other. Seafood, veggies, and huge pasta rings. I didn't love it. Luca did. A lot! Again, presentation and interesting (unique) cooking. I wouldn't be afraid to try it myself - the vase cooking. 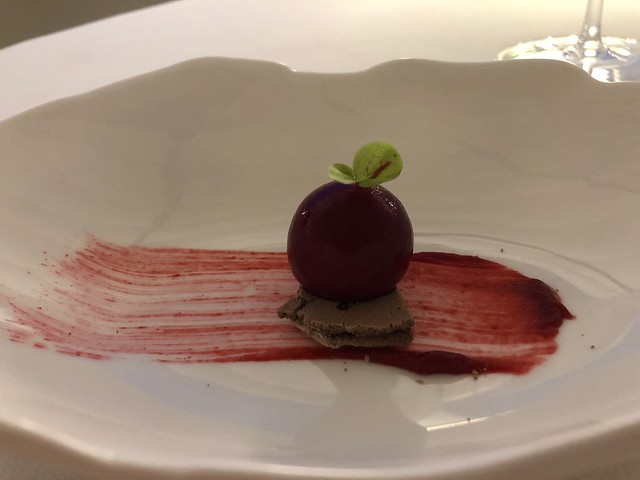 This was a sort of chocolate covered cherry but all made, not an actual cherry. Biting into it, a juicy crunchy explosion of chocolate and fresh cherry. 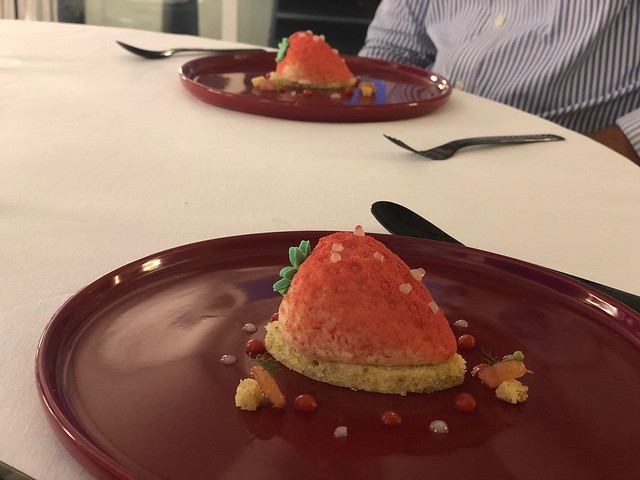 This was the BEST! A cookie crust w/this strawberry shaped deliciousness that was made out of some kind of cream/cake/we don't even know! It was YUMMY!! Kind of the consistency of NY cheesecake but it was hollow and fresh strawberry puree surprised us in the middle. The drops around the outside were a little sour and just set the whole sweetness off. Or ON rather. 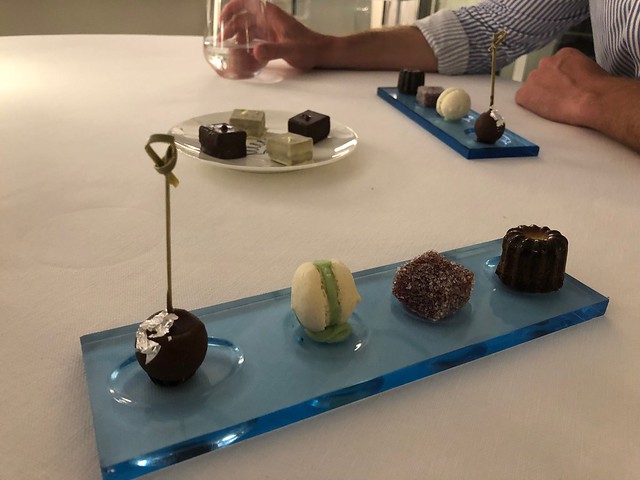 The night finished w/an assortment of chocolates and candies. Kinda went overboard with this one. Dark, pistachio, coconut, mint macaroon, jelly, and cake like chocolate. We were going to have caffe but it was 12 euros. You know how much a caffe is on the street? 1 euro. ONE! So we passed, LOL!

Overall, this place was WAY too expensive. A nice place and great food w/impeccable service but seriously - WAY too expensive. Had we known ahead of time, we would have NEVER eaten here. Really truly. (btw, the prices or $$$$$ of the place weren't listed anywhere).

If you're in Viareggio and have the money to spend, go ahead and make your reservations. If you're financially normal like us, it's over your head!
Courage. Confidence. Determination.
If You Never Tri, You'll Never Know!