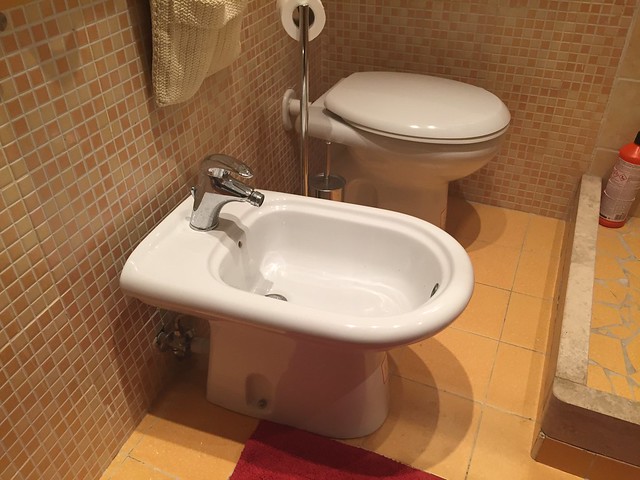 I’ve traveled around Europe on several separate occasions so I’ve been quite aware of the existence of a bidet. I was actually educated (warned) back in 1998 when I spent the better part of December exploring the continent solo. However, I never actually came across one (explained later). In fact, the only “strange toilet” occasions were once in France, where it was just a hole in the ground with two non-slip pads to stand on; I was 18, not athletic, how the heck was I going to squat hover over that thing!? The second when I had to pay to get in and OUT of the public toilet in Belgium; note here that I did NOT have the extra change to get out :O And the third when I couldn’t find the flusher for so many minutes before realizing, (searching desperately, it was a BIG potty!) it was a pull chain from above, PHEW!, in Italy. I guess the burn-out latrines in Iraq have a place in this list as well, if you don't know, you don't want to know! Think buckets and flames. Shit flames.

Okay, anyway...
but actually, a bidet isn’t a toilet. It’s a plumbing fixture… it’s in the bathroom… and it’s usually next to the toilet… often mistaken for a very confusing water fountain or a toilet. But it’s not for the potttttty…

No, no, it’s actually a SINK for you to wash up after the potty! Or... ahem... sex. Or when you’re just feeling less than fresh. Ladiessss, you know! They are super common IN HOMES and are actually a mandatory installation but not in public bathrooms (which is why I never came across one in 98). But now, LIVING HERE and visiting the homes of friends, there it is. Your own little magical butt shower.

I giggled when I first arrived. Luca, hee hee hee, we have a bidet hee hee hee!
Of course we do! He’s never known any different. Why are bidet's so darn funny to us Americans!?

But then it kind of became this weird almost creepy fixture that I “stepped” over to get to the toilet. Kind of like Macaulay Culkin in Home Alone with the basement furnace. I see you seeing me Mr. Bidet! and I’m not scared of you! Ahhhhh! Tripping (falling) out of the bathroom (and yeah, the bidet is a Mr, I don’t know why. When they’re sitting next to each other the toilet becomes the Mrs. and the bidet is the Mr.).

Mostly timid and partially embarrassed I finally approached Luca, okay, I give in, how the heck do I use this thing!? I was going to Google it but instead (mostly because my wifi sucks in the bathroom) cracked up laughing while Luca demonstrated. Don’t be gross, he had his clothes on and showed me figuratively not actually. I was all, frontwards or backwards!? Guess what? Either way! However you want! However works! Aha!! I get it!! Guess what else, I finally tried it. I won't go in to detail, but it's AmAzInG (imagine my ridiculous "it's AmAzInG" voice here). How do we not have these in America!? I feel clean and fresh and warshed! And yes, I still crack up with every single use HA HA HA HA HA!!