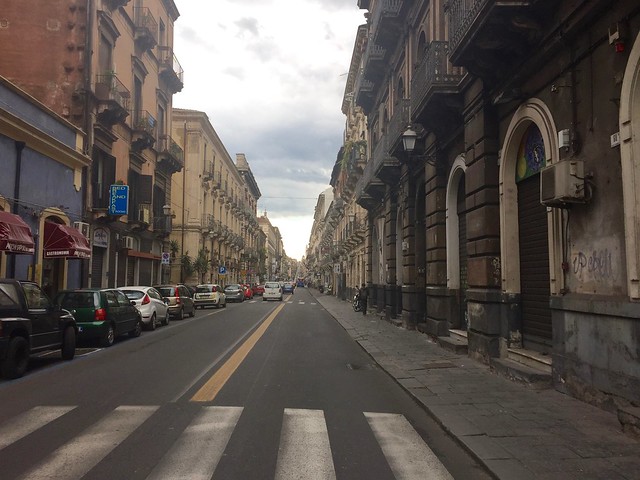 A beautiful city at the foot of Mount Etna, highlighting famous landmarks like The Catania Cathedral, Castello Ursino, Teatro Massimo Bellini, San Benedetto church, Palazzo degli Elefanti, Teatro romano de Catania, Porta Garibaldi, and more, Catania is an ancient port city on Sicily’s east coast. The city is estimated to have been born around 730 BC. Can you even wrap your brain around that date!? I can give you plenty of statistical data from Wikipedia but let’s pull from my opinion…

It’s a gorgeous ancient city. The ancient part totally blows my mind! Buildings are obviously aged hundreds and thousands of years yet, remarkably, remain standing and are well modernized. The streets similar, some of brick, some stone, and others asphalt.

At first I was confused and backwards around every corner. Now I have it figured it out and realize the town center is relatively small. Walking the (dark sketchy) streets is a combination of impressive ancient ruins, beautiful cathedrals, and picturesque squares. "Sketchy": I feel a constant “be aware” sense but the truth is, it’s not so dangerous. Although I’m aware, I’ve never felt unsafe. The feel (unfortunately) comes from the way the streets look...

While the city is impressive, it’s really unfortunate that the streets and walks are littered with trash; the locals very obviously don’t appreciate their deep history (or the environment). Landmarks are not kept up well and in my opinion will be completely broken down to ruins in another 50-70 years. The city has so much potential for tourism but I guess just doesn’t bother. I do see tourist in the main square, Piazza Duomo, but they don’t travel much farther than the few surrounding blocks. Tourism aside, it’s disappointing that the history isn’t being preserved. I mean, some of these landmarks (3 theaters specifically) have survived dramatic volcanic eruptions and earthquakes! And they are left to become ruined ruins. 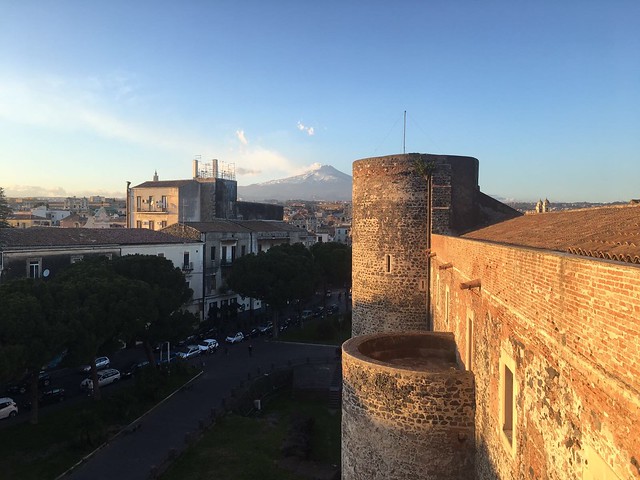 Amusingly said, "Catania is a volcano. Literally and metaphorically. Rage, anger, depression, impatience, tenacity, and powerful chaos – all characteristics which I believe nearby Big Mama Etna has instilled in her people." 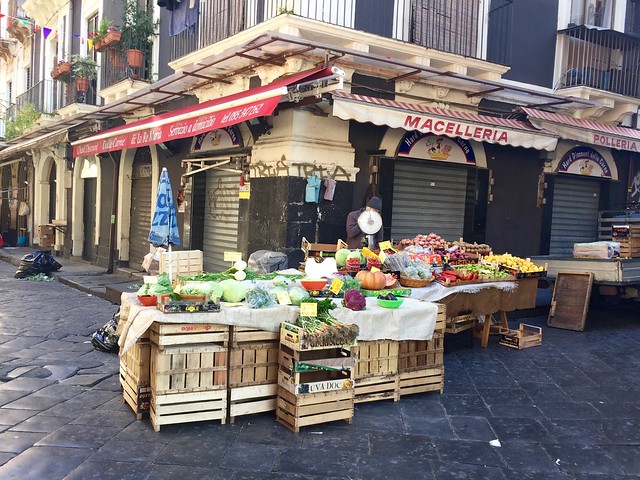 Chaos is certainly a great description! The most chaos is the fish market. It's is a different world… it’s colorful, bustling, and fish are flying (literally)! The fish market moves right into the veggie stands. Even more colorful, these vegetables look, smell, and taste like… like they’re supposed to! Imagine the flavor of a carrot or tomato… now multiply that flavor by a million! It’s hard not to visit daily. 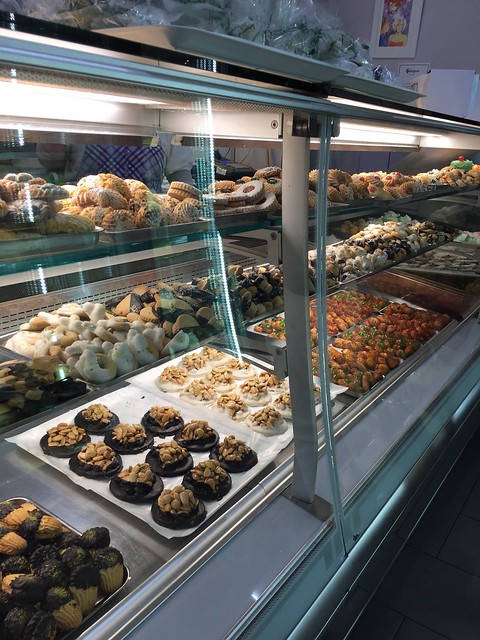 Tons of restaurants and small bars around every corner. Bakeries bakeries bakeries!! Catania is famous for their canolli’s. Lots of people bustling around and crowding the walks. Lots of smoking. Lots of black (as in attire and shoes). Stray dogs and cats wander the streets. The people don’t LOOK friendly but when approached are in fact friendly. Traffic is a nightmare and each road crossing could be life or death. The irony of the hectic busy streets is everyone is on Sicilian time (which is a 15-90min delay, or weeks if you’re a university). Considering everything takes forever I’m not quite sure what everyone is in such a rush for…
Shops and restaurants close from 2-4pm for lunch and family time. Everything you need is pretty much available and many of the little shops have a variety of these needs. I bought a bottle of wine, socks, and a cheese grater all in the same shop. And then there's the specific shops... JUST cleaning supplies and soaps and of course, bread shops, meat shops, and wine shops. 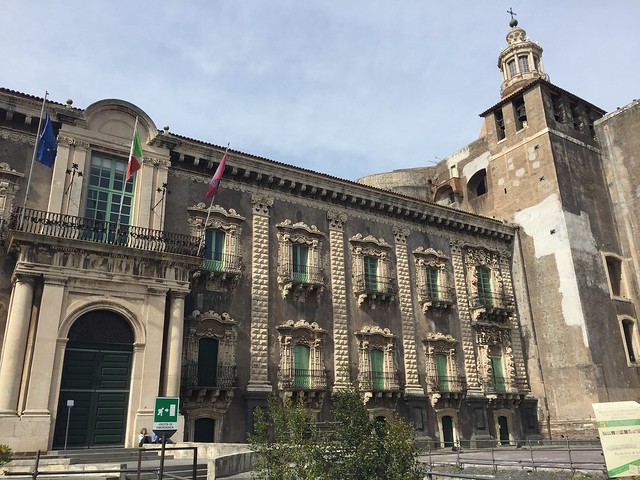 It might be a mess on the outside but it's truly beautiful and rich with history on the inside. I was "warned" that Sicily is very unlike other parts of Italy so just enjoy my time here and be prepared for anything. It can be overwhelming but with Luca here for support, I'm adapting. I get annoyed by a few things and love many other things. It's exciting to explore and find "new" every single day. It's fun to people watch and learn this new culture! I'm picking up Italian from Luca and locals and patiently waiting for my Italian language course to begin!! (take your time Sicily ;) ;) ;)

For more photos, check out my album on Facebook.