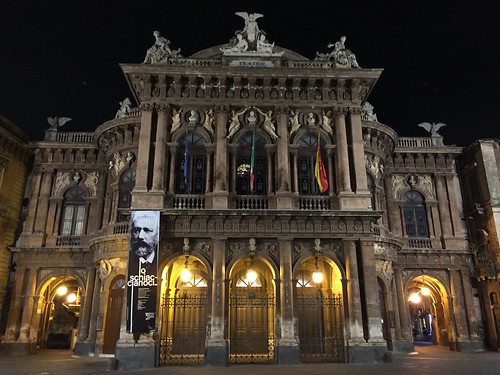 I’ve always enjoyed both theatrical and musical performances live on stage. I am so lucky to have a guy in my life that enjoys the same. Tuesday night theater and music collided for Manon Lescaut at Teatro Massimo Bellini. 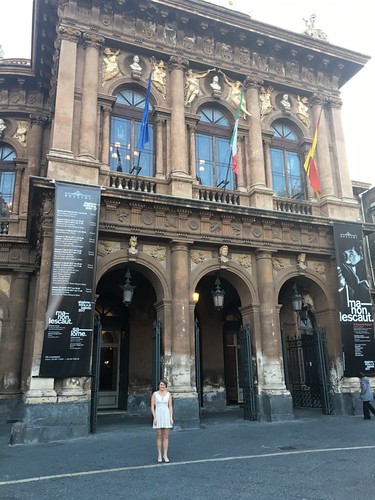 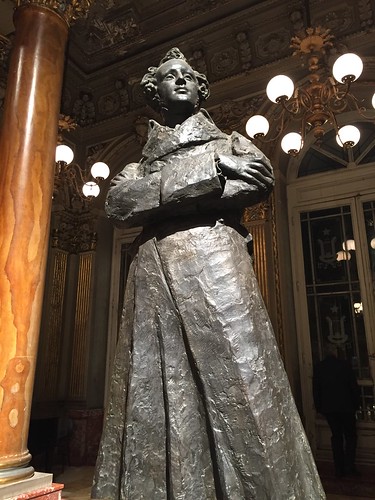 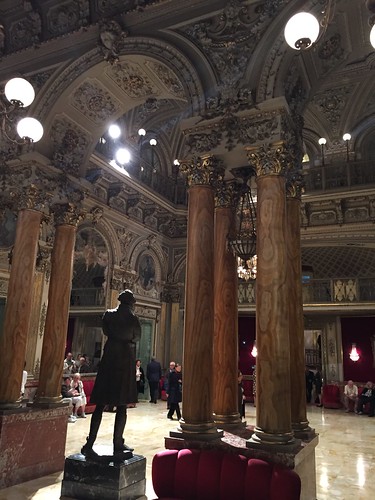 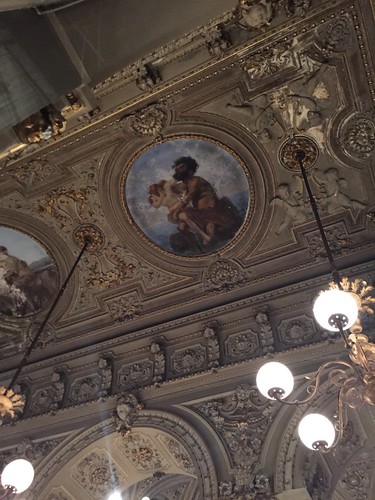 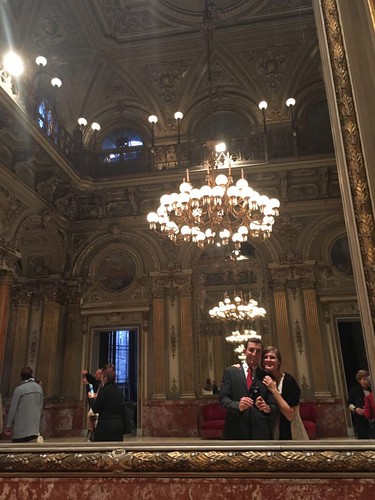 The Teatro Massimo Bellini is an opera house here in Catania dating back to May 1890. It was named after a local born composer, Vincenzo Bellini. According to the theaters history, it took almost two hundred years to create beginning with discussions in 1693. The foundation was finally laid in 1812. With distinctive Sicilian Baroque style on the outside, a marble foyer is ornated and stuccoed on the inside complete with a statue of Bellini. Red plush velvet adorns the interior and the ceiling is marvelously painted depicting scenes from Bellini’s operas. 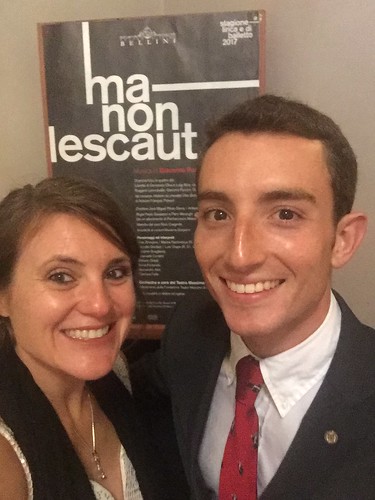 Manon Lescaut, created by Giacomo Puccini, is a beautiful opera, a tragedy, written between 1890 and 1893. The story is based on the 1731 novel, L’historie du chevalier des Grieux et de Manon Lescaut by Abbe Prevost.

Luca and I both (not knowing the other did the same) researched the story of the opera prior to the show. If you’ve never been to an opera, they can be quite difficult to follow. With the Italian libretto, I (we both) would have been completely lost without our pre-search! 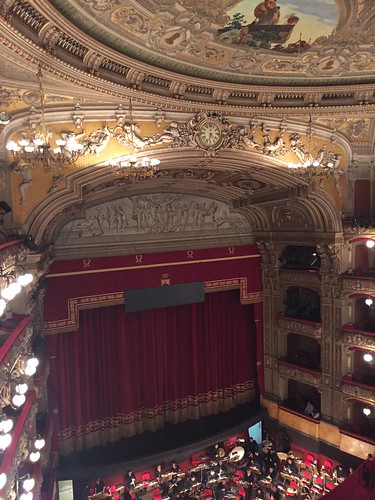 Amazed by the beauty of the theater, we find our seats in the Galleria and it begins immediately… I’m quickly impressed that the theater has not been modernized with microphones or dramatized technology. The set, the cast, the orchestra, the voices… it’s all raw!

The show opens up in a large public square near the Paris Gate. Edmondo is singing of youthful pleasure when Des Grieux enters singing cynically of love. A carriage from Arras pulls up and enters Manon Lescaut escorted by her brother. Des Grieux, changing his tune of love, is taken by her beauty and insists she meet him later. Reluctantly she does, he confesses his uncanny feelings for her and we learn that, at the will of her father, Manon is destined for a convent, her brother as her escort.

Meanwhile, Geronte (an elderly treasurer general) is discussing what a waste for Manon to go to a convent and while Lescaut (the brother) is preoccupied with a card game, devises a plan to kidnap Manon and take her to Paris to be with him. Edmondo overhears the plan and informs Des Grieux. Des Grieux devises his own plan to warn Manon of the abduction and insists that they leave together instead. They do. Geronte tries to get Lescaut to follow them and get Manon back but Lescaut says that Manon loves money and when they run out, which will be soon, Manon will be Geronte’s. 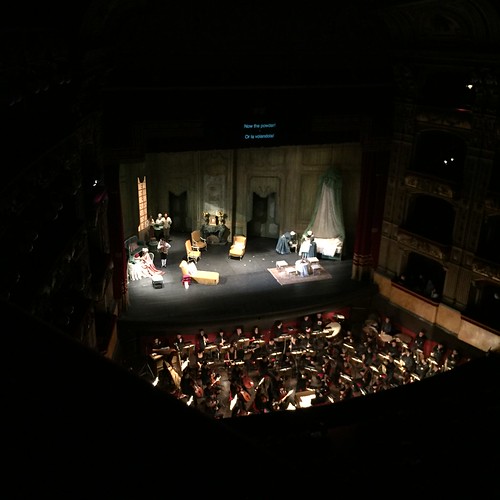 Act Two opens in Geronte’s house in Paris, in Manon’s room. Omitted from the play but revealed in the novel, Manon and Des Grieux lived together for a few months and sure enough, she left him when the money ran out. Lescaut enters the room, having found his sister, and she whines of Geronte’s age and evil and that she is bored, missing Des Grieux, and regretful that she left without a remark nor a kiss. Lescaut finds Des Grieux and brings him to her. She begs for his forgiveness and once again, taken by her, he begs her to leave with him again. Manon is resistant to give up her jewels, pretty frocks, and rich life when the room is invaded by Geronte’s Soldiers dragging her away.

Act Three opens in a square near the harbor in Le Havre. Manon is imprisoned with other girls to be deported to (ironically) Louisiana. Des Grieux and Lescaut devise a plan to rescue her but they fail. Des Grieux expresses his deep grief and despair and begs to go onboard as a cabin boy. The captain of the ship ultimately allows him to board the ship.

Act Four opens in the outskirts of New Orleans. The couple has escaped the doom and making their way across a mountainous desert (I know; they obviously had never been to New Orleans!). Manon is sick and exhausted. She’s dramatic about not being able to go any farther and that’s she’s going to die. She cries about losing her beauty, her unfair life, and her fate, “I don’t want to die.” Des Grieux is so grief stricken, holds her tight, and just repeats how much he loves her and will miss her. Manon takes her final breath in vain and Des Grieux collapses over her body.

Manon has been described as a heroine. Puccini believed “she cannot fail to win the hearts of the public”.  I think she is quite the spoiled brat! Enough was never enough for her. She had love but wanted money; she had money but wanted love. And even when the opportunity came to return to her true love her greed and need for luxury and jewels wrecked his rescue.
Although quite whiny, Des Grieux is the true hero in this tragedy; always forgiving Manon, fighting for her, and continuously giving his heart to her.

The show itself was remarkable!! The voices of these opera singers and the music from the orchestra was emotion evoking!! Even the story is a beautiful tragedy and despite my opinion of Manon, was elegantly and romantically portrayed in this opera!
Courage. Confidence. Determination.
If You Never Tri, You'll Never Know!