Ironman Vineman, It's Just a Hill, Get Over It! 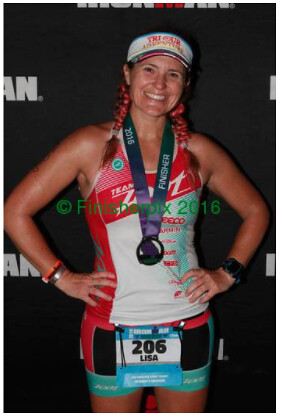 I knew I wanted to do this race after mom finished her first 70.3 here last year. The venue is SO gorgeous, Sonoma County, and it's really a top notch event! I was THRILLED when Ironman bought it and I signed up so super quick... I was even more thrilled to learn that the previous owners would still be the organizers. This race is in its 37th year so I knew I was gonna get the same top notch experience.

My original plans were to return from Brazil, New York, GOBA, pick up Jake, and RV adventure my way to the west coast via Nebraska, South and North Dakota, Montana, Washington, Oregon, to northern California. I had a lot to see and do. As you know, I was rerouted back to Ohio after my brother was diagnosed with brain cancer. Change of plans, I continued training from Ohio, flew to California, rented a car, rented an Airbnb room, and made it a really quick weekend. Which also meant, another solo Ironman :O I honestly didn't fear that so much this time. I guess if you can do an Ironman solo in Brazil, you can do one in California too! HA!

I'm rushing you to the start line... arrived Wednesday, met up with Cristina for a quick workout and checked in at IM Village Thursday, rest food athlete briefing on Friday.

The start line is in a different location than the finish line so the worst thing I have to say about IM Vineman is that it is a bit of a logistical nightmare. You either need a ride to the start or a ride back to your lodging (or car) at the finish. I chose to get a house at the finish line/expo area...
I hitched a ride with another guest at my house to the start. We left ridiculously early, 0430, but it ended up being a good idea. I had plenty of time to get ready, use the toilet, and help get Cristina organized. I was nervous but surprisingly calm and confident. It's way different staring down a calm 3-5 foot deep river than the great big ocean like so many of my previous Ironman. 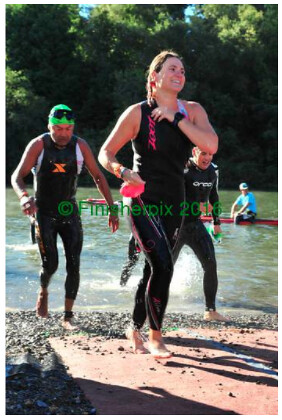 The 2.4 mile swim starts at Johnson Beach which is the Russian River in Guerneville, CA. The course is out and back. The river is actually dammed this time of year so there is very little current. There's also very little water in some spots. You could pretty much walk this entire swim if you needed to. I only had to walk once when it was so shallow that I couldn't even adjust my stroke to not grab a handful of river rocks. Honestly, it was a welcomed break! But most of the time I was swimming past walkers. The water was 74* which felt really warm. I was comfortable in my sleeveless wetsuit though. I was comfortable period!! This was my best Ironman swim!! Despite the narrow river, it was not crowded! I had one giant Asian guy nearly kill me but otherwise, uneventful!
We did a rolling start based on estimated finish time. I entered the water with Cristina between the 1:20-1:30 group. Smart move. I finished in 1:26!! Man was I stoked to see that time on my watch!

Wetsuit stripped and through T1 in 4:49.
The air was chillier than the water but I knew I'd warm up quick so I decided against cycling sleeves.
There's a nice big hill to climb leaving transition. Seriously, it's easier to push the bike up it so most of us did. Why risk a fall 20 feet into your ride!? 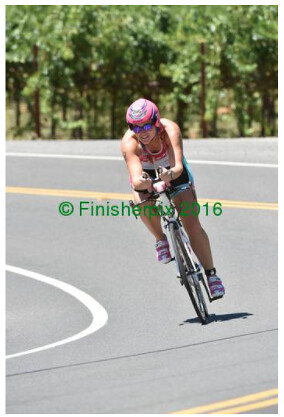 The 112 mile bike course is two loops but point to point. The online course description is EXACTLY
how the bike ride was...
The 112 mile point-to-point bike course passes through the heart of Sonoma County’s wine country. The first five miles is flat and takes athletes through the redwoods. Then it is off through the rolling hills, passing dozens of wineries and literally hundreds of vineyards. It has just under 4000 feet of climbing, including a 385 foot climb on Chalk Hill, which is enough of a challenge because of the location. Its comes at mile 45 and again at mile 100.  A northwest breeze is typical in the early afternoon so would only have an effect on the second loop of the course for most athletes. Air temperatures generally range from the low-to-mid 50s early in the morning to daytime highs between 80 and 95 degrees.
The course, with 4,000 feet of climbing, is mostly rolling with yes, Chalk Hill, a real mother fucker of a hill too!! And maybe two other challenging climbs, but mostly rolling. FUN rolling! That Chalk Hill though at 100 miles!? This is all you heard from athletes mouths, "FUCK". Lots of "fucking" going on. Best sign out there, "It's just a hill, get over it". I think that's my new motto for hills. I love it! There were even people out cheering us on on that hill. Man, did it suck.

It definitely got windier on loop two too.

My nutrition stayed on point even though I lost an eGel early on. I was super diligent taking in salt every 10-15 miles and plenty of water. I stopped at the half way bag to reload, relube, and potty.
I pretty much played leap frog with the same 4 guys the entire ride. I chatted with one for a little bit, Canada. And the guy in the green hated when I passed him. Ha ha! He'd work his ass off to recatch me. But I'd always pass him again ;)
Pretty uneventful! It's a nice course!! Ideally I wanted to see 6 hours but at 6:28, I am satisfied.

Another quick T2, I really don't understand what takes people so long in there. 3:45 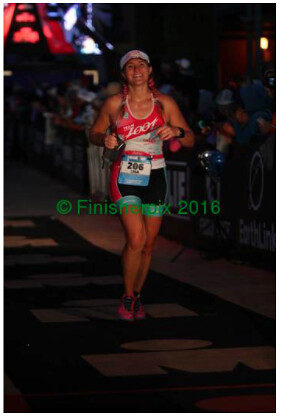 The 26.2 mile run was originally two loops but changed to 3. It wasn't really a loop though, it was an out and back. A HILLY out and back... The longest out and back you can ever possibly imagine. LOL! Seriously, it was just over 4 miles to the end but it felt like 87!! My first mile felt okay but I lost that quick. I don't even want to look at my splits!! And I don't want to allow myself excuses. My back spasmed, my hips hurt, my feet hurt, my tummy was turning but the truth is, I should have trained better on my run. I wanted under 5 hours, I finished in 5:26. I walked a lot. But I had fun!

Volunteers and aid stations on the run course were great!! I took in lots of ice water, some potato chips, pretzels, and chicken broth near the end. As mentioned, my tummy was a bit icky, gassy. I never peed but I didn't get the bladder spasms either. Thank goodness!! I'm getting better at being able to control that. Seeing everyone on the run course was fun too. It appeared everyone was struggling. Those hills!! And it's not even the up that hurts, it's the down! I was so worried I'd have to walk the entire marathon. But I didn't. I ran and walked the whole thing. I tried to stay positive and hydrated. I watched the miles pass away and finally reached that last 'back'. Knowing you are so close to the finish line is both excitement and torture. I couldn't get there fast enough. No, really, ha ha, I couldn't get there ANY faster!!

But alas, the glorious Ironman finish line chute (and it was still daylight!!).
It feels like I'm on stage though, all lights are shining at me, people are SCREAMING and high fiving, music is pumping... I can't even fully describe an Ironman finish, it's an experience.
My body came alive. For those few moments, nothing hurt, nothing seemed impossible, the world felt so colorful and real and rich... It's incredible!! And to have reached double digits... If there's one time in my life that I actually feel like a bad ass, it's at an Ironman finish line. And especially Saturday night. At my TENTH Ironman finish. I don't even know how I keep pulling it off. I mean I do know, I train all the time, I work hard. But so many things can happen and here I am rip roaring through multiple Ironman. It's incredible. Yeah, incredible.

And, so, thank you to all my friends and family for supporting me. There's no way I could get through all of these without you. I hear and feel your cheers with every stroke, pedal, and stride.
Congratulations to #teamTOA athlete Cristina as well. This was her first and she crushed it! She didn't miss a single workout in her entire 20+ weeks of training. Also congrats to all my Team Zoot competitors who tore that race up, other friends racing, my new friends made, and all the other athletes that worked so hard for that finish line, You ARE An Ironman!! 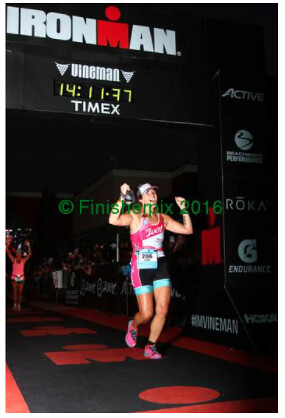 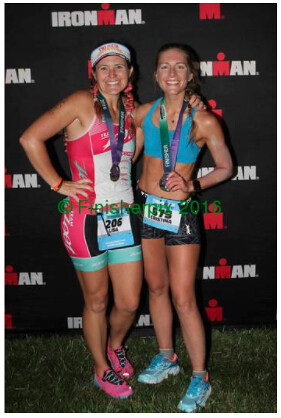 Tips for future IM Vineman racers:
~ bring throw away flip flops for the swim start
~ stay in Windsor and get a ride to swim start, you'll be glad you're close at the finish
~ lodging is limited in general. Book well in advance. I highly recommend Airbnb.
~ train hills. It's legit hilly! (especially train your run on hills)
~ there is NO packet pickup on Friday, you have to be in town and checked in by Thursday
~ stay an extra day and go celebrate at one of the HUNDREDS of local wineries
~ weather in late July is cold in the a.m. and p.m. and hot hot in the afternoon. Dress appropriately and the finish line will be cold!!
Courage. Confidence. Determination.
If You Never Tri, You'll Never Know!