Ironman 70.3 (Delaware) Ohio... this post will be mostly course informative and mostly personal experience, grab your goggles, helmet, and running shoes, we are doing a 70.3 in Ohio...

Let me first tell you about Delaware, Ohio. Once a small town begging to be the states capital is now quite the trendy, happening place! Delaware is a metropolitan of Columbus. It has a charming small town feel but offers very modern big city amenities. It is also the home of Ohio Wesleyan University, one of the top liberal arts colleges in the US. The city is famous for The Little Brown Jug, an internationally famous harness race. I was surprised and impressed by the amount of people out and about in the downtown area. And I will highly recommend stopping and grabbing a cookie from the corner bakery. Typhoon was pretty decent too ~ sushi!! There are a number of places to stay in the area, camping, or you can stay in north Columbus a short drive away.
My fam and I stayed at Flying Horse Farms with my good friend David. 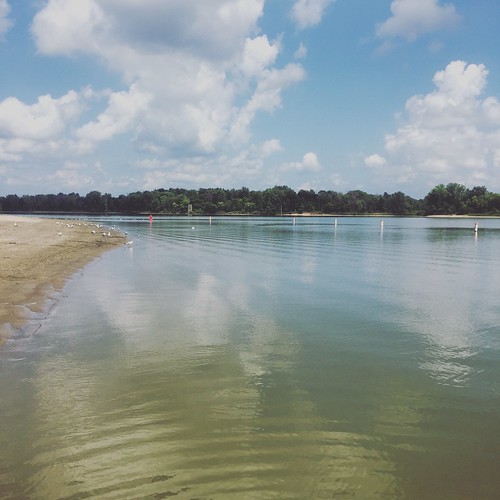 The 70.3 begins at the Delaware State Park Beach. The area is gorgeous! It's about 5 miles outside of town and truly offers the space, the easy accessibility, and the grounds for a well functioning event. It also means T1 and T2 are split up. T2 is at Selby Stadium, downtown. Don't worry, it's also very accessible (but not so spacious). 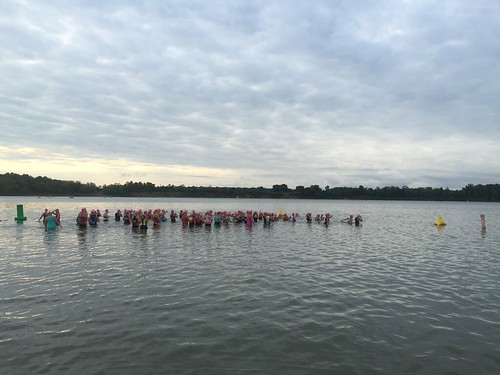 Race morning we gather at the beach and prepare for the first leg, a 1.2 mile swim in Delaware Lake (a reservoir). The water temperature was 79.5, wetsuit "optional". 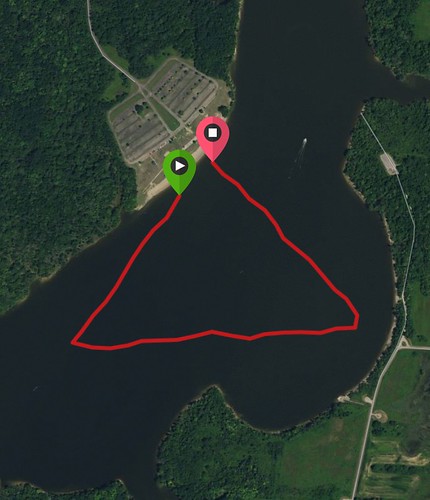 The course was a counter clockwise triangle. I was very impressed by the number of buoys that outlined the course and the water support spread throughout. It was a wave swim start separated by age groups. We were released every 4 minutes so it became an impressive stream of swimmers around the triangle. They did a great job of keeping everyone informed, lined up, and swimming through. We started at 0700 and the final wave of wetsuit swimmers left at 0828.
My biggest complaint is the same with every race, I wish Ironman would double the amount of portajons at the start. There are 2500 of us; we need more than 20 toilets ~ holy shit, right!? *eye roll* 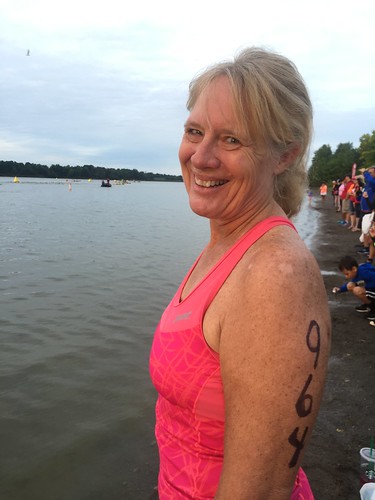 Here's where I share my SWIM... I started the day with a fever and this horrible "I don't want to race" feeling. I have never felt that, I love racing!! I said it multiple times and the reality of no wetsuit in this unfamiliar body of water was yanking all the anxiety cords. I couldn't decide if I truly didn't feel well or if it was fear. I was moments away from pulling out. I really didn't think I would have the energy to swim sans wetsuit (and not drown). But I was worried about getting too hot and just being a pussy. Friends and family were back and forth between "just swim" and "just wear it". I spotted a group of guys putting theirs on and rushed over... you guys think it'll get too hot? They made great points and ultimately I decided pro wetsuit; I wasn't winning today for sure! Plus I knew if I did, mom would too and being a new swimmer, she's WAY more comfy in a wetsuit. And while the anxiety lifted, I still didn't feel good.

I felt lame and we had to swim last. I hate feeling like I'm behind in a race. I had to have a very serious Coach talk with myself: Lisa what would you tell an athlete? This is YOUR race! This isn't about anyone else. I can see my face, hear my tone, and read my body language. I would tell them, "I want you to be comfortable in the water". That this is the shortest but the scariest part of a triathlon. I would tell them to be confident and strong and that it's totally okay to wear the fucking wetsuit. I high fived myself and decided YES! 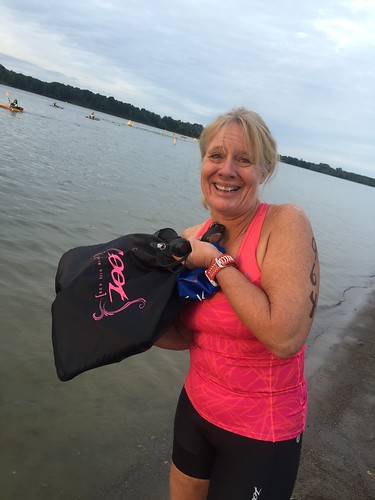 Mom was more relieved than me ;)
Ready, set, swim!! To my surprise, there were a lot of us in wetsuits, party wave!! And to no surprise, I got the hell beat out of me out there! All ages, male and female, all abilities (but probably mostly folks like me that are intimidated by the swim or feel like weaker swimmers) and they were battling out there!! Seriously! I got kicked in the gut, swam over, pulled, punched... it was like a full IM mass start!! I think I caught my own water for about 5mins the whole swim. And when I got about 20mins in, I was truly glad I went with the wetsuit option. I also made a decision, I WILL become a stronger swimmer, no wetsuit!!
Swim time: 47 minutes
And FYI for future participants, the third stretch is rough!! The water got crazy choppy and people got nuts, save your energy for this final 700 yards.

Out of the water, up the beach, and through a parking lot to T1.
Our bike gear was laid out at our bikes. Nothing special here, in and out. Time: 3mins. If I'm fast at anything, it's transition!! *dance dance* 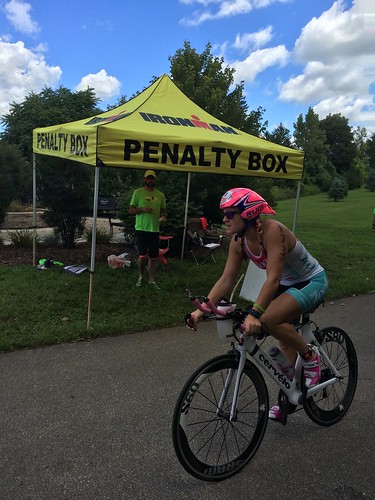 (^ no I didn't get a penalty, that was just where David happened to be snapping photos just before the dismount line).

Delaware BIKE course is a single 56 mile loop. Flat, fast, windy, but quiet. I think one car passed me the entire ride! The course has less than 700 feet of climbing. That's not completely flat, but pretty much; I'd say lumpy pancake flat. There are rough roads though. Not so much that I'd never bike the course again, but there were LOTS of lost water bottles. There are also lots and lots of turns. It definitely breaks up the ride but it also slows the pace. 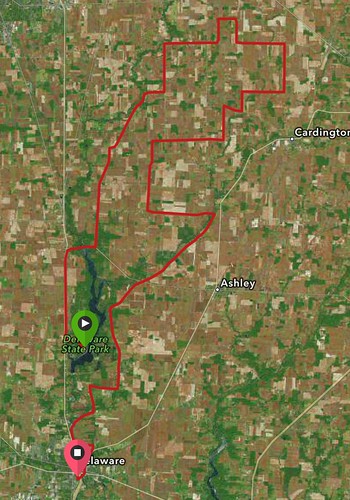 Here's what you'll see out on the course: cornfields and bean fields. Lots of farms. Lots of green. It was beautiful countryside!! We definitely had a headwind in every direction. Lots of support, well marked, great spectator opportunities, and the community was out there all over the place cheering us on!! Oh, and Mandy #43 is super well loved. That girl had a support sign every 10 miles, it was fun. Overall, despite all the turns, the design and atmosphere is ideal. I think I would have liked 3 aid stations total spread out better.

But what do I know, I screwed up my nutrition out the gate! My watch was set for full feedings instead of half feedings. I got off track and paid for it later with a hungry belly and foggy mind. I still had a strong bike at 3 hours. My intent was not to push, just to ride comfortable. The wind sucked, but at an almost 19mph average, like I said, I was comfortable.

As mentioned, T2 is at Selby Stadium (they put some serious money into that stadium!). We dismount and run our bikes on to the field where our run bags were dropped earlier that morning. This is a complaint... we had to drop our run bags here early early a.m. then take a shuttle (or catch a ride) to the start to drop bike bags and swim. Why would there not be a run bag drop yesterday!? It was very time consuming and back and forth nonsense. Here's what needs to happen: packet pick up at Selby Stadium followed by athlete meeting opps followed by run bag drop off. Then, bike and gear drop off over at the beach. All on Saturday! First year error?? Fix it Ironman!! T2: 2mins 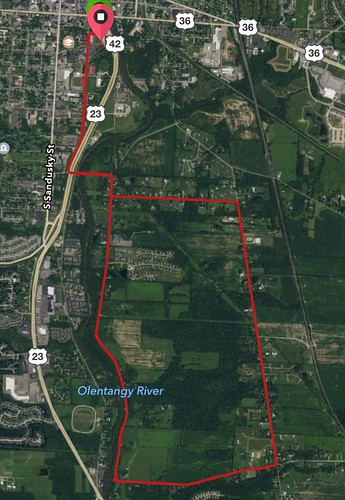 Lots of energy on the RUN course. Great spectator areas the entire route. We ran 1 mile to our loop, looped twice (about 5.5 mile around), and 1 mile back to finish. It was super shaded and super rolling hills. Not hard ones though! I didn't even have to walk them. The course went quick! The aid stations were well spread out and plentiful. The volunteers were awesome. Lots of people everywhere, great local support. One guy even had his sprinklers on for us. 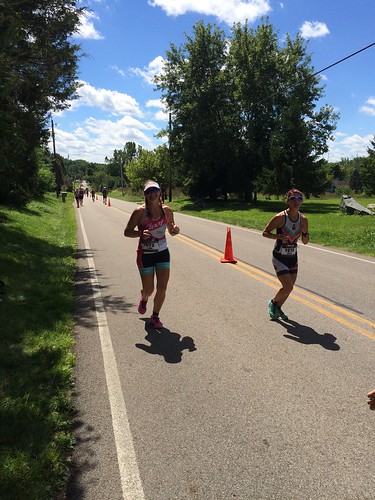 I was determined to run the entire time walking only through the aid stations. Honestly, it went well. I only needed to walk a bit more on the 2nd loop and final stretch when my mind was getting foggy with dehydration and lack of nutrition. I know better! I caught up with mom on her first loop, me on my second. I was SO excited to see her and told everyone on my way to catch her, that's my mom, THAT's my mom!! MOMMM!!!! To my dismay, she was run/walking with one eye swollen shut. WTF!? She tells me that she's raced the entire day with one eye swollen shut. Are you kidding me. She said that something went in her eye when she put her goggles on and it got progressively worse all day. Well, it turns out (doctor trip on Monday), she legit scratched her cornea. Probably some sand in her goggles or something. Excruciating pain! But guess what, she still raced AND came is at 7:57. BOOM! 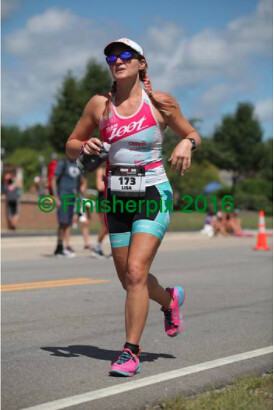 And I wasn't so far in front of her at 6 hours and 30 minutes. I wanted to break 6. I always want to break 6. But this is okay too. I'm very okay with my time, my race, and who I am as an athlete. Of course always striving to be a better version of myself too ;) 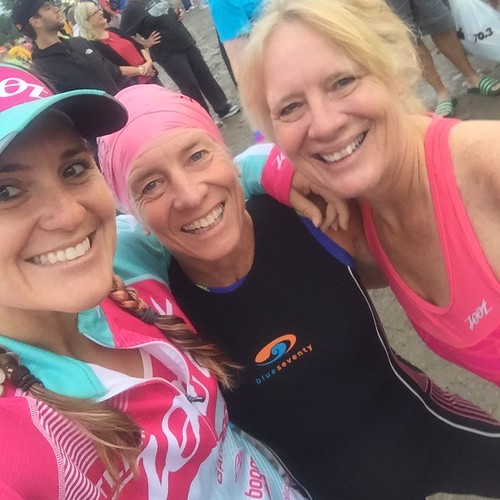 My Aunt Cheryl finished her race around 5 hours 30 minutes. She's such a beast!! She claims she had a poor run. And according to her standard, she probably did. But I'd take her run any day!! She deserved a strong race after a few race mishaps this season.

The run finishes on the track at Selby Stadium, a very nice finish line with plenty of spectator viewing area. Lots of volunteers and support too. 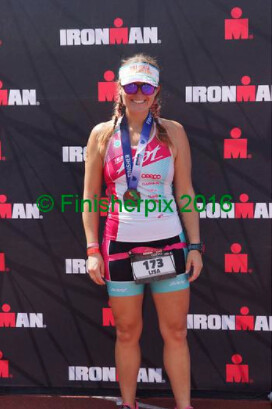 Moving into the after area, it was CROWDED! Usually at a full Ironman event, this is an athlete only area and due to the size here, I think this one should be too. I shouldn't have to muscle through a crowd to get to water. Other than that, Delaware had good athlete food and drink choices, music pumping, and a good atmosphere. They did awards and slot allocations on time. They let us into transition right away to clear our gear. They really did a great job this first year!! 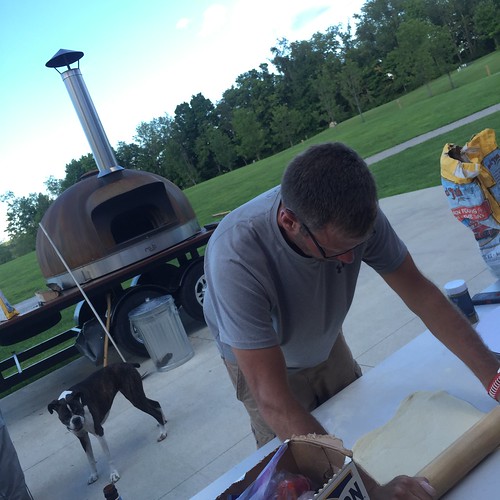 Post race we headed back to David's place where he prepared specialty wood fire roasted pizzas for us and sipped on some Blue Moon's.

Overall, my opinion of this first year race is positive. I think the directors have a little bit of tweaking to do to reach the Ironman standard, but they nearly matched the race that you can expect from the brand. The venue is fabulous and the course design makes for a flat fast day.
It was really fun to be able to race with my mom and aunt. It was fun to see Ohio friends on the course and share the day with one of my best friends, David. Finally, having spent the majority of my summer in Ohio, it was a great kick off to finish the summer in Ohio!!
Courage. Confidence. Determination.
If You Never Tri, You'll Never Know!