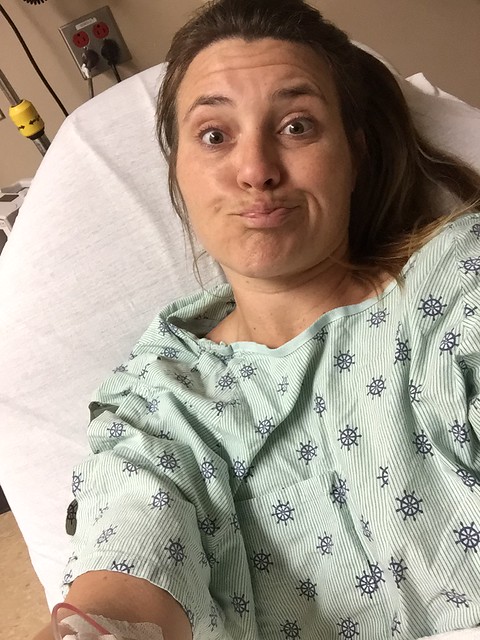 Monday, Sept 23, 2019 - here I am, it's Monday morning and I'm still in the hospital. I was admitted yesterday after coming to the ER. I honestly thought they would be like, "Oh, you have gas stuck up in there, here's some max strength gas-X, get out of here ya crazy triathlete..." And I'd be on my way. That didn't happen. So here IS what's happening:

Pretty quickly I was given an EKG, bloodwork, and sent for a CT Scan - obviously blood clot and heart issue being the first concern. My BP was super high but HR was super low. All labs are PEREFCT.

CT Scan showed some inflammation around my gallbladder but not necessarily the gallbladder. Also showed some fluid building up on diaphragm/chest - but probably because of inflammation. Additionally, they're seeing ground glass opacity in my lungs and later it was called pulmonary edema. Honestly, no one was clear and I discovered, everyone was quite stumped - recall, lab work is PERFECT. So I was admitted.

First thing this morning a surgeon visited me. Still a bit unclear about what's happening but he's confident an ultrasound will show more. Soon I was wheeled off for that and gave more blood. After chit chatting with another doctor, and my history with rheumatic fever, we went ahead and hooked me to a halter and did an echocardiogram <--- this is all because of the shortness of breath and lung thing going on which it sounds like everyone agrees is TWO SEPARATE incidents - the lung debris being found because of the explosion going on under my right rib cage.

They actually want to bring a lung specialists in to run more tests while we're waiting for a read on the ultrasound <--- Coming Soon!?!?!?

Tuesday, Sept 24 - no one ever came last night with ultrasound updates. I feel like I am not receiving any kind of exceptional care and attention which is growing my frustrations. I've basically been crying all morning just because it seems to be the only thing I have any control over.

Early this morning yet another surgeon arrived. Based on the previous scans, they still aren't entirely sure what's going on, but still focusing on the gallbladder. Hearing "blood and fluid pooling" is scary. Especially when HOURS go by w/out answers nor even a visit from a doctor. Why isn't anyone doing anything?!

Today I'll have a HIDA which is a scan that involves watching (w/ultrasound and X-ray), radioactive dye flow through my blood to my liver, gallbladder, and bile ducts.
We're also still waiting on a pulmonary specialist (the lung doctor) which is a completely separate incident from the pain/bloating.

0900 a.m. - a G.I. doctor was summoned and came to chat. He had pretty good news although it's not 100% yet... He said that right now the surgeons are NOT considering surgery/gallbladder removal. This is a huge relief. But obviously, I still have an issue going on.

My gallbladder appears to be functioning normally, it itself is not inflamed, just the area above it. And it has thick walls. But it's not diseased or inflamed itself. All my labs are perfect. Surgeons say liver, doctors say gallbladder. I'm a bit of a mystery. But the NO SURGERY sounds awesome.

1230 p.m. - I've just finished the HIDA scan. This should be the tell all if these issues are gallbladder. If they ARE, then we know! An answer. And we'll discuss what's next. If they are NOT, then I'm still a mystery. So far, readings indicate that things are going IN okay, they have to do the assessment of whether or not things are going OUT...

Also still awaiting lung specialist. The ground glass opacity findings from the CT scan are incidental. The two issues have little to nothing to do with each other and I can even see this specialist as an outpatient later.

1330 p.m. - the GI team arrived in full force. Although they hadn't yet seen the results of the HIDA, they are confident that this is NOT my gallbladder - actively. Instead, perhaps I passed a gallstone Sat/Sun and this is the aftermath of it. There is nothing actively happening in my liver, gallbladder, diaphragm, heart, or lungs. So this is GREAT news right!? As soon as they left...

Enter my nurse. You just missed the whole GI team!! I told him what they've just said and he says, let's peak into your records and see if HIDA has results yet. THEY DO. Results are in and my gallbladder is functioning!!! Whatever is happening is NOT my gallbladder. Stuff is going in - stuff is going out (and at 72%!!). The GI team still needs to see this and of course my doctor, and hopefully I can be discharged.

I'm a bit uncomfortable that we don't really have a solution or a WTF just happened - but I'm happy to report that pain has mostly subsided (although still tender to the press or a deep breath) and shortness of breath has chilled out. I'm also scared it's going to come back. Guys, it can't. It just can't.

I asked for prayers and good vibes and it worked! Thank you!!
Courage. Confidence. Determination.
If You Never Tri, You'll Never Know!