While I usually write a story describing my adventure, I’m going to try, this time, for a bullet point run through, sparing you some of the mundane details of race prep. I hope you enjoy!

And oceans are washing machines! But at least it was better than the previous days! It was moving, but not crashing.
Fill your wine, here's where it gets ugly...
So, I have this bad habit of not checking out the course of a race. I just think, ooh that sounds like a cool place to race, and register. I have found myself at some of the hardest IM on the circuit. Eventually I might look at it but it’s usually deep into my training. Why do I do this?! Idk, but it’s lunatic and I screwed myself big time.

You see, I raced Ironman Barcelona (the full) in 2015 and finished with my best IM time. The bike course was fast!! A bit rolling but fast rolling!! I had a 6 hour split. I just assumed this was the same course, only half of it!! I even looked at the elevation profile and thought, hmm I don’t remember it being quite like that, but I was so sure it was going to be fast.
My goodness I was glad to be off that bike! I didn't even know how I was going to possibly run, my legs were jell-o. Not even! My legs were the liquid that jell-o is before it's jell-o! T2: 6mins 2secs
Despite that, or maybe because of that, I was feeling fierce.
Overall Finish Time: 8 hours 17 minutes 42 seconds read, FINISH. I finished *cheeeeeers*
(For reference, previous 70.3 finishes (10), my average is a 6 hour finish)

So I really feel like I was lacking (kind of) 3 crucial elements for Barcelona 70.3

DESPITE - I got it done. And I love that and I appreciate you reminding me of that and a finish is a finish! The last athlete ran the same course as the first one! I reminded myself that during the race too - I told myself, ya know, they trained different than you. Some better. Some worse. Some have gifted abilities. Some train right here on these mountains. But, just, different. We're all going to finish.

Lessons to take home:
1. Be fucking confident. Clearly I can swim open water. Own it!

2. Start looking at the course BEFORE you register. Speaking of which, better go check out Kona...
*later insert: 5000+ feet of climbing - NOTED!!

3. Don't blow off training. It doesn't matter if you've done 15 Ironman or shooting for your first: YOU. HAVE. TO. TRAIN. This sport is not a go outside and learn to hit/kick/throw a ball. Can you jump in a sprint and probably get it done without much training? Yeah, maybe, if you know how to swim and own a bike. But beyond a sprint, it's not a game - it's a sport. It's a mindset. And it's a lifestyle. You have to be determined, committed, and you must be physically involved. TRAIN! 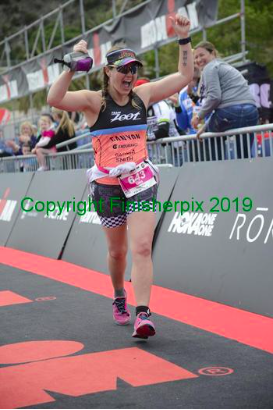