Hiking and Exploring the Cinque Terre


As of Saturday, April 20, 2019: Current: Vernazza to Corniglia Blue Trail is currently closed due to poor weather last week for an unknown amount of time.

It has recently been published that proper shoes are required for hiking the trails. The trails are mostly dirt, stone, and steps. Tennis shoes, running shoes, hiking shoes/boots are necessary. You can be fined up to $2,800 for inappropriate footwear!
Also, highly recommended you bring water (especially in warmer months). There are no water stops between the villages.

(note, this post is often being updated with the latest trail hiking news. I live here and hike the trails often. Feel free to send me any questions!)
(scroll all the way down for What to See/Do in each village)

One of my favorite escapes!
The Cinque Terre (five lands) are five very beautiful, vividly colorful fishing villages located on cliffs overlooking the sea. A Unesco World Heritage Site since 1997, and thus frequented by tourists, the Cinque Terre isn't the undiscovered virgin land it once was. That doesn't mean it isn't worth every square inch of its beauty! In this post I'm going to share both the hiking/walking adventures available as well as what to see in each of the five villages.

The Hiking/Walking trails offer unbelievable scenery which draw many tourist to the Cinque Terre. A few of the most favored trails, the easier, shorter ones between the villages, are closed. But not all of them! And there is plenty of hiking surrounding the CT as well.

There are two trails between each of the villages - the lower one (Blue Trail). This is the most popular and well traveled trail. Details for each section are below!!
And the upper one (Red Trail or High Trail). I'm going to warn you now, the upper trail is long and difficult... 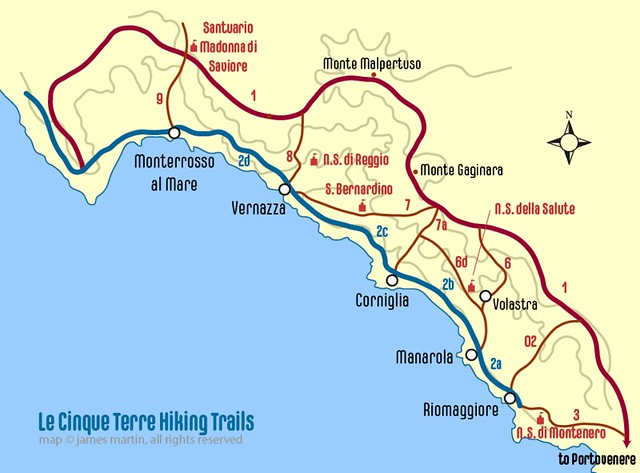 Here's a brief to what trails are open/closed:
Monterosso to Vernazza is open!
Both trails. The Blue Trail is 3.8km (2.4 miles, elevation gain almost 800 feet or 250 meters - profile below), easy to moderate. This route can be quite tiresome if you are not fit but it offers spectacular views!! The trail is marked well in white and red. It leaves from the eastern part of the old town of Monterosso. Take the small pedestrian road leading to the Hotel Porto Roca. The path begins with a long staircase (this is as difficult as it gets). The footpath continues flat, but in some parts it is very narrow and a little rolling. The trail passes on an antique stone-bridge, which is really worth a picture! When the trail begins to go down, the view of Vernazza is really breathless. From the bottom of the stairs in Monterosso to the bottom of the stairs in Vernazza, it is exactly 2.4 miles.

The upper route is 7.3km (4.5 miles), moderate to difficult - recommend for advanced hikers. 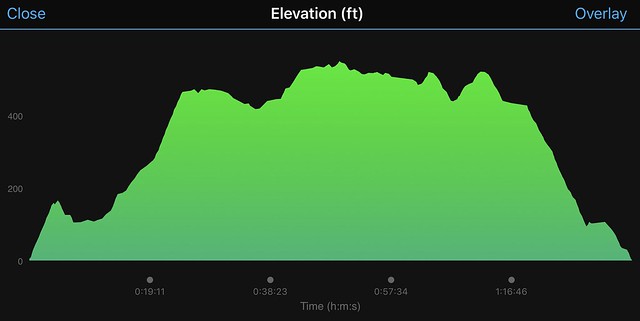 Elevation Profile for Blue Trail hike from Monterosso to Vernazza

Corniglia to Manarola: The Blue Trail is closed. The long route is open!
The upper route is 3.1km (2 miles), easy (but there's a section of difficult stairs).
It goes through Volastra. From Volastra to Manarola there are about 1,200 steps to tackle.

Manarola to Riomaggiore (Lover's Lane) is closed. Both routes are closed due to landslides. There is one small section of Lover's Lane that you can capture some beautiful photos and enjoy a drink at a bar, but otherwise, no hiking.

If you only have one day: I recommend starting in Monterosso, explore for an hour, hike to Vernazza, explore and enjoy lunch, and hike to Corniglia. Once in Corniglia, grab a gelato or lemon slushy.

Next, make sure you take the paths down down down to the sea. It's not an easy climb back up (lots of stairs), but you can take a dip in the sea and it's just fabulous down there! Take the train to Manarola, explore, and then the train to Riomaggiore. The villages are small enough that you can explore for an hour if you only have one day in CT. If you have more time, spend more time and go through each site! Alternatively, start in Rio and head towards Monterosso. 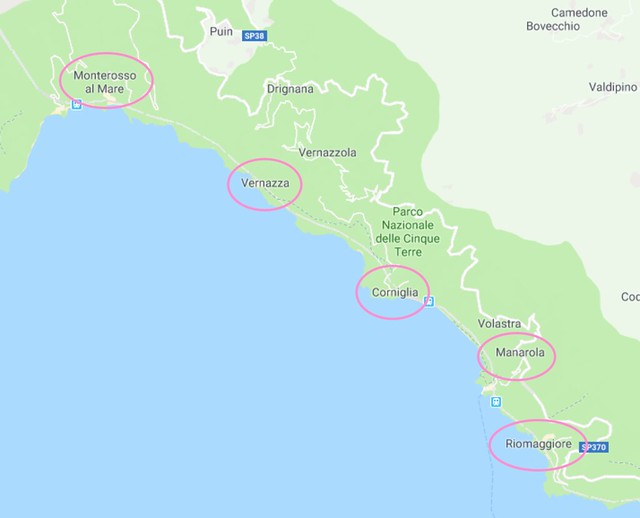 For all of those trails, you need the Cinque Terre Card. They will check your card or charge you on the trail. So either buy the card in advance or carry cash. It's cheaper to buy the card before you arrive (7.50euro as opposed to 9euro or whatever the guy wants you to pay onsite; no CC accepted!).
You can get the Trekking card for hiking only or the Treno card which includes all the trekking and unlimited train services. I recommend this one!

Those are the most popular and sought after trails. Now let's explore some of the others!!
Back up to Monterosso. There is some beautiful hiking continuing north!

Monterosso to Levanto is open. The trail is 6.8km (4.2 miles), moderate to difficult.
You don't have to do the whole trail. You can hike to Punta Mesco for some photos and head back to Monterosso. This portion will take you about 90mins roundtrip.

If you go all the way to Levanto, there is more!
Levanto to Bonassola to Framura is also open. This route is 5.7km (3.5 miles) and very easy.
This is an interesting trail as the old railway tunnel was restored and transformed into a cycle track. The most popular part of this stretch is between Levanto and Bonassola. The road often comes out of the tunnel into the open and from these points you can go down to the small enclosed beaches that are located along the route. You can even rent a bike. 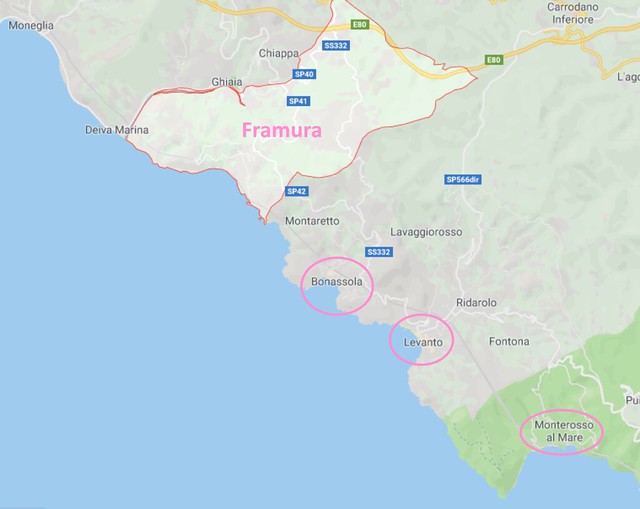 If you love hiking, there is even more to explore:
The Ring of Riomaggiore open. 3.5km (2.1 miles), easy route.
The Sanctuary of Montenero, near Riomaggiore, is well-known thanks to the beautiful panoramic view that it offers. The best thing to do is to take this trail in a clockwise direction, because from the Shrine to the village you will find a great number of steps.

The Ring of Vernazza open. 6.8km (4.2 miles), moderate difficulty.
This trail passes near two shrines. I recommend taking the trail in a clockwise direction.
If you follow the trail counterclockwise, you have to purchase the Cinque Terre Card, because the first fifty meters of the trail passes along the Blue Trail. Also, the ascent to San Bernardino is very tiring, so it makes no sense to walk the trail in this direction.

The Island of Palmaria open. 6km (3.7 miles), moderate difficulty.
You don’t have go the whole way around the island, it just depends on how much you want to do, and the time you have available. You can do a short walk or the long one, visiting all the hamlets on the island.

Riomaggiore to Portovenere open. 12.7km (7.9 miles), moderate difficulty.
The longest of the famous trails of the Cinque Terre. Plan for an entire day of hiking, 6-8 hours. And bring lunch!!

If you're the most serious of hikers, this one is for you! It's the entire High Trail (info to come).
See a list of all 48 trails here.

Whether you're hiking to explore the villages or taking the train between the five, here is what to see and do in each village:

Monterosso is the biggest (about 1,500 inhabitants) and the oldest of the Cinque Terre’s villages. It is divided into 2 parts: the old and the new village. The biggest beach of the entire coast is situated here; because of this, it is the most visited town. It has a very resort kind of feel; plenty of restaurants, the only real beach, and it has the most activity of the CT. 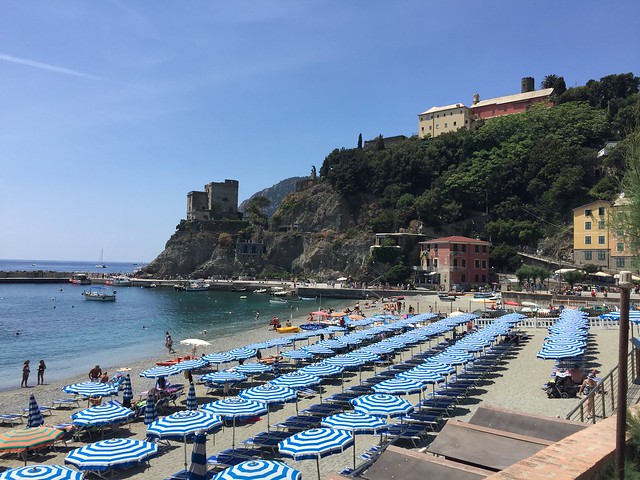 What to see in Monterosso:
Vernazza is considered to be the most beautiful of all the Cinque Terre’s villages. The most beautiful pictures of the village can be taken from the the walking trail; photographers LOVE Vernazza! A very picturesque landscape. In Vernazza there are two tiny beaches and tons of restaurants and bars. Quite crowed as well. Most will claim Vernazza as their favorite CT. 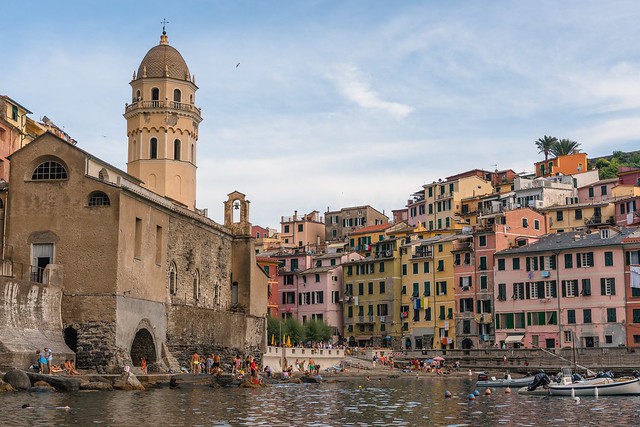 What to see in Vernazza:
Corniglia is the smallest and the highest of the Cinque Terre five villages (and my favorite!). It is the only town that does not have a seaport. It is very difficult to reach by car, so the only options available are either by train or by foot. It's a very romantic village and much less crowded than the others. It's also home to the most farming of the CT: olive trees, lemon trees, and vineyards around every bend. 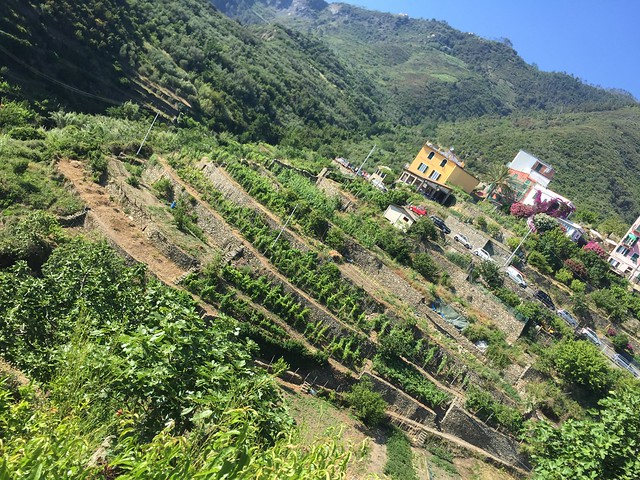 What to see in Corniglia:
Manarola is the second village of the Cinque Terre on the side of La Spezia. Seemingly to hang off the cliff, it is only 500 meters from Riomaggiore. It's very colorful and very photogenic. The station is separated from the town by a tunnel, which is quite spacious and beautifully designed inside. 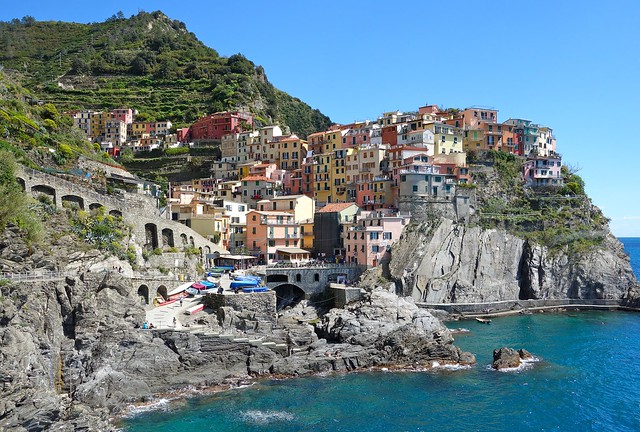 What to see in Manarola
Riomaggiore is the furthest south village of the Cinque Terre (nearest to La Spezia). The main town is separated from the railway station and the wharf by tunnels, so it can be said that the town is divided into three parts: the railway station (from which the famous Lover's Lane starts), the old town, and the wharf. You'll find plenty of photo ops, services, and small boat tours here. 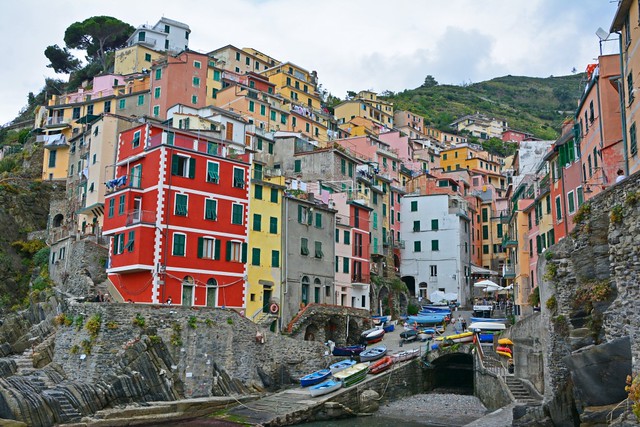 What to see in Riomaggiore
Portovenere is not a part of the Cinque Terre, but it is beautiful and worth a visit! It is impossible to reach to it by train so you need a driver, a car, or take a bus! There are also some islands to visit from Portovenere. This village could easily be a day trip away from the bustle of the Cinque Terre.

What to see in Portovenere:
Nearby Lerici is also worth a visit. No train to Lerici either.