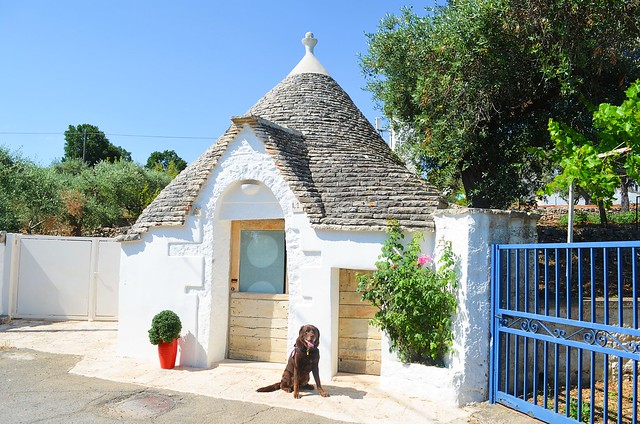 I had never heard of a trullo or trulli before booking this trip. We actually stayed in a trullo in Lamie di Olimpia, another small town in Puglia. But Alberobello is known for it's trulli and it's a MUST SEE! Around every corner I was amazed...

This was probably my favorite stop and I took tons of photos! There is trulli no other place like this in the world! Check out my photos here

History of the Trulli

In the words of Unesco, which declared Alberobello a World Heritage site in 1996, the easily recognizable trulli (the singular form is trullo) are: “remarkable examples of drywall (mortarless) construction, a prehistoric building technique still in use in this region. The trulli are made of roughly worked limestone boulders collected from neighbouring fields. Characteristically, they feature pyramidal, domed or conical roofs built up of corbelled limestone slabs.”

In the 1500's, the Acquaviva family, the local rulers within the feudal system, wanted to avoid paying property taxes to the King. They ordered local peasants to build their houses and dwellings without mortar so that, in the event of a royal inspection, the structures could quickly and easily be taken down, and the tax bill would remain low. Using local limestone and some ingenious building techniques, the local population created the trulli, many of which remain standing today (a double achievement given their purpose was to be easy to dismantle).

Fast forward to the 1700s and, after several petitions from discontented citizens about the ongoing treatment and rule by the Acquaviva family, the King granted their wish to become a ‘royal’ town, and therefore free from the whims (and tax-dodging preferences) of their feudal lords.

After this decree there was less reason for trulli to be built. However, they stand today as a testament to the lengths the powerful will go to keep their wealth, and the perseverance and resourcefulness of the powerless to make the best of their situation.