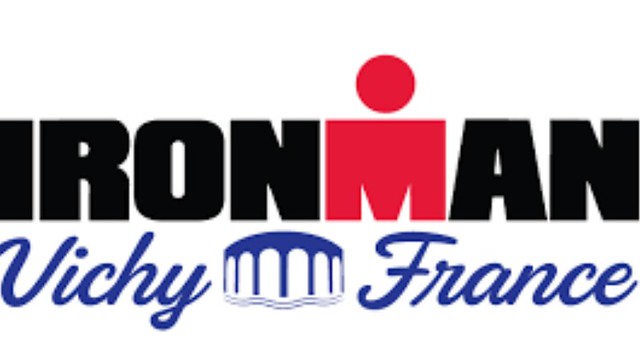 The History. Registering for my Kona Legacy slot meant I had to be signed up for an Ironman in 2018. Usually I say, I want to go to 'insert random country' and boom, I choose the Ironman. It always seems to be the hardest Ironman on the circuit. This time, I read Every. Single. Ironman description and selected Ironman Vichy w/purpose. Vichy was a less challenging 'fast' course which meant if I got selected for Kona 2018 it wouldn't break me off with less than 2 months to the race. Awesomely, it also had a 70.3 attached to it on Saturday and I thought if Luca could train for it, he could race and/or mom could come race too. Luca was too busy flying all summer to train but mom agreed, this will be our annual race-cation and we'll couple it with a trip to Greece. Even better, we drag (my niece) Alyssa along for her first international adventure.

Mom, Bob, and Alyssa showed up in Italy at the end of August. Alyssa stayed with us while mom and Bob ventured off to Normandy, France. After seeing a slice of Italy, she, Luca, Jake, and I drove to Vichy, France where mom and Bob would also meet us. Now we're in Vichy. That adventure is another blog, but full circle, mom finished the 70.3 on Saturday (yet another blog/race report from her!) while I took on the full Sunday... 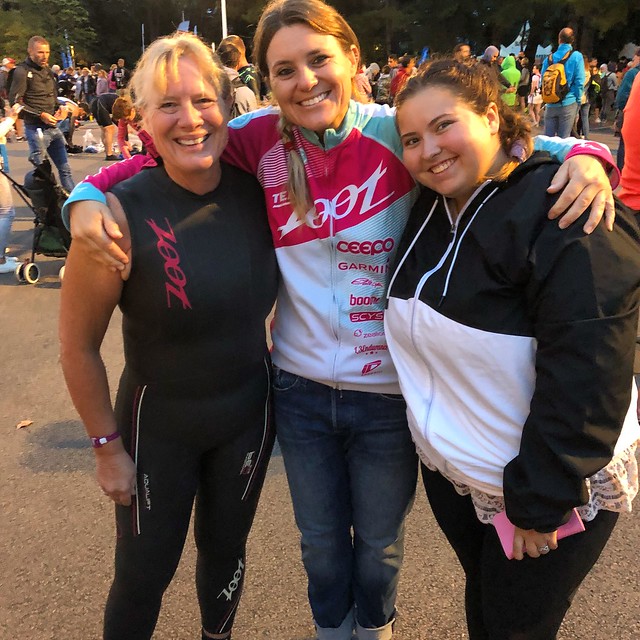 A chilly morning in Vichy, France, anxiety was high but I was calm. It feels like it's been forever since I've done an Ironman. Almost a year actually - Ironman Italy last September.
Luca, mom, and Alyssa were up early to support me; Bob was preparing for his day as a medical volunteer. Breakfast included two bites of oatmeal, half a boiled egg, and half a peanut butter sandwich. It’s tough to eat before an Ironman with a stomach full of butterflies but I know I need the calories.

Arriving to transition/start, I check my tires, my bike, add my nutrition, and prepare for my swim. 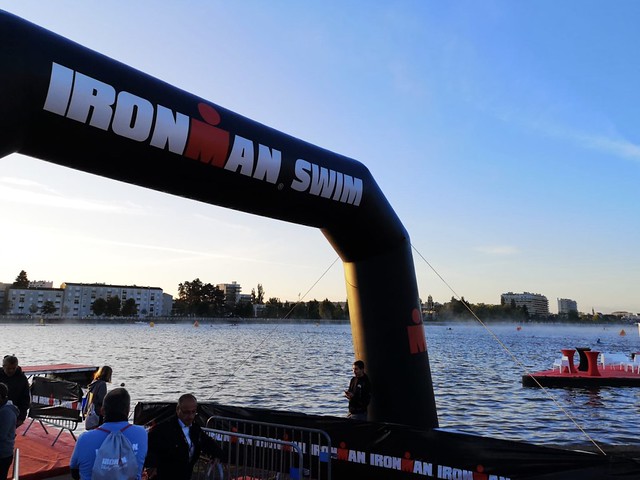 The Swim. The shortest but most mentally demanding leg of the race for me. I realize I forgot my earplugs. Shoot shoot shoot!! I didn’t just forgot them this morning, I didn’t bring them at all! Luca and mom rush back to the apartment and collect my aquapod earphones and some squishy sleeping earplugs for options. The squishies felt good and phew, crisis averted. LOVE my support crew! 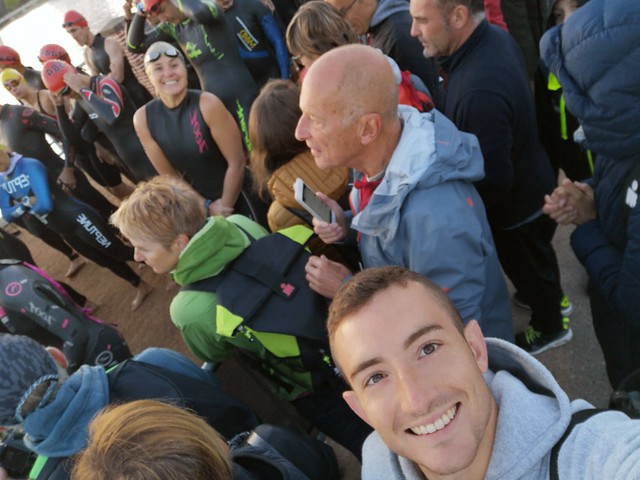 The course is a two loop swim in a damned river (so they call it a lake) with an Australian exit (which means you exit the water, go over a timing mat, and re-enter) ~ I love the break! The water temperature (for the first time at IM Vichy) is wetsuit legal ~ what a relief!! I was most nervous about this aspect.

I proceed with the 90 minute group for the rolling start of 6 athletes every 6 seconds. Luca, mom, and Alyssa are by my side the entire time encouraging me and calming my fears. Approaching the dock I am suddenly FIRED UP and I’m feeling it; I got this!! I decide to sit on the edge and push off into the water. I can't believe how nervous I still get before an Ironman and how calm I feel once I get started. 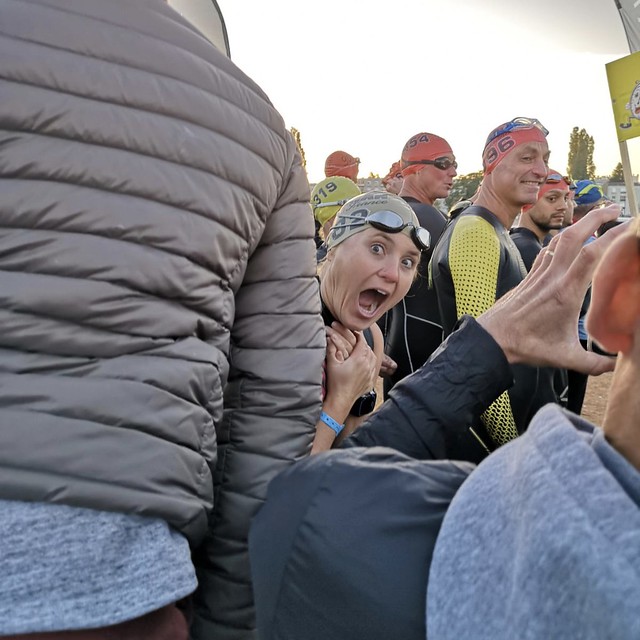 The water was chilly but not cold. I could tell I would get used to it quickly although experience told me I would also get cold later. I’m wishing I would have worn my wetsuit sleeves now, but it’s ok, I’m going to swim fast! I felt confident for a 90 minute finish.
My strategy was similar to all my races, buoy to buoy, just keep swimming. I stayed as inside as I could and fought very few battles. I got punched in the head hard once; the guy came up and actually apologized. But otherwise, no troubles. I was VERY happy to have my wetsuit on.

I reached the farthest point out of loop 1 and turned to come back. The swim got a bit trying here because of the glare of the sun. It was rising to my right, I breathe to my right, and the buoys were yellow. Just keep swimming. I also noted my watch (which alerts me every 1,000 meters) wasn’t aligning with their meter markers (which were every 500). I knew mom’s swim yesterday for the 70.3 was long but her loop was our second loop. Grr. I locked in my mind right then, this is going to be a long swim. Just keep swimming. 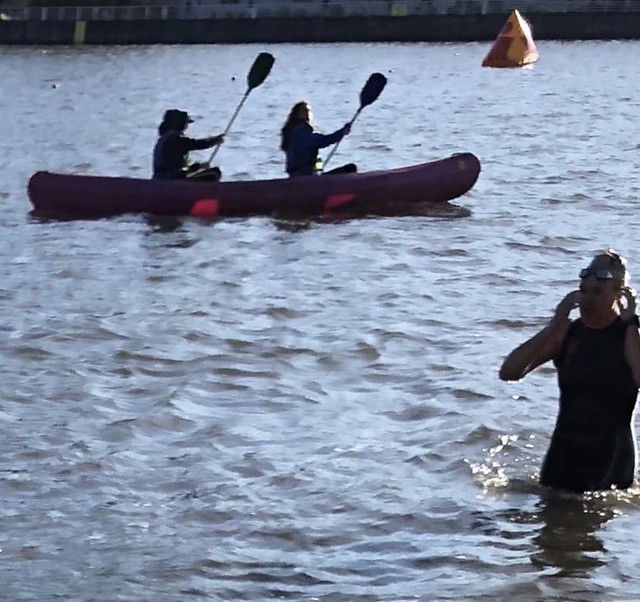 I exit, Australian style, see my Luca, note 45 minutes, and take a few second breather before re-entering the water. It was a rough swim out to the first turn buoy with the sun full glare now and warming the air temp so my goggles fogged up and even let a few drops of water in. Just keep swimming. Down the river (lake) I go, make the turn, and head in!! With orange buoys now and a higher sun, the glare was reduced. Phew!! I stayed on pace. It was frustrating to feel my 4,000 meter alert and realize I was still 500 meters out. But!!, at 4,000, I was at 90 minutes

So I was actually right on desired pace. 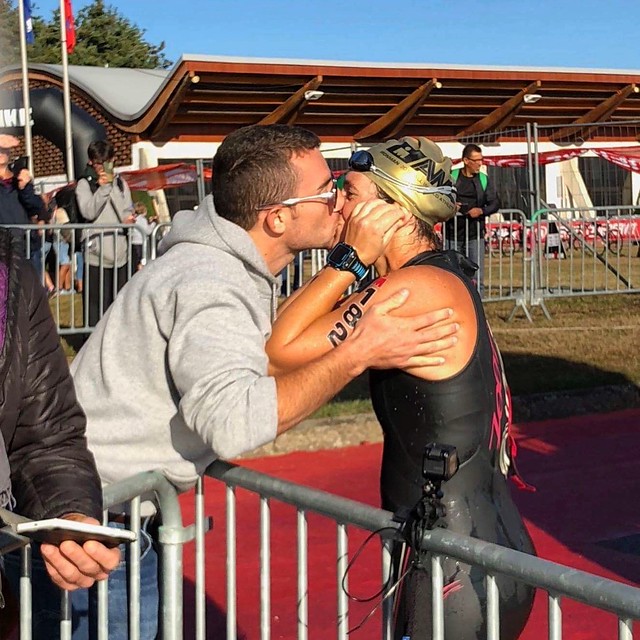 I’m out of the swim officially at 1:40. Woo!! I jog up the mat for my kisses and head in to transition.

T1: for the first time ever, I take my time. And yet, still made a great T time!!
I use my towel to dry, put my sleeves on, socks (it was chilly!!), lube up, helmet snapped, and shoot over to my bike. I spot my crew on my way out and set out for my 6 hour tour.
Transition was huge btw... Not so much the run in or out, just the area in general, it was a huge amount of space. .3 miles in 7:47

The Bike. The course was described as flat with a couple sections of hills (2 loops). Cool! I got that. They reported only 1,400 feet of elevation gain. They forgot to mention that that was PER loop. 2,800 feet of climbing is fine, but they should have been clear about that!! I would have included more climbing in my long bikes!! I was really upset about this throughout my bike.
The course WAS relatively flat but it was angled UPHILL! Seriously, look at my elevation profile! It was up the whole time!! I could not get any speed at all!! I felt powerless. Even the “downhills” were constant pedaling. The hilly sections were as indicated but the whole “flat course” description is bullshit!!

Despite, the bike course was absolutely beautiful! We went through a multitude of small French villages, countryside, farms, and even a thick forest. There were locals out and about cheering us on and even a huge MDOT made of hay bails along the course.

Ever since IM Netherlands I worry that I’ll unexpectedly go to that dark place again. Thank goodness, I didn’t!! I stayed pretty cheerful putting miles behind me. Even nutrition was solid ~ I started my nutrition 25 minutes in and settled in with waffles, fig newton's, and gu's.
I was pretty alone out there. I knew I was in the back of the pack with my long swim but I was pretty cool with it. I would pass a guy here and there and a guy would pass me every now and then. Plenty of support though and motorcycles making their rounds. I got a warning once after a guy passed me (not fast enough) but I showed the official I was currently eating and I think he realized I was clearly not drafting (eye roll) but just munching on a fig newton. 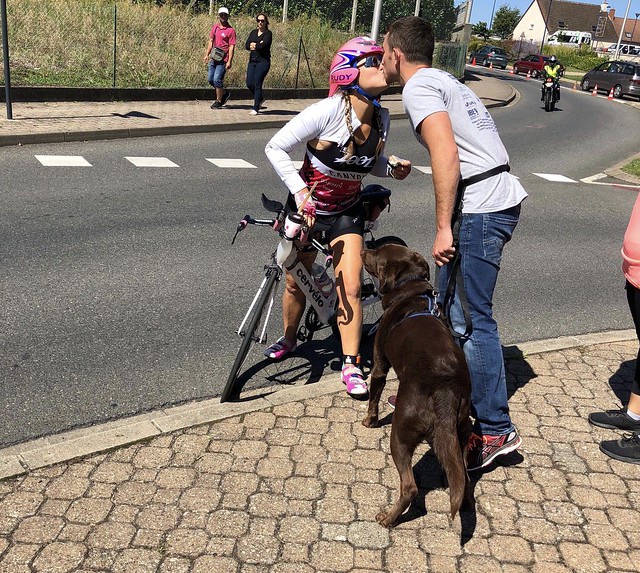 At about the half way point I was super happy to see Luca, mom, Alyssa, and Jake waiting for me. I pulled over and had a quick chat and “lunch”. Mom laughed because even on a 112 mile Ironman bike, I still gave a bite to my Jake. Ha!
And just after, a quick pee off the bike. That was at 3 hours and 30mins so I accepted that I would have a 7 hour bike. I felt faster on the second loop but I think I was slower on the hills so I balanced out and finished the bike in 7 hours flat. 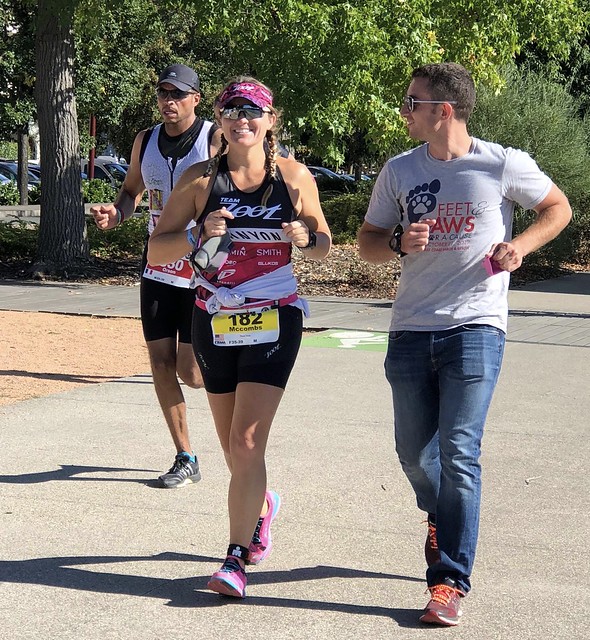 The Run. I really wanted under a 5 hour marathon. I get so aggravated that I’m not faster off the bike. I never have been. I swear I used to run 10 minute miles and now I’m lucky with an 11:30. Which is fine!! I’m not trying to win... I just mentally want to GO!

Remember a couple of months ago I tweaked my knee and had to take time off? Coming back I started 5min run + 30sec walk. It worked really well for me so I kept it up and made it my plan.

The course was 4 loops around the lake with two little sections in the downtown. It was AWESOME!! It was either a paved path or a hard packed, small gravel path (and some brick sidewalks downtown). Tons of spectators lined the course and volunteers were in plenty. Of course I had some mental ups and downs and even doubted I could do THREE more loops and then TWO more loops and then dang it, ONE more loop... but I knew I would finish.

The worst part about the run was the looping in the finish line. Not just around it or near it, we literally RAN the finish line carpet, the corral, all the music and celebration... and then ran right back out. It was a bit of a heartbreak each time.
The best part was Luca and mom appeared multiple times along the route, always surprising me in a new position. The last loop, Luca spent a lot more time with me keeping me moving to finish strong. 5 hours and 37 minutes later, my distance was reached... 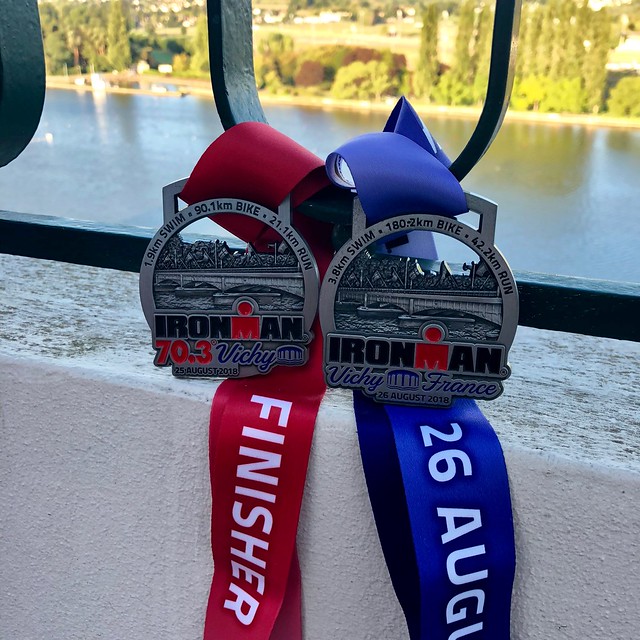 YOU ARE AN IRONMAN!! 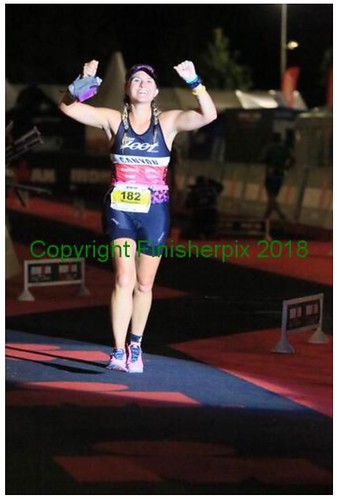 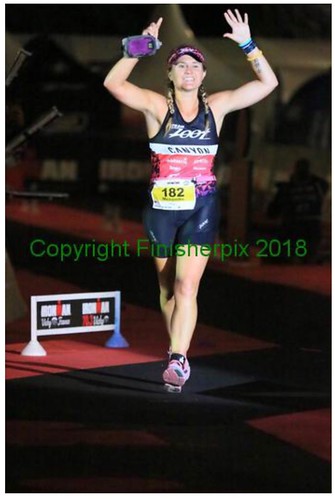 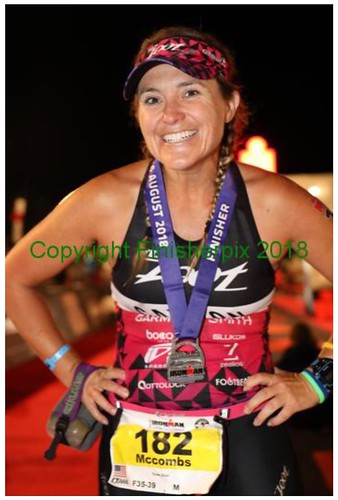 The overall for the day was a 14 hour and 32 minute Ironman. I was 16th in my age group (as if that matters) and 1,188 overall. The only thing I wish I would have done differently is stayed the extra day and spent Monday at the spa. Instead, we got in a packed car and drove hours to Switzerland and then Italy.

Ironman # 15 is done and as far as full Ironman go, I have one more in me, Kona. Mark my words (in pencil of course...) - Kona is and will be my last full Ironman. How many of you are laughing right now? Rolling your eyes? LOL...
We'll see.
Thank you always to my mom for being my biggest fan and best supporter ever in this world.
Thank you to my Luca for weeks and weeks of patience and understanding. His Sunday pasta after long bikes is truly the best in Italy. Your love is so unconditional.
Thank you Alyssa and Bob for traveling all this way and waiting patiently for our Greece vacation while we finish Ironman. And thank you to all my family and friends who follow along, send me cheers, and support this crazy journey to Kona.

Every Ironman teaches such a different lesson or changes my life in such a profound way. I think training for, traveling to, and even Ironman day taught me more about patience.
I'm not sure how to articulate this feeling/thought right now but ... patience. With  myself, with other people, with life working out how it's supposed too. And waiting for my day in Kona... patience.