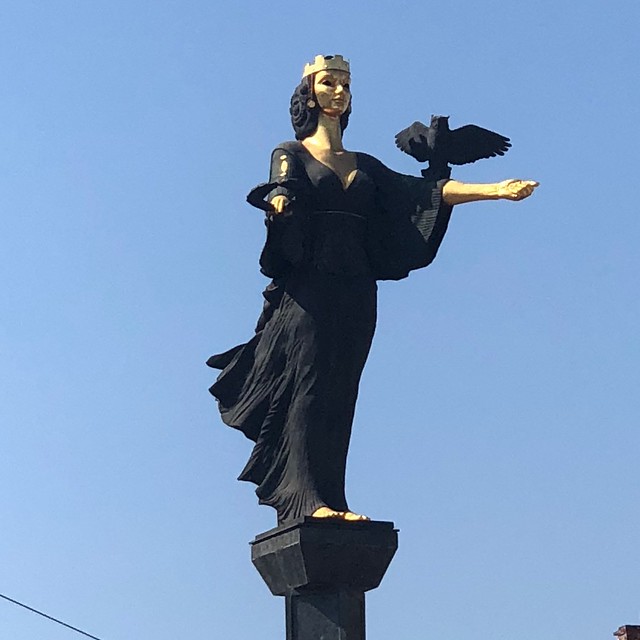 The capital and largest city of Bulgaria, we begin our journey in Sofia.
If you can imagine the most peculiar mix of flavors such as lemon, cocoa, garlic, sugar, salt, cinnamon, and say, oregano all <oddly> blended together but <surprisingly> tasting delicious, this is what Sofia is like.

Sunday, September 2, 2018
We arrived via flight from Athens on Sunday morning. We hopped on the metro and headed towards our AirBNB house. A bit too early to check in, we had our first taste of Bulgaria - banitsa. 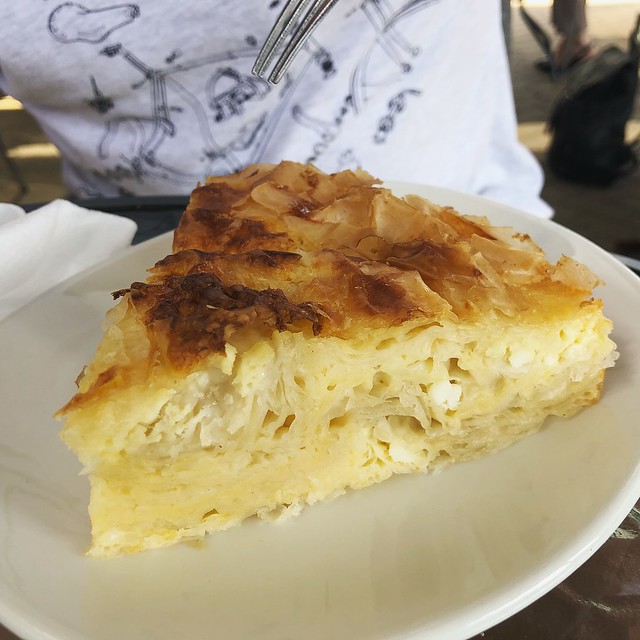 Banitsa is a traditional Bulgarian food in the börek family prepared by layering a mixture of whisked eggs and pieces of cheese between filo pastry and then baking it. So delicious and what a savory treat away from Italian breakfast sweets! Coupled w/iced espresso - I already know I'm in food heaven!
Another short walk led us to a pedestrian area full of bars, restaurants, and shops. After wondering for a bit, we decided a couple of Shumensko or in Bulgarian: Шуменско пиво beers were in order. 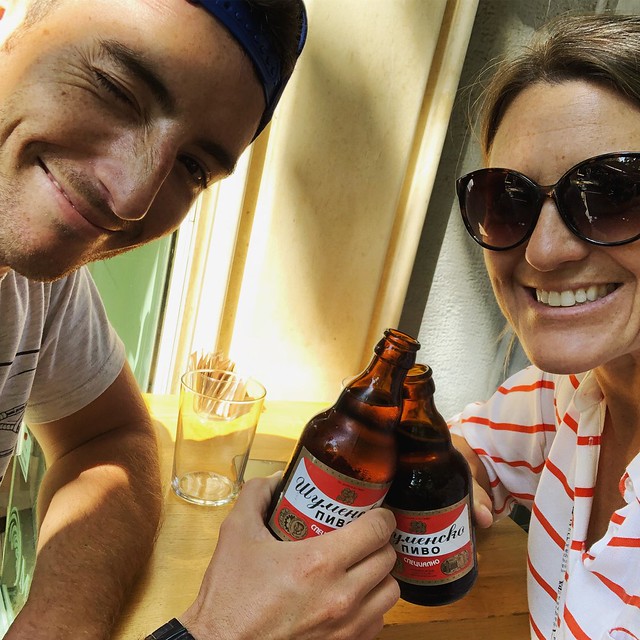 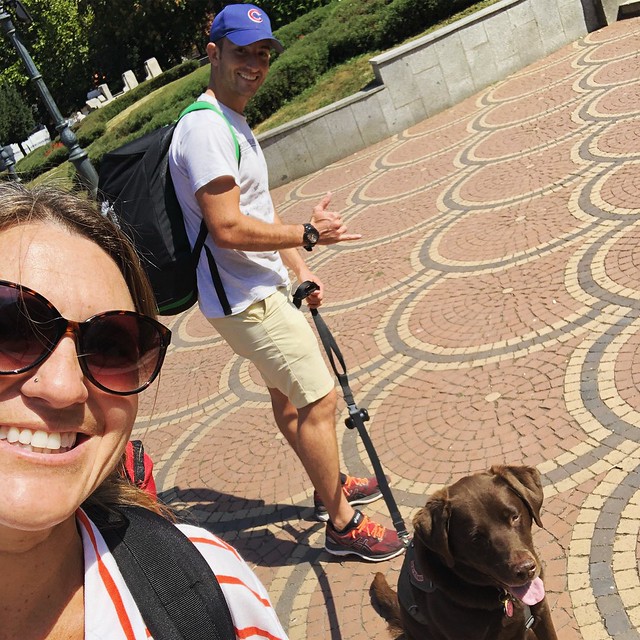 After dropping our bags, exploring our neighborhood, and finalizing our travel plans for Serbia, we headed to Sputnik, a cocktail bar for a few more beers, chatting with locals, and finally, dinner at Raketa. Dinner was fun. The menu was entirely Bulgarian so we told our waiter, order for us! What ever you would order for your own family, order for us! In no time we were loaded with traditional salad, bread and dipping sauces, meatballs, and later the most delectable desserts!! 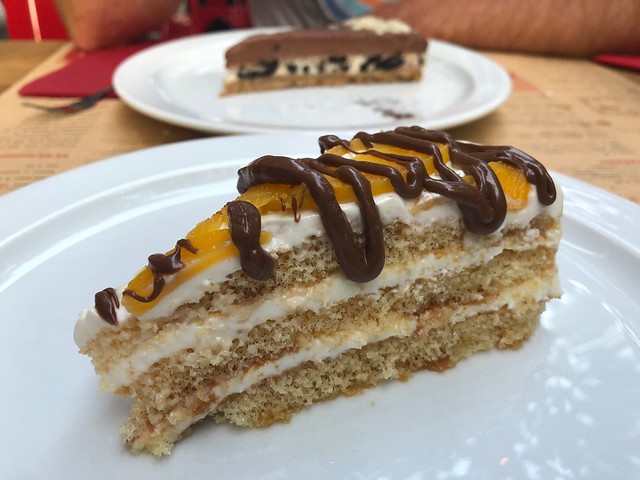 Oh and don't forget the multiple flavors of Rakia, the traditional drink of Bulgaria. It is a clear alcoholic beverage made by the distillation of fermented fruit - think Moonshine; it is POTENT!

Monday, September 3, 2018
Monday morning we were joined by our (hired) guide, Joy. An amazing tour!, Joy was full of history, humor, culture, and knowledge. Our adventure included: 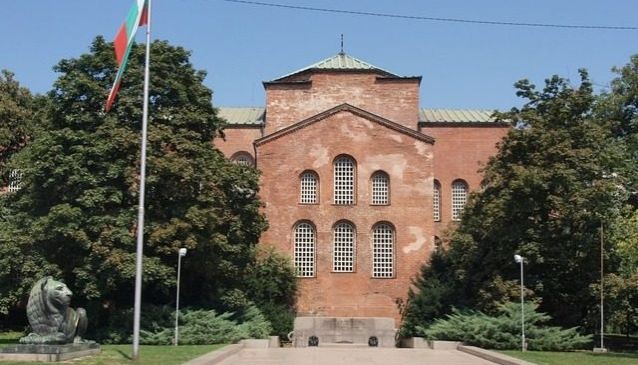 St. Sofia Church the second oldest church in Sofia dating back to the 4th-6th century (that's between 300 and 600 AD by the way). The church gave the name to the city which was previously called Sredets. 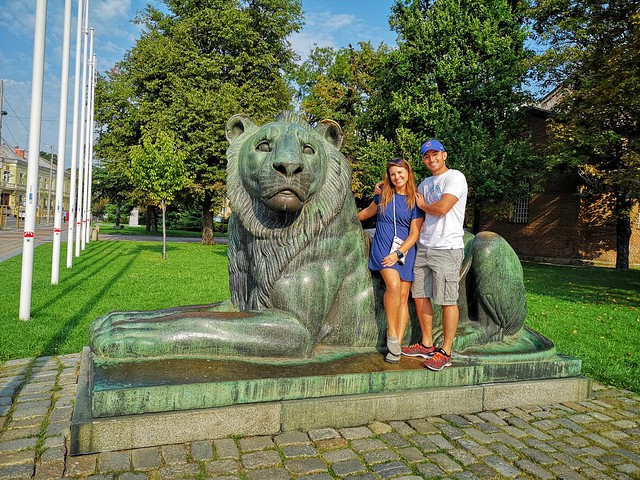 and the city's symbol, the lion 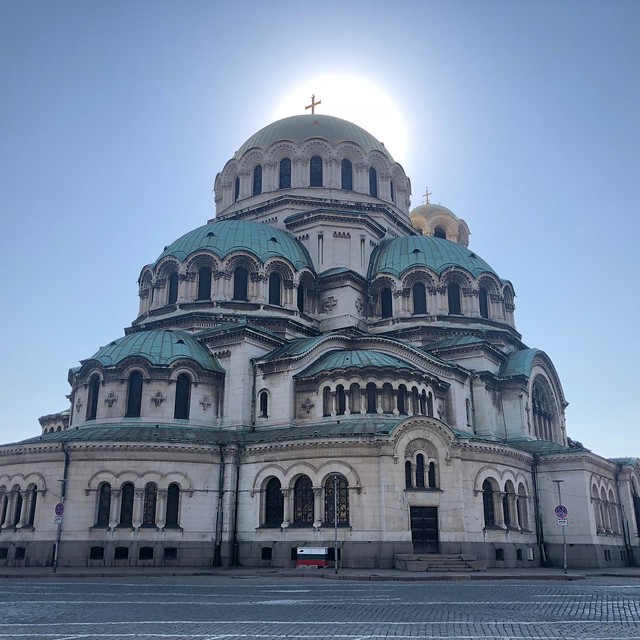 Cathedral Saint Alexander Nevski - a Bulgarian Orthodox cathedral. Built in Neo-Byzantine style, it serves as the cathedral church of the Patriarch of Bulgaria and it is one of the largest Eastern Orthodox cathedrals in the world, as well as one of Sofia's symbols and primary tourist attractions. It's big and gorgeous - inside and out!
The Orthodox religion is FASCINATING! 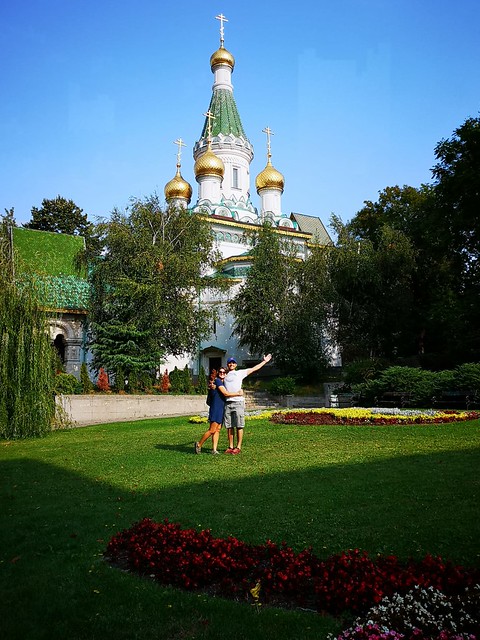 the Russian Church, or officially known as the Church of St Nicholas the Miracle-Maker, is a Russian Orthodox church (and the church where a service was taking place, read below). 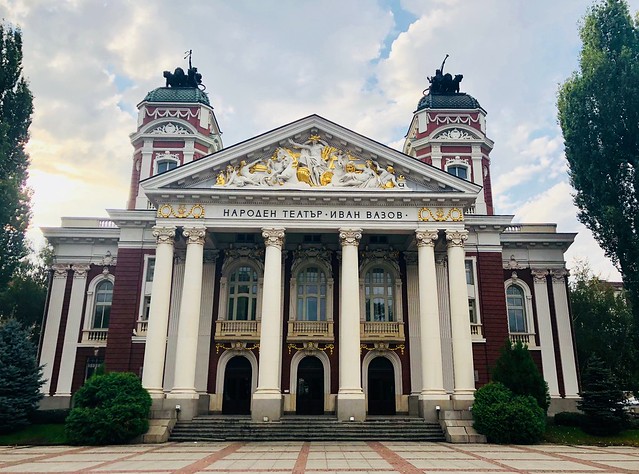 Ivan Vazov National Theater - founded in 1904 it is the oldest and most authoritative theatre in the country. Vazov's play, "The Outcasts" was the first to be performed at the theatre when it opened.

Vitosha Boulevard - a main commercial street w/posh stores, restaurants and bars.
Central Mineral Baths - now a museum, previously public baths thanks to the natural springs (hot and cold!!) that run under them.
Statue of Sveta Sofia (pictured above)
Serdica and the ancient ruins of Thracians and Roman times. 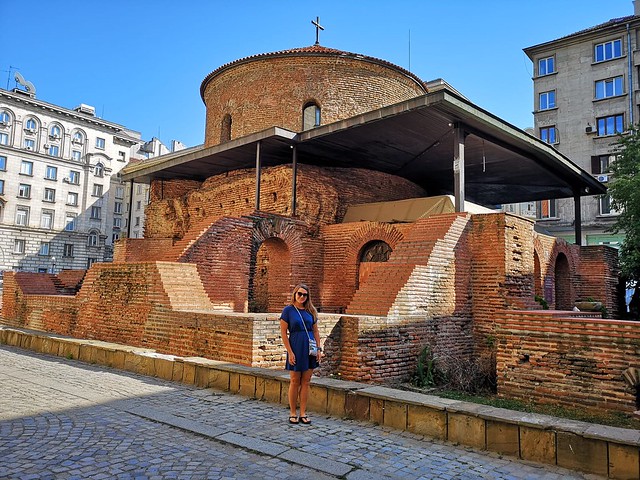 Saint George’s Rotunda - the oldest building in Sofia, 4th century. The building is famous for the 12th, 13th, and 14th century frescoes inside the central dome. Three layers of frescoes have been discovered, the earliest dating back to the 10th century. Magnificent frescoes of 22 prophets over 2 metres tall crown the dome. Painted over during the Ottoman period, when the building was used as a mosque, these frescoes were only uncovered and restored in the 20th century.

The Synagogue and Banya Bashi Mosque. The neatest part (IMO) about the religion in Sofia is on one corner, one single corner, you have Catholic, Orthodox, Jewish, and Muslim prayer going on. 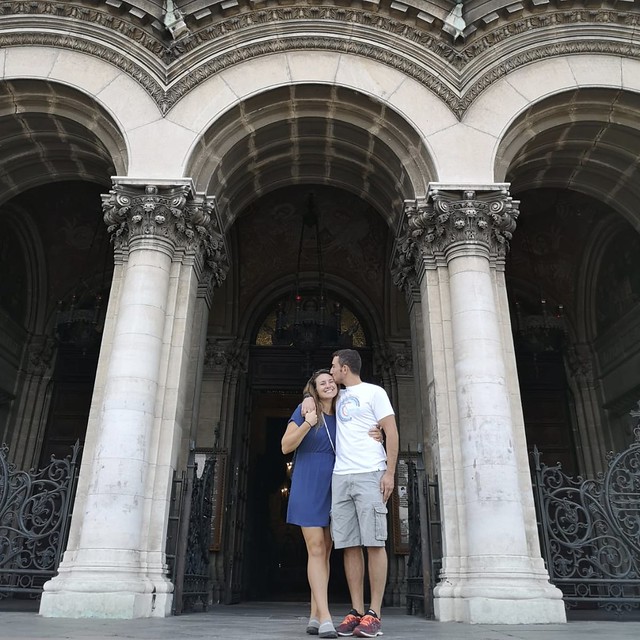 Sofia is one of Europe’s most ancient capitals. Originally established by the Thracians, it was later an important city of the Roman Empire; Emperor Constantine famously referred to it as “My Rome”.
We had two very special encounters in Sofia. A service was being held at one of the Orthodox church in the crypt so not only did we get to include our wishes like the natives, we witnessed part of a 3 hour singing service! 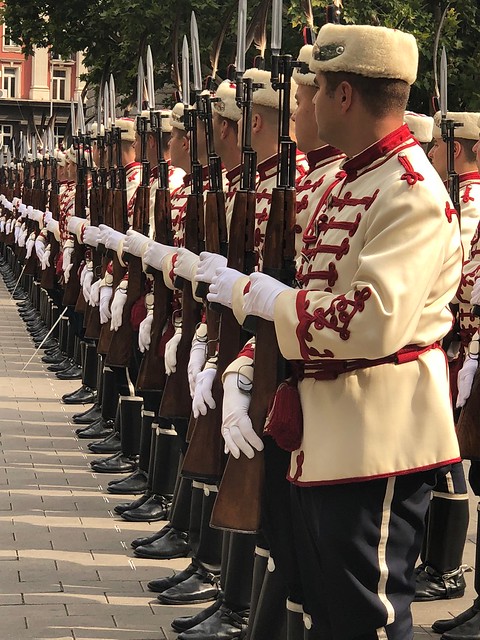 And later, passing by the political buildings, the President's guards were performing a welcoming ceremony of an official. Resembling an Army company, a group of Soldiers stood in traditional uniform, the band playing, and marching. My favorite part was the group (in unison) shifting weight from left to right every few minutes. Joy told us it is a real privilege to be one of the President's guards. Very cool!

Sofia felt really special to me. Instead of a tourist, I felt like a guest experiencing Bulgarian life. Instead of a destination, it felt like a home. The mix of history and prospect both took me back to an ancient time and excited me for a bright future. A very laid back atmosphere with a real eclectic style and exotic feel...

Tuesday, September 4, 2018
Even though we considered an extra day in Sofia to relax at one of the mountain spas, Tuesday was go time... A train would take us to Belgrade, Serbia. A 9 hour train. 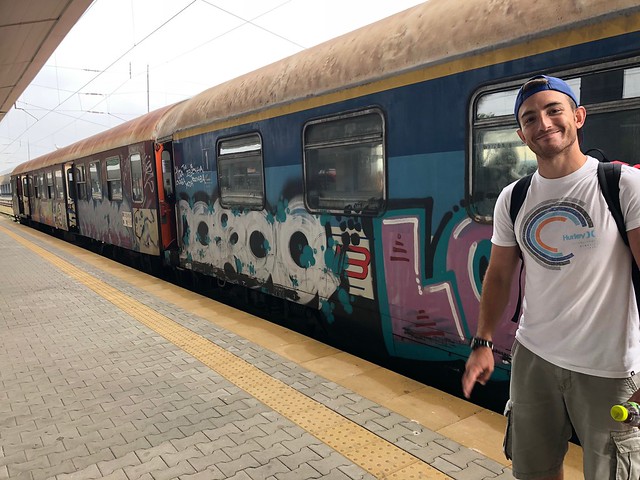 A 9 hour Bulgarian/Serbian train!! :O
We boarded the 3 car, graffiti'd train w/a variety of other backpackers. It was top 10 one of the worst days of my life. Kidding but not kidding. The train went terribly slow and would stop for no reason!! At one point, the driver stopped to use the toilet and smoke a cigarette. Border patrol, police, and train staff checked our passports and tickets at least 20 times, and Jake was questioned at every turn.

Guys, Sofia to Belgrade is a 4 hour drive. It took us 11+ hours by train. Jogging might have been a better option!! An obnoxious adventure...we laughed...screamed...and made it to (I'd like to say 'beautiful' here but it's more like QUESTIONABLE) Belgrade, Serbia. We were actually dropped just outside of the city because apparently Central Station is no longer open. Uhmmm, so what do we do!? Long story (and where the screaming took place) short, we stumbled our way on to a tram which delivered us downtown just blocks from our AirBNB. 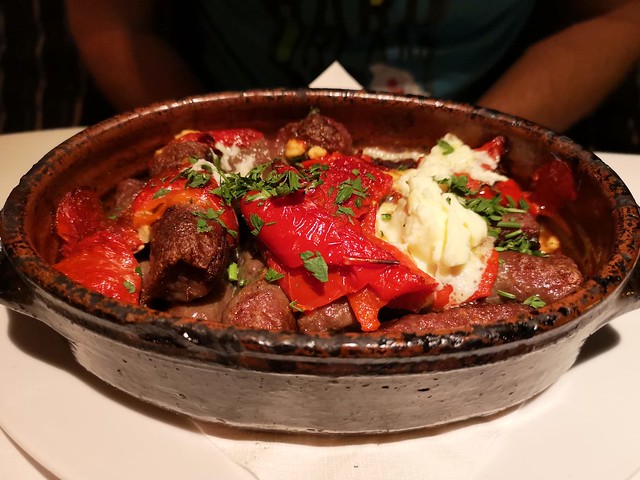 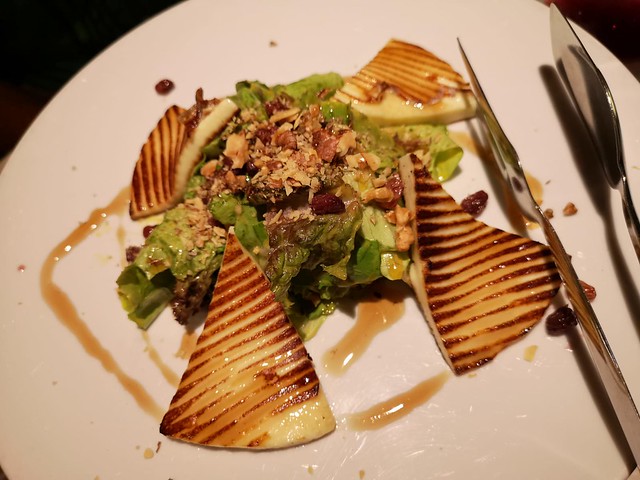 A late evening arrival, our host recommended 'At the Corner' for dinner and we showered off our train grime and beelined to food and wine. The restaurant was FANTASTIC. The chaos of the city was tightly sealed outside and inside a French motif, romantic music, Serbian eats and wine, and mirrored ceilings filled our souls. Our bellies instead were filled with traditional Serbian meats, grilled cheese, and salad. 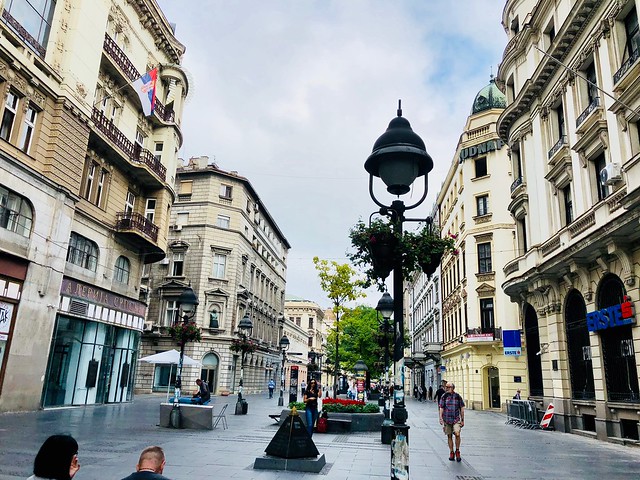 Wednesday, September 5, 2018
Wednesday morning. We did not book a tour for today so we made our own. We searched all the spots and mapped out a plan (no public wifi nor service here BTW, we aren't in Europe anymore)... and set out in the a.m. w/Jake. 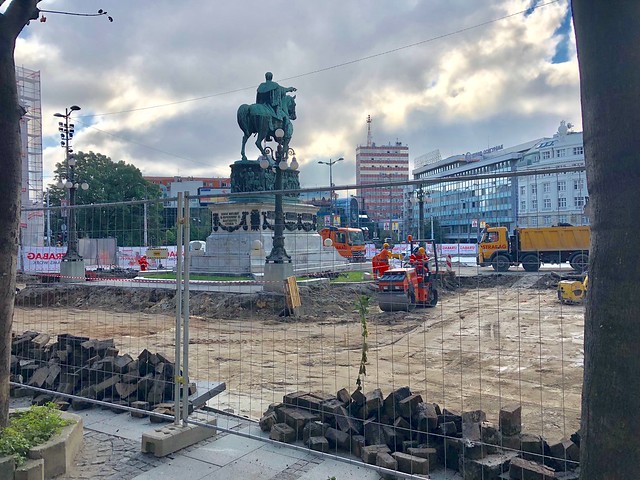 Republic Square (which ended up being under construction) 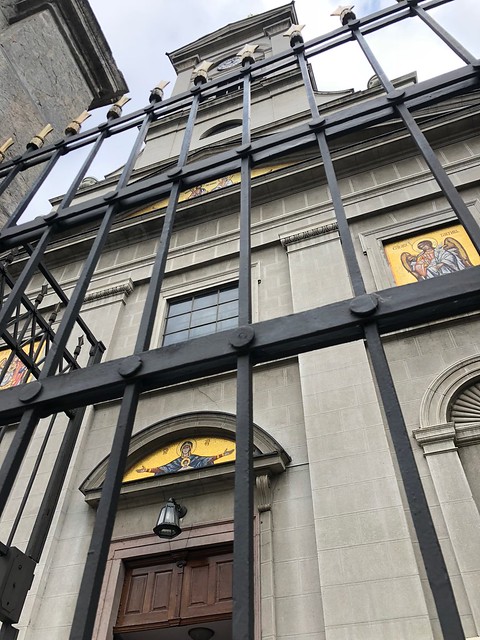 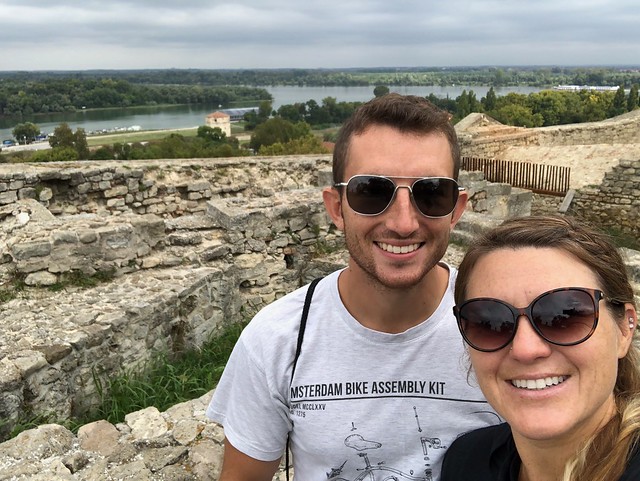 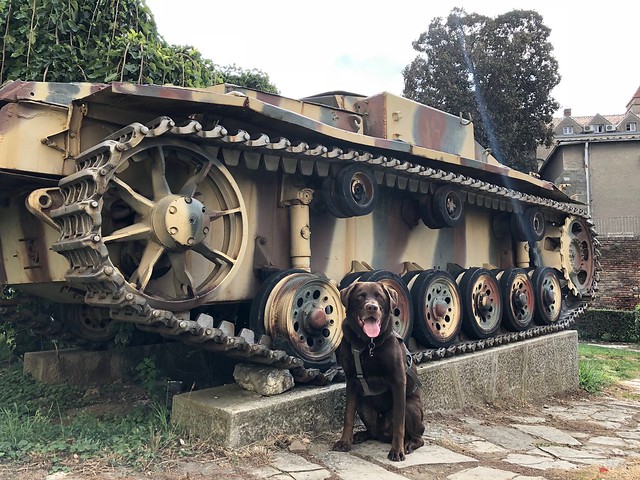 Kalemegdan Park which included the Belgrade Fortress, military museum, The Victor, and incredible views of the Sava and Danube Rivers. 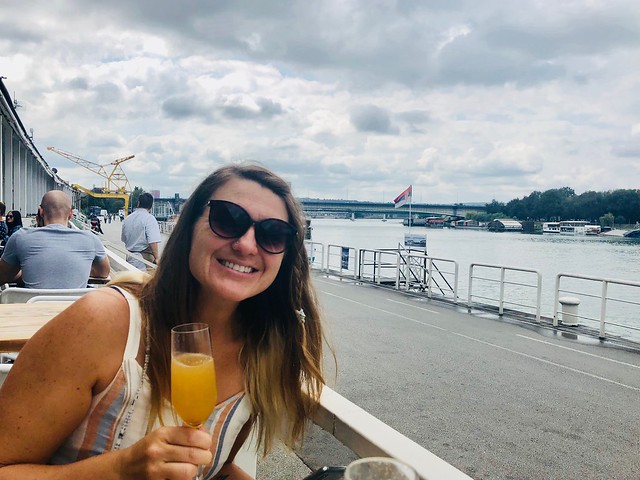 After, lunch at Ambar in the Beton Hala (amazing assortment of eats. So much and so good that we later skipped dinner even!) we dropped Jake off for a nap and continued on for the p.m. part of our tour: 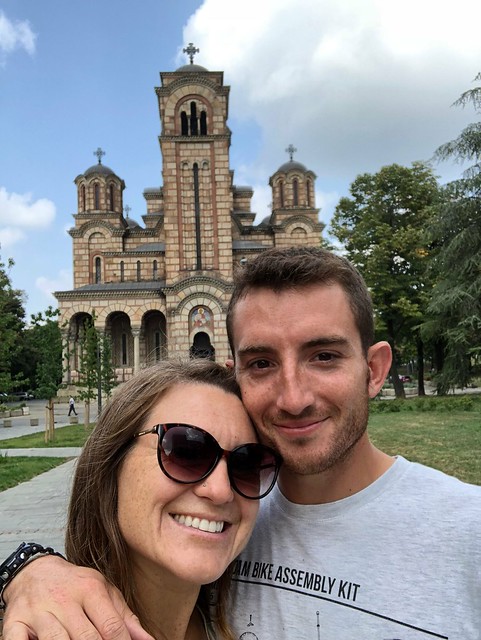 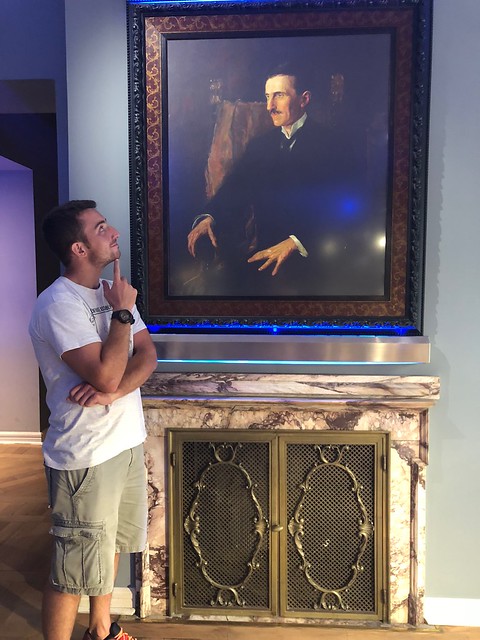 Nikola Tesla Museum. Nikola was was a Serbian American inventor, electrical engineer, mechanical engineer, physicist, and futurist who is best known for his contributions to the design of the modern alternating current (AC) electricity supply system. The man was an absolute genius and coming up w/futuristic ideas that were far beyond the time! 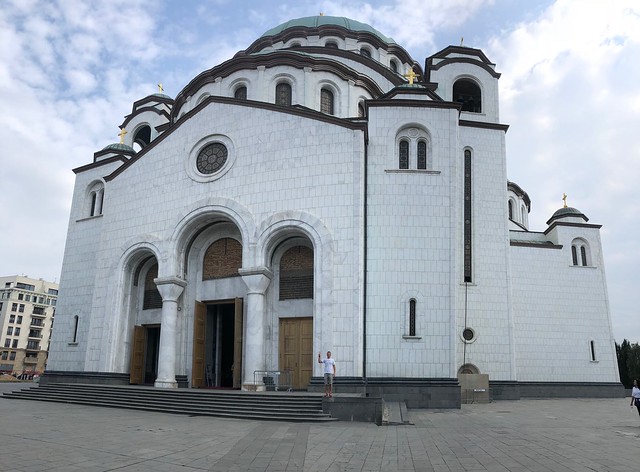 and the Temple of Saint Sava (which was also under construction).

We finished off our tour w/famous ice cream shop, Moritz Eis for some unique flavors like Polenta (we tried but didn't buy) and Carrot Cinnamon ~ seriously it tasted like frozen Thanksgiving in a cup! And Luca had Dark Chocolate w/Lemon Mint. 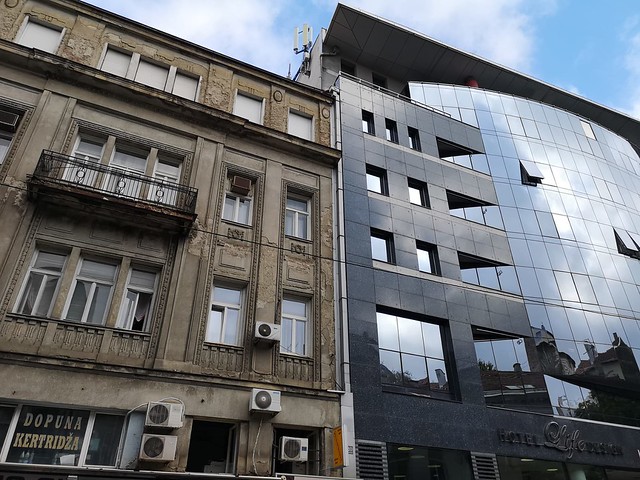 Our impression of Belgrade is as contrasting as the city itself. The beautiful parks and delicious food mostly make up for the chaos and derelicts of the city and residents. We were not welcomed to the city as you might expect being welcomed to a European capital but we found our way through the mess. Buildings from the 19th century (and earlier ??) stand proudly next to modern construction.
Ruins from wars and bombings remain as a reminder of the struggle this city has faced while around the corner, a new city in development. 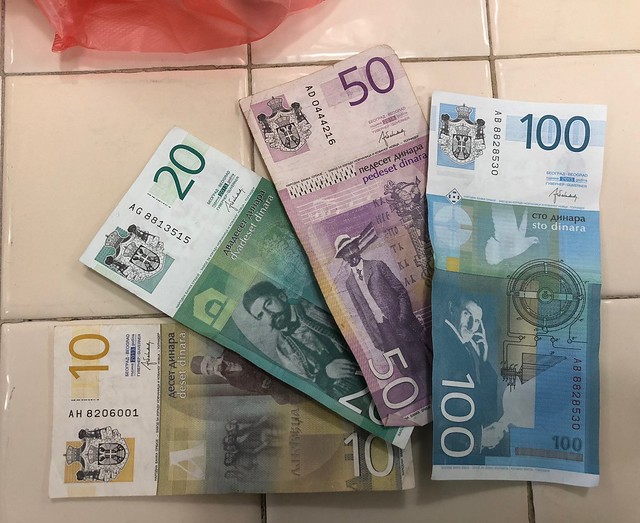 Strong tradition, religion, and oppression face liberation, McDonald's, and technology. Young and old, poor and rich. The sky, the streets, the people... all filled w/a stormy temperament - quickly changing moods and quick to offer the best of the city... and the worst. 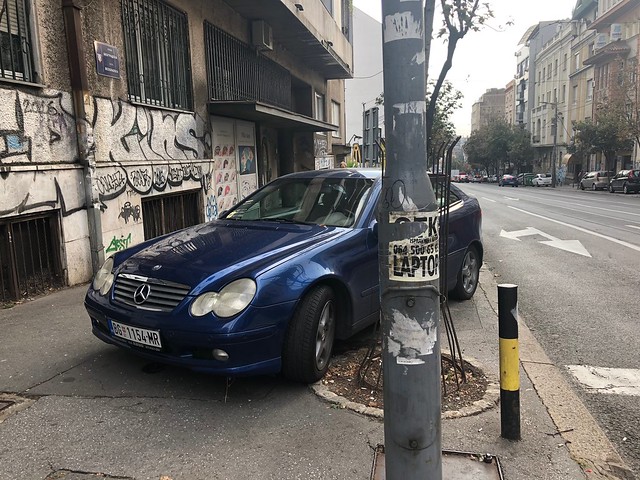 In one photograph, the past, the present, and the future can all be seen. A firm fist, a friendly handshake, and a unique caress of intrigue. In all honesty we arrived with bitter hope, we were greeted with strife, and we depart with strong desire to go. Please, park where you like, we are Belgrade'd out!