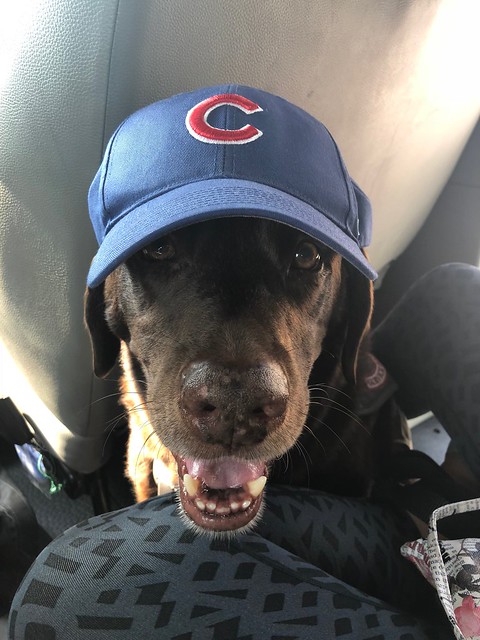 Thursday, September 6, 2018
After our obnoxious train ride from Sofia to Belgrade we decided to take a private van to Budapest. Our AirBNB host recommended a company. It cost only 25 euro per person and they were happy to take us along. Arriving at our door first thing Thursday morning, we secured our spots in the van (minimizing my car sickness troubles w/front row middle seat), briefed Jake, and met our driver Nikola. We were joined by an Australian dude on a 4 month European tour, 2 local dudes, 2 local gals, and a lady from Brazil that didn't speak one word the entire 5 hour drive. It was a little bit of a scary ride but went fast and we made plenty of potty stops. Plus we were dropped off right at our AirBNB... 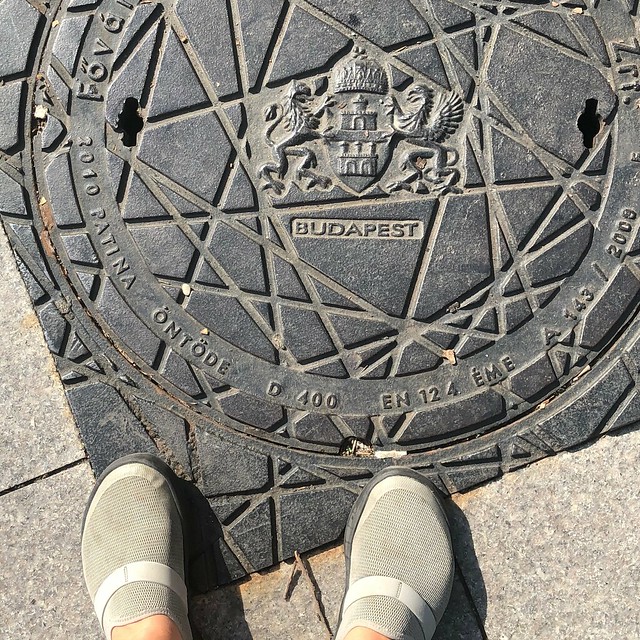 Welcome to Budapest.
And what a welcome! Our host have to be the kindest most thorough, awesome hosts on all of AirBNB. Seriously guys, they spent time with us with a map telling us exactly where to go, what to eat, must see and must do. The gal even gave us a gift of glass jewelry bracelets that she makes herself. We were crazy impressed and excited to dive in to Hungarian culture.

We were ready for initial exploration, cold beers, and later dinner. We walked the Jewish district stumbling upon one of the most popular/famous ruin bars, Szimpla Kert. Ruin bars started as a way to use dilapidated buildings and unused outdoor spaces to drink cheap beer and socialize. Most of them are quirky, funky, colorful... eccentric. Take a look:

(p.s. this video is from early Friday morning. The place was PACKED Thursday night. In fact, this whole district is PACKED every night!! And it's hopping until 4 and 5am!!). 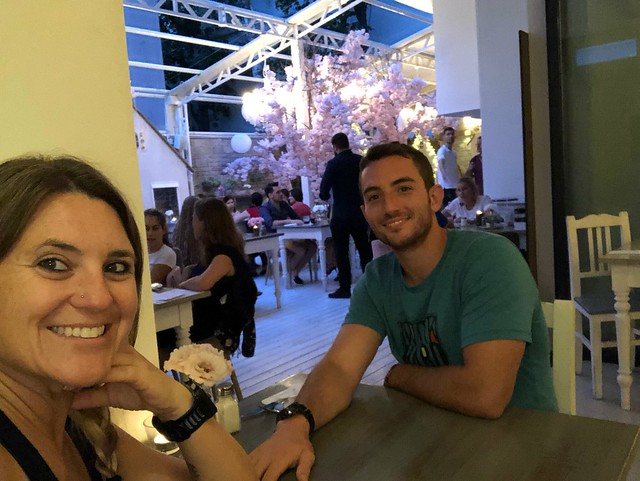 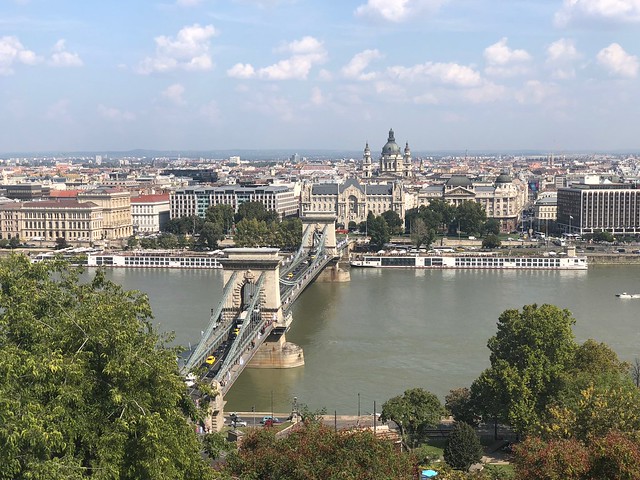 Friday, September 7, 2018
With only a few short days in Budapest, we opted for a 90min "kick start" tour this morning. The guide was supposed to show us some of the main attractions and most important places. He didn't really... right from the beginning he asked us what we wanted to see. We were like uhh, dude, this is your country (which it actually wasn't, he was from Romania), you tell US what we need to see.
He was a great architectural guide though and well versed in the culture, history, and the political standing of the country.


Budapest has some of the most interesting architecture. It's a hodge podge of Roman, Gothic, Neo-Gothic, Renaissance, Neo-Renaissance, Ottoman (Turkish), Baroque & Neo-Baroque, Classicism & Neo-Classicism, Romantic Style, and Art Nouveau. It's fascinating! And the modern construction taking place adds even more intrigue.

So anyway, the guide did an excellent job from an architectural standpoint, pointing out the various styles, but he failed to show us any places of touring interest. When we left him, at least we knew where we were going and why...

We also decided that grabbing a bike would get us where we needed to go faster. Budapest is huge in case you didn't know. So we got a tandem!

Sites to mention:
Dohány Street Synagogue - built between 1854 and 1859 it is largest Synagogue in Europe. The complex consists of the Great Synagogue, the Heroes' Temple, the graveyard, the Memorial and the Jewish Museum, which was built on the site on which Theodor Herzl's house of birth stood. 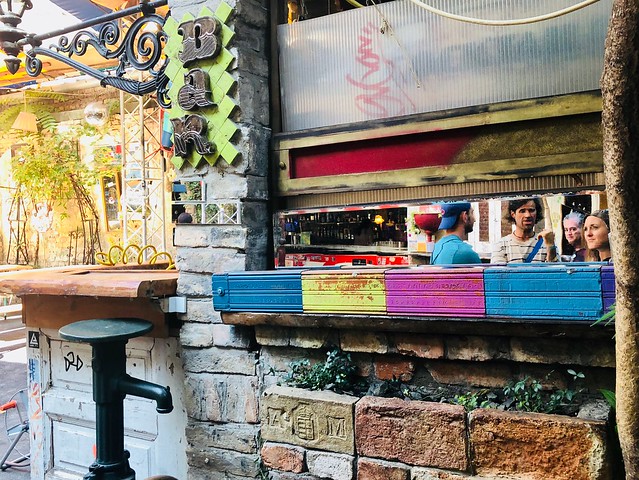 
Chain Bridge and Mathias Church
Elizabeth Bridge (pictured in the photo above "Friday...") 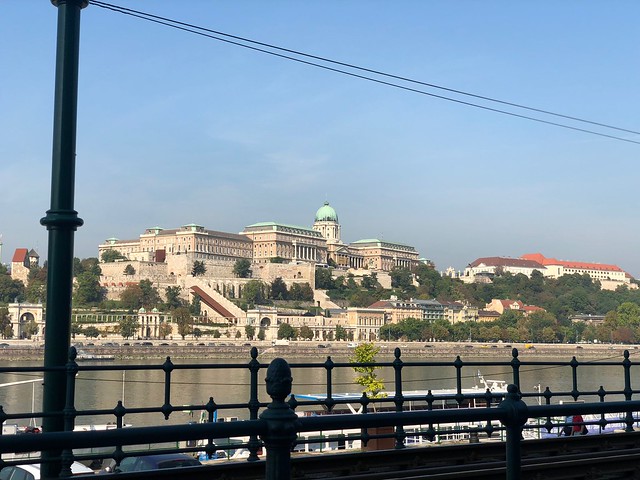 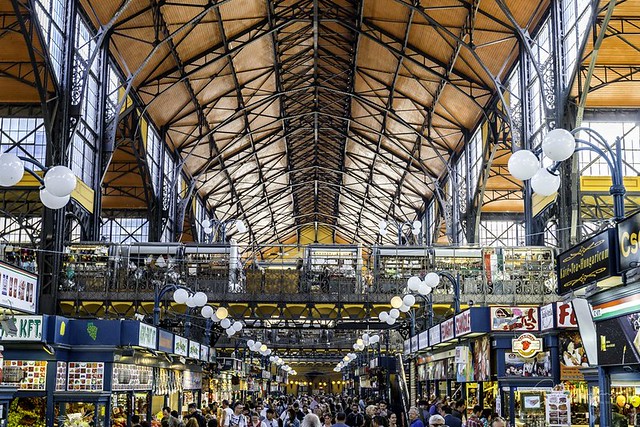 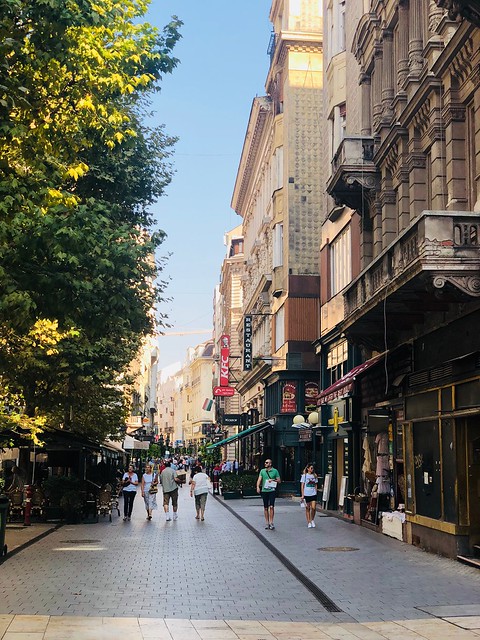 Váci Street - a collection of shops, restaurants, and bars. And yes, a KFC! 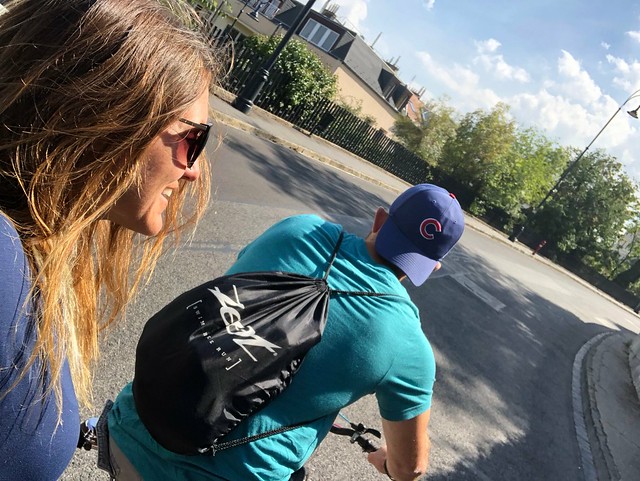 The tandem started out fun and silly but we quickly realized that Budapest is not so bike friendly. It wants to be! But "bike lanes" end suddenly into sidewalks or in to one way roads. We were very confused about where exactly we should be riding. We were either battling pedestrians or vehicles. Despite, we got to Buda quickly, climbed the brick mountain, explored Castle Hill and got back to Pest. p.s. Budapest was originally two cities: Buda and Pest w/the river running between them. They united in 1873 following the Battle of Mohács. 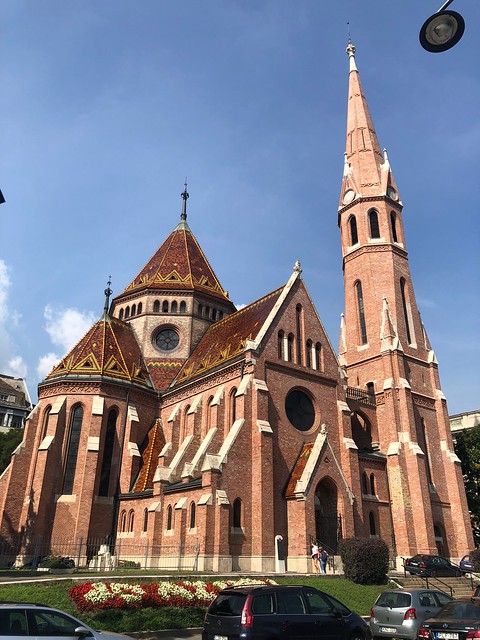 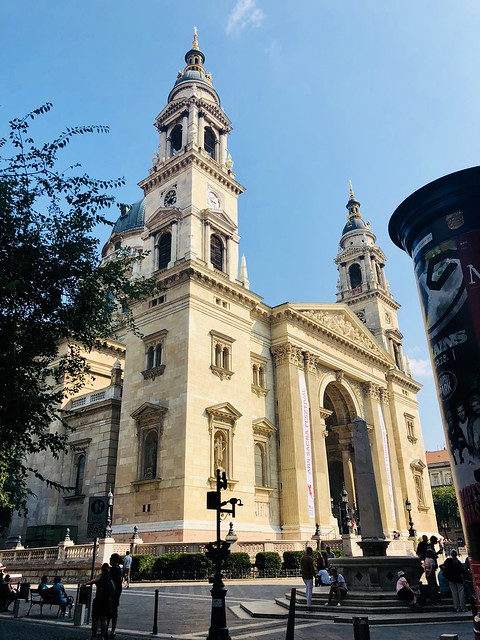 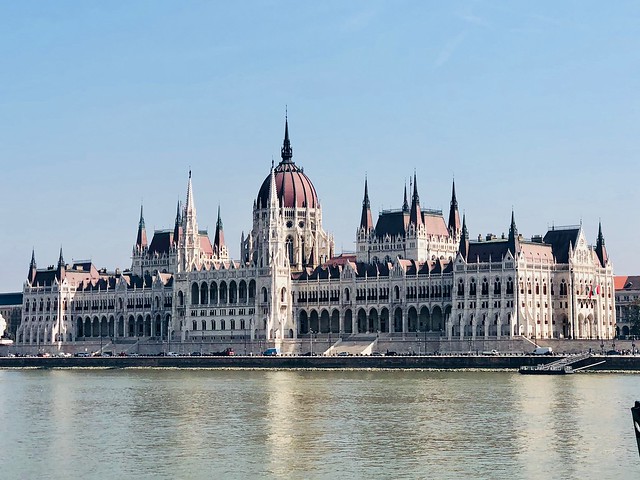 Hungarian Parliament - think they overdid a bit? HA!
Our Friday exploration ended w/dinner at Macesz Bistro for some authentic kosher Jewish cuisine. Felt so good to be eating so clean!

Saturday, September 8, 2018 morning began with a walk down Andrássy Street (not pictured, but we think we saw a movie being filmed!!). The street dates back to the 1800's and has become the home of many embassy's. 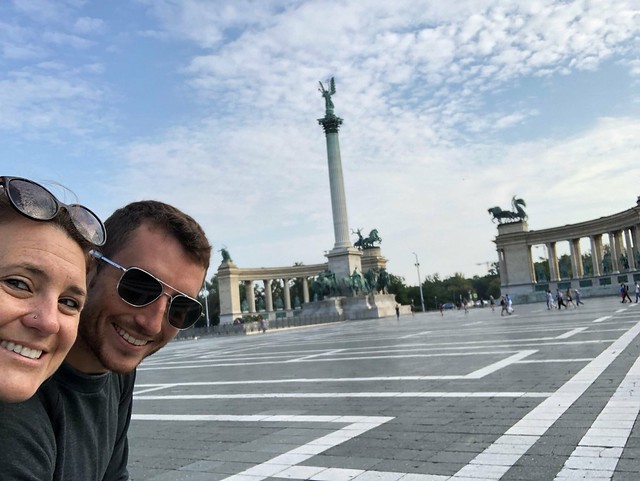 Heroes Square and Hősök mark the end of the street and the beginning of City Park. Where we will start our day at the spa... 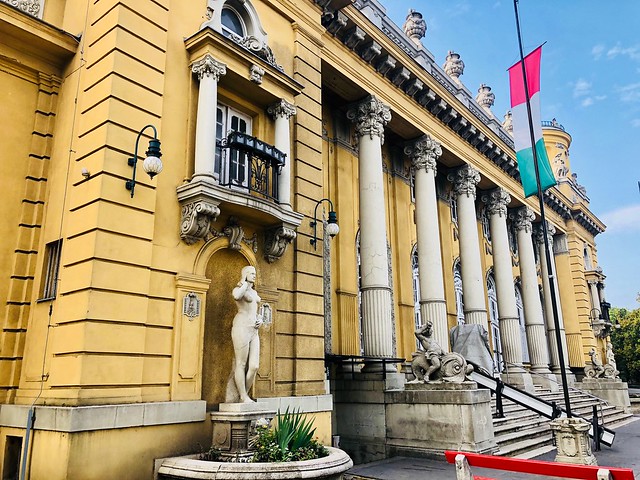 Széchenyi thermal bath features 18 pools, massage, saunas, and even a beer spa. What is more, it is one of the biggest natural hot spring spa baths in Europe and Szechenyi Bath is 105 years old! Whoa!
We had a couples 45min massage before exploring every single pool the bath offered. LOL. And later, Luca had his very first pedicure. 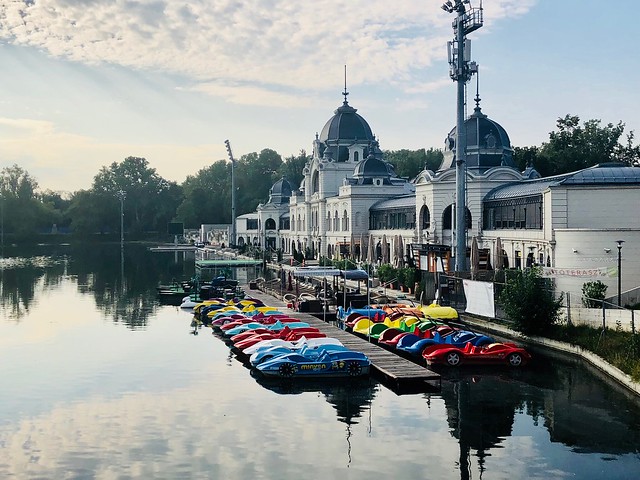 After all the pampering, a walk around City Park w/lunch (the giant cheeseburgers from Instagram!), 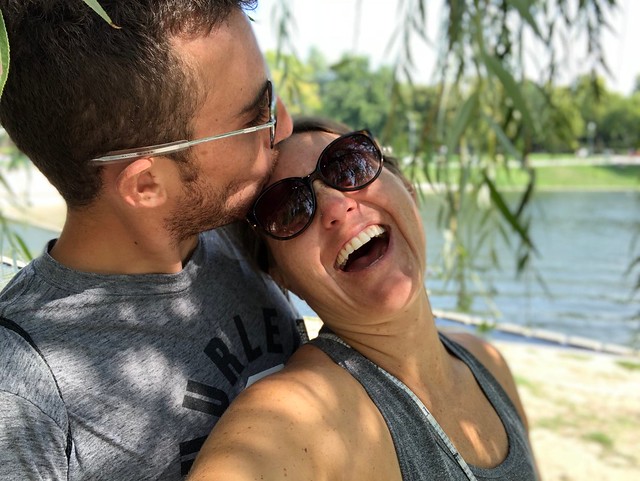 silly kisses, and later the infamous metro (not pictured) to get back downtown.

We returned to the ruin bar for a beer and came upon Freestyle artists - which was super cool. They were making music, beats, and rhymes right there on the spot w/style suggestions from the crowd. It was was super fun. We spent the rest of Saturday exploring more locally and visiting some shops. We actually ended up buying a frozen pizza and having an early night to prepare for our 4am return.

Our overall impression of Budapest, Hungary is that it's eclectic, bustling, and has so much to discover - a real treasure trove! It's really so much bigger than I imagined and quite more modern than I envisioned. And I had no idea that it was two cities turned to one - Buda and Pest (which is actually pronounced "Pesht").

There's a very modern, hip vibe in the city but sad reminders of their past and devastating history. The people, not much different - a variety of aged locals, young travelers, and hipsters. Stern faces seem to show the suppression of the previous Soviet rule but a strong beer quickly loosens the smiles and opens their hearts...

There's an unpleasant amount of trash, dog poop, vomit, and disgust in the streets and walls are littered with graffiti. HOWEVER, up early and you will find a city full of street cleaning and trash crew. Within a couple hours though, boozers are circulating. I mean, the beer is cheaper than the water! Seriously. I paid 80 cents once for two big beers.

Equally recognized for its culture, cuisine and vibrant nightlife, the city truly has a little bit of everything for everyone!