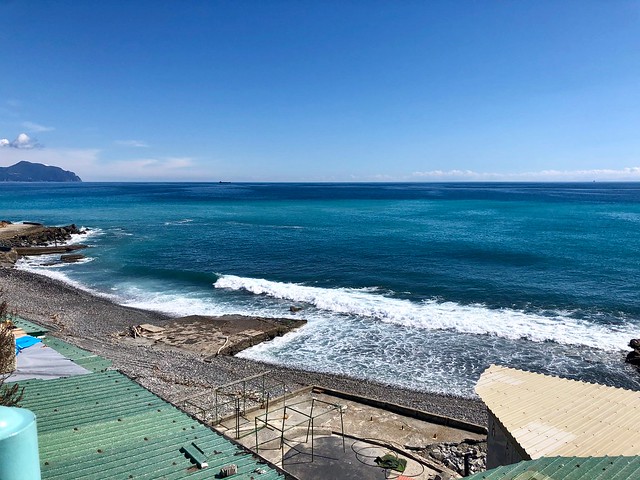 Monday, April 8, 2019 - I'm better today right?! Not feeling 100% but my energy is back, so I'm going to go swim. My chest is heavy, a deep achy cough...but all good. I'm in the pool earlier than my usual Monday swim because we have an appointment in Genova this afternoon.
The pool was crowded but I thought 'I can slip in and these people will be done soon!'
So crowded. Too crowded. I entered a lane w/4 others. Maybe 5. I don't know, everyone was all tangled up together. After 750m, about 75 of which I had to stop swimming and WALK, I couldn't take it anymore and got out. Everyone was backstroking and/or kicking.
What. The. For Real. Fuck. What a waste.
It set the stage for a very aggravated day. Not to mention; I really DON'T feel well.
Anyway. Good news from Genova - I'll explain later. And Genova is quite beautiful! It's seaside and super happening. A little too "bustle" for me, but great for exploration (which we did little of, we were here for doctors). But definitely worth a deeper day of adventure!
SWIM 750m

Tuesday, April 9 - between Luca coughing all night and me coughing all night, I'm not sure I slept for longer than an hour at a time. I have so much work to catch up on today though and a 1:25 bike...
As the day unfolded, so did my cough. By bedtime I was aching and hacking and shivering and UGH, why am I still sick?
SICK DAY

Wednesday, April 10 - woke up the sickest this morning. And insisted I needed 911. Not really... But I did go to Luca's doctor and beg him to see me. Which he did. And decided I (we - because Luca gave me this crud!) have an infection and gave me some antibiotics. So, hopefully this goes soon. But still, more rest. And even though I'm peeling my skin off bored, I'm resting. And by resting, I mean curled up on the couch WORKING <-- still catching up.
SICK DAY

I hate being sick the most because it feels like it's going to last forever, right? Like, this is my life now.

Thursday, April 11 - still feeling it deep in my chest but I couldn't do nothing any longer! I jumped on the trainer for an hour - just a steady ride but did my intensity pyramid.
BIKE (trainer) 1 hour

Friday, April 12 - to swim or not to swim, that is the question! The deep fire in my chest said NOT! The good news is, Luca's Easter leave began. So hopefully this yuck is on it's way out the door and we can enjoy our week (and especially our NEXT weekend).
SICK DAY

Saturday, April 13 - despite the deep cough, I had the energy and ... tenacity ?? to get my long bike in. We made a plan and I was out the door by 7. I biked to Livorno where Luca met me with the car (50 miles on the dot!). We had an incredible American breakfast at a little diner, some mozzarella sticks, and again, despite the coughing, I feel SO much better. 1 mile brick run (that damn near killed me!) after. Lisa musts: all rides are outside unless raining, 1 mile brick runs post every bike. Commit!!
BIKE 3 hours, RUN 1 mile

Sunday, April 14 - a very quick Milan lunch w/Luca's family.
WALK (w/Jake - 30mins) I'm not quite ready to run run yet. Next week though!

What a busted week. We have a full week of adventure and training planned for Luca's week off though. Hopefully this cough continues to dissipate and on with the show!! Just a few more weeks until my first tri of the year. Woo! (damn I miss ALLLLL the tri's in the states!!).