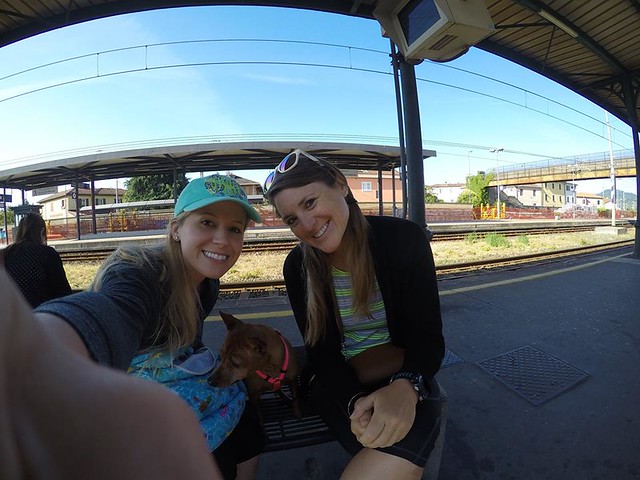 We are a 50 minute train ride to beautiful magical Pisa!!! With a down training day I absolutely HAD to go and invited my new friend Danielle along. I had already laid out the adventure: Pisa in a Day. We packed our bags and with tourist cameras in hand, we're OFF...

Pisa in a Day 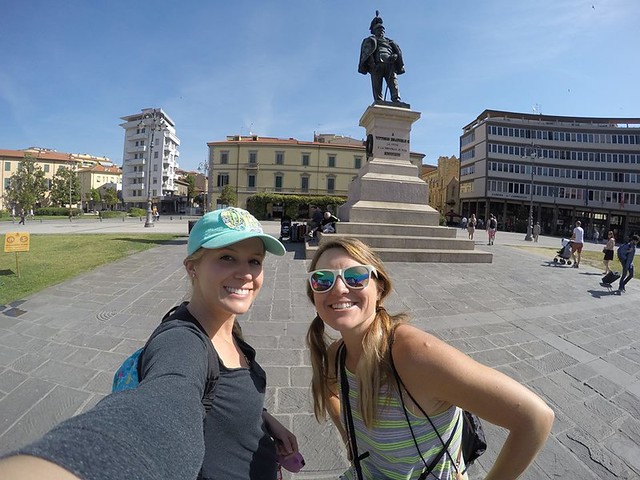 Immediately off the train, we encounter the first big square, Piazza Vittorio Emanuele II and the Lungarno Galilei. I don't have any awesome historical information about this square but I do know that it was recently restored and has quickly become a meeting point for locals and tourists. Tons of cafes, and quick stop shops surround the square. 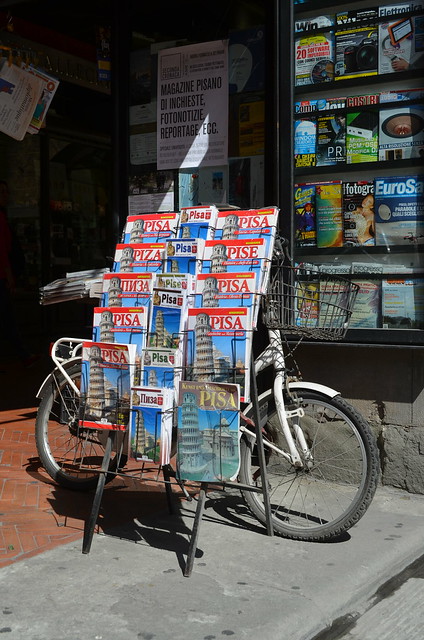 We take a few photos and continue down Corsa Italia. This street is the main venue for shopping. 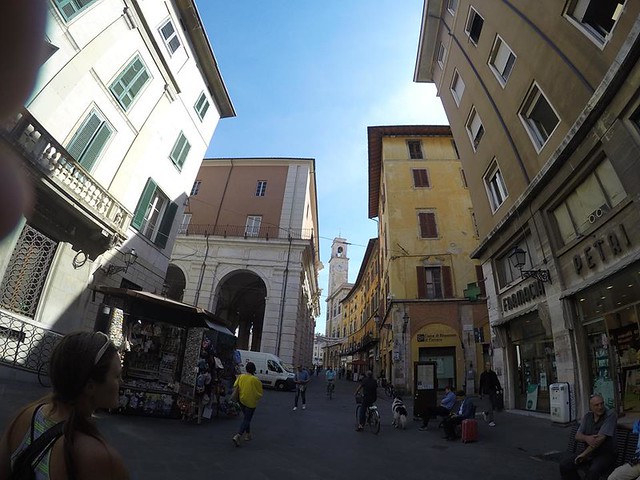 At the end of this street, there is the “Logge dei Banchi“, a loggia by the architect Bernardo Buontalenti. A loggia is a gallery or room with one or more open sides.
We can also see the clock tower ~ a famously photographed landmark as well.

We also took a little detour "off the beaten path" to find an octagon church that I found as a "secret hidden gem" of Pisa. It was cool to see, nothing special, we couldn't go inside. Better than that, there was a men's clothing shop next door that we spotted bicycle print shorts. The shop was closed but the owner was approaching as we peaked in. He opened up and let me try the shorts on and then a button down shirt that I ultimately purchased. Hey, my bike apparel game is strong!
At this point, we were sure he thought we were TOGETHER though and I was clearly the man *EYE ROLL* LOL!! 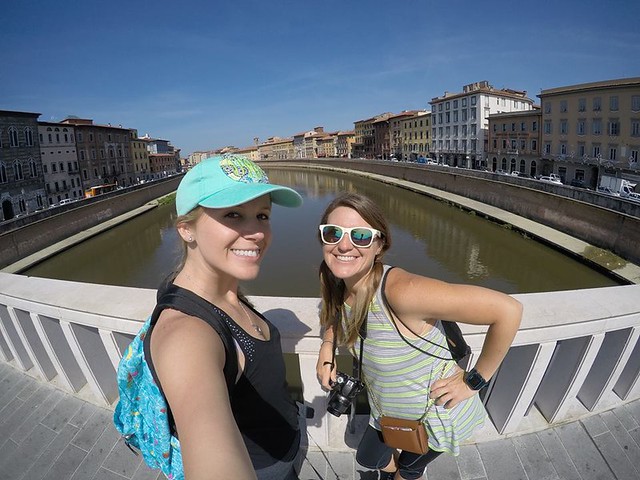 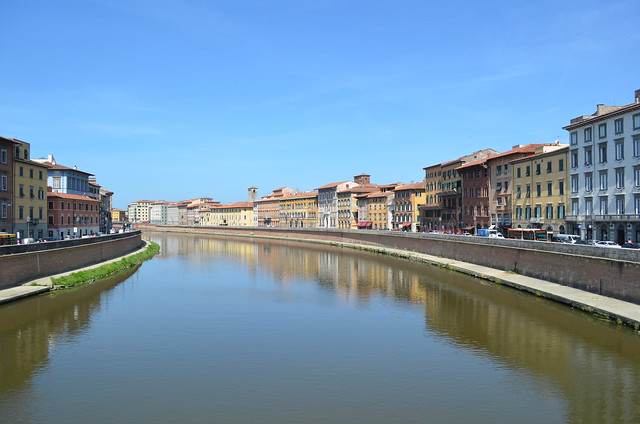 We pass over the Arno River on the Ponte di Mezzo bridge. A perfect place to stop for photos, Pisa's architecture and color is alive! There are important buildings dating back to the Middle age, that, during the centuries have been transformed. Towers, bridges, and buildings, in spite of their actual Renaissance appearance, have a medieval soul. 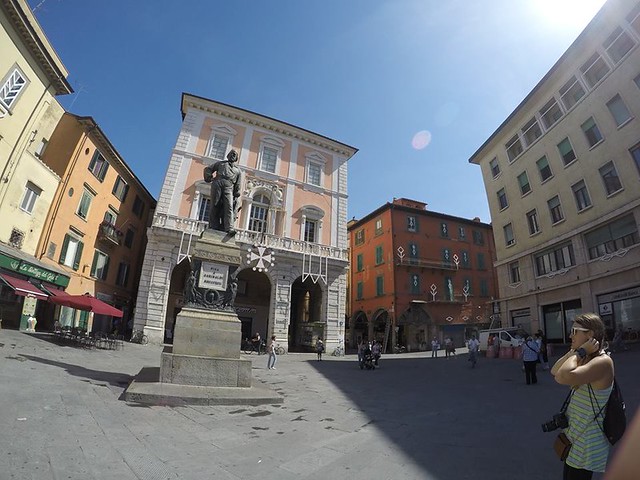 Which brings us to Piazza Garibaldi, the heart of Pisa’s nightlife and a good meeting point for a drink and Borgo Stretto, a medieval street. The street boasts cafes, wine shops, butchers, fish-sellers, bakeries and spice shops, street performers, tourists, and locals trying to get to work. 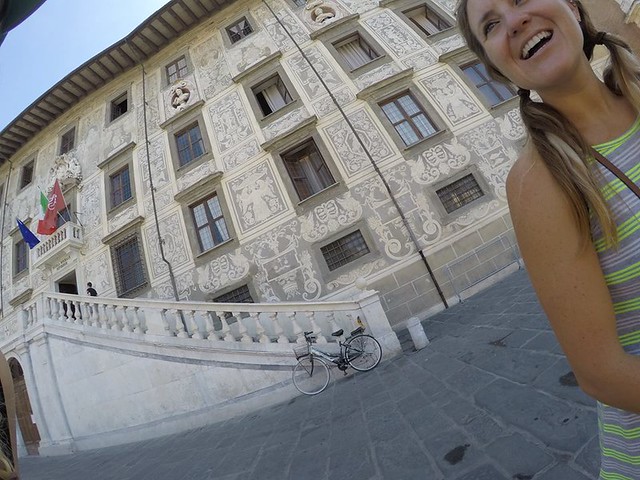 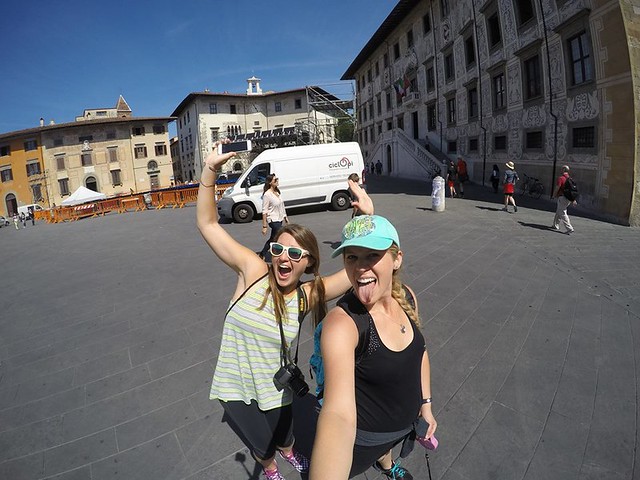 From Borgo Stretto, we headed over to Piazza dei Cavalieri, which during the Middle Ages was the civil and political centre of Pisa. The piazza is home to the Scuola Normale Superiore (Pisa Normal School), the Torre della Muda (made famous by Conte Ugolino’s tale in Dante’s Inferno) and the church of Santo Stefano dei Cavalieri. In the middle of the sixteenth century, the square became the seat of the Order of the Knights of Santo Stefano. They were setting up a stage and concert area so it didn't give us much room to explore. We passed through quickly... 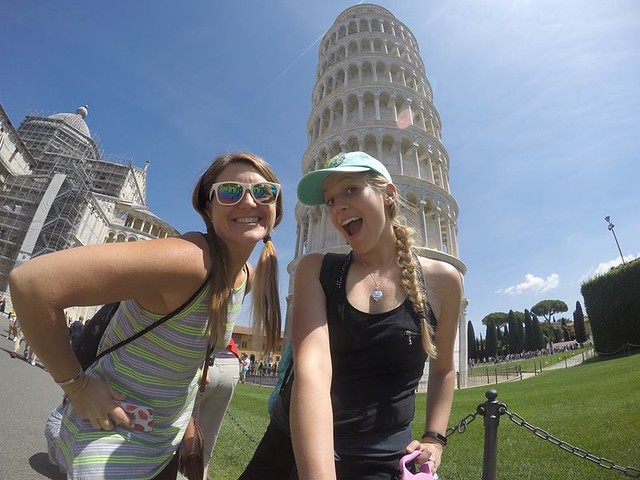 Because most importantly, and what you've all been waiting for, Piazza dei Miracoli! The Square of Miracles is home to the most popular Pisa attractions: the Leaning Tower of Pisa, the Baptistery and Camposanto (sacred burial ground), and the Cathedral of Pisa. There is also a museum hosting a collection of ancient Roman sarcophaguses and frescoes of the Master of the Triumph of Death. 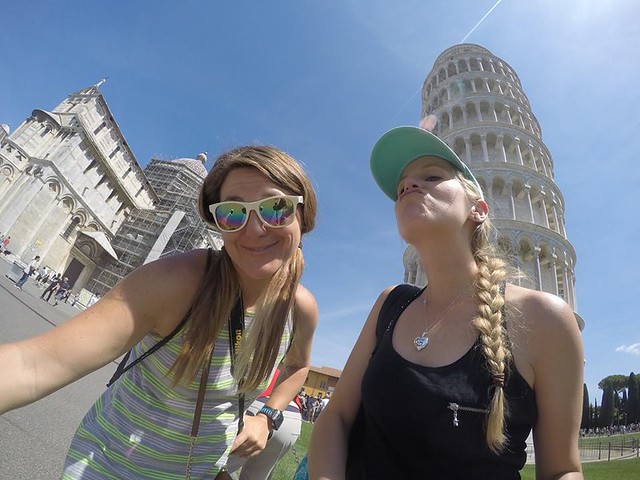 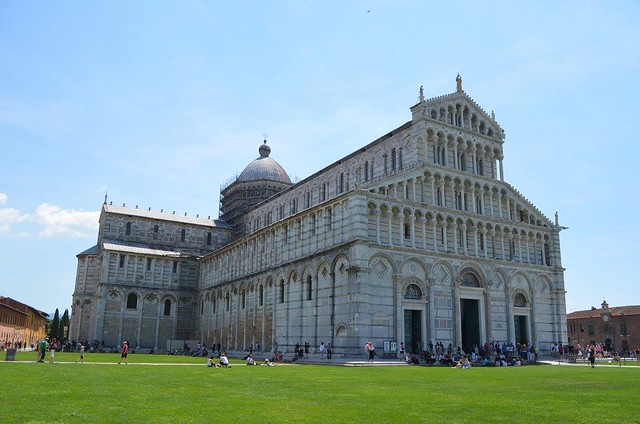 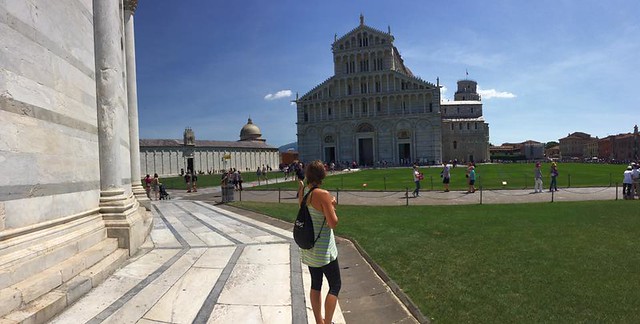 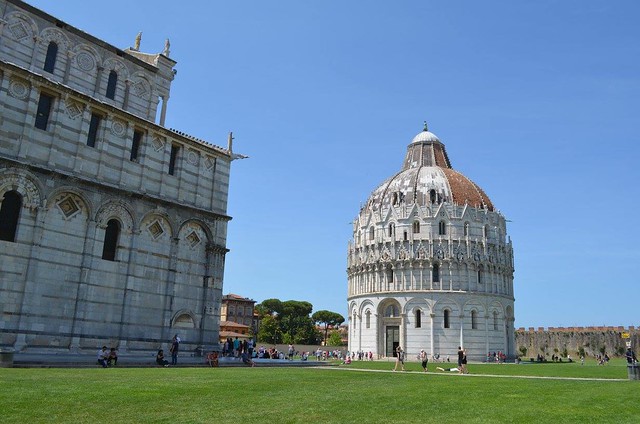 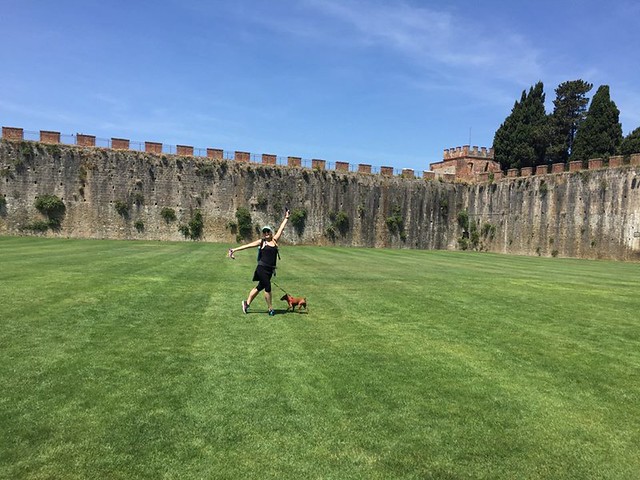 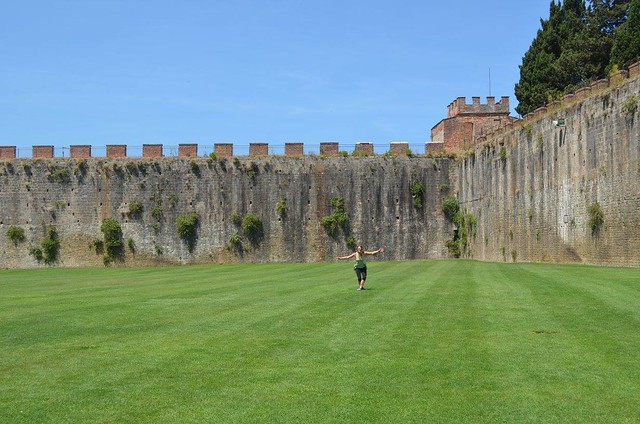 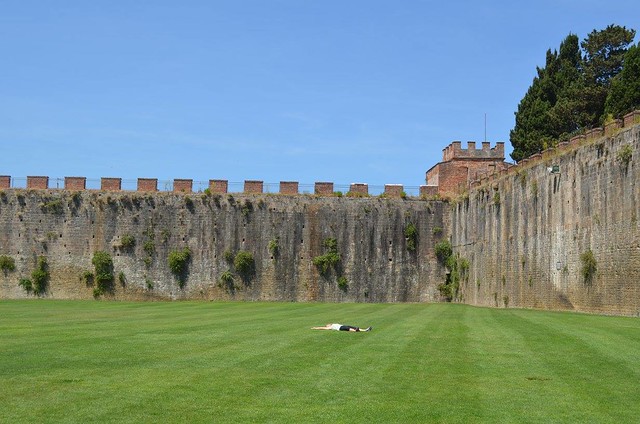 The square is packed with tourist but so large and spectacular that I barely noticed! There are huge green grassy areas where we can all just spread out! GREEN GRASS!! I wanted to take off my shoes and run through it, roll on it (so I kinda did...). 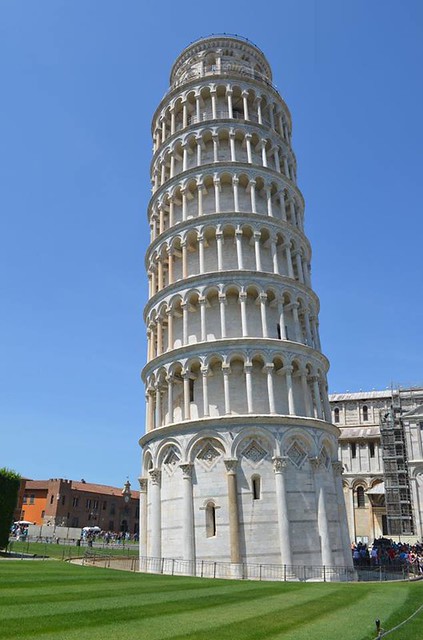 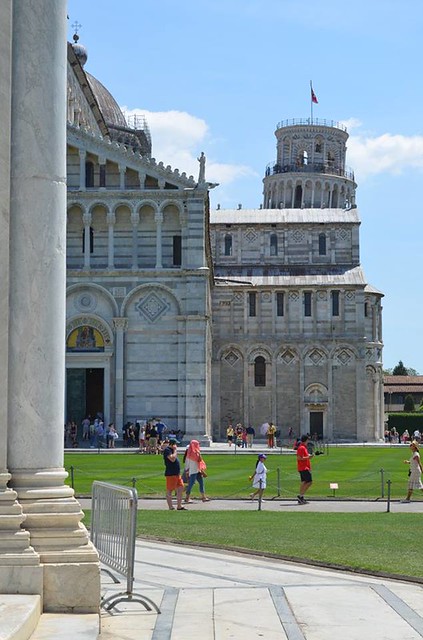 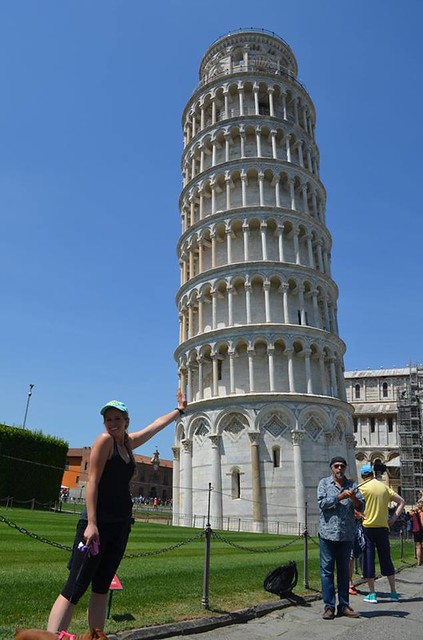 I could have stared at the Leaning Tower of Pisa all day. It's SO cool. And it's history is quite interesting. One of the 7 wonders of the world, we don't actually know who built this tower. It might have been architect, Diotisalvi who was working in the Baptistery during that period, but paternity of the tower is still open. It was built between the XII and XIV century. The tower leans because the ground gave during its early stage of construction and has since just stayed this way!! Even though they say the tower will never fall due to its vertical axis passing through its centre of gravity which falls into the support base AND there are underground pins/concrete to keep the tower up, it continues to "sink" a very tiny itty bitty amount yearly. Experts say it's good for another 200 years or so. WOW!

Since we got all the "touring" done quickly, it was time to relax and find lunch. Danielle I had spent the morning exploring and chatting, getting to know Pisa and getting to know each other. I like making new friends! Especially when I can just be myself. 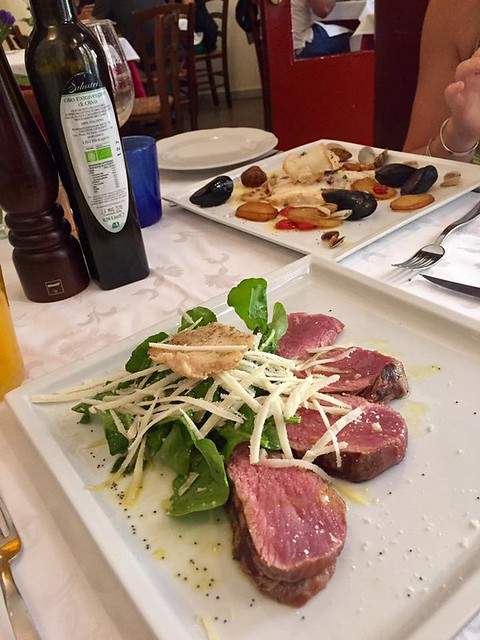 Lunch ended up being at the Osteria de Cavaliere. We started with cheese, wine, and prosecco and while Danielle took the beef for lunch, I opted for seafood. It was all delicious!! 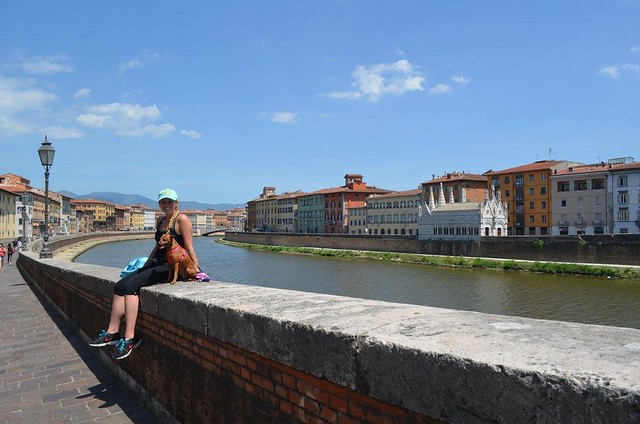 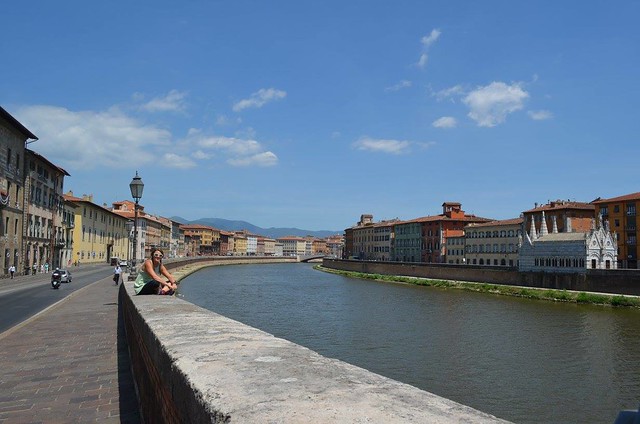 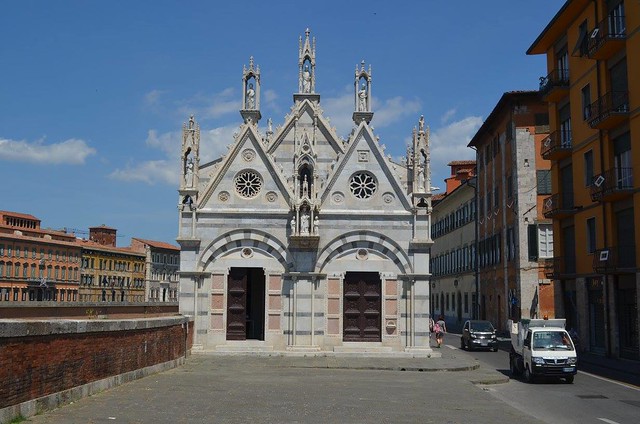 We continued wandering our way back towards the train station stopping for a few more pictures on the Arno River.

And no trip is complete without a stop for Gelato.
A Day in Pisa ~ CHEERS!! 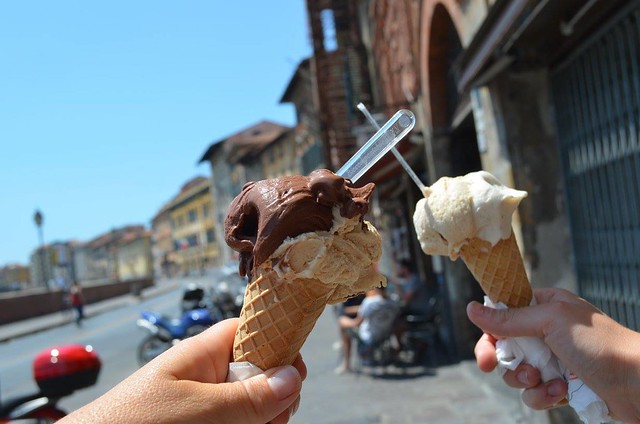