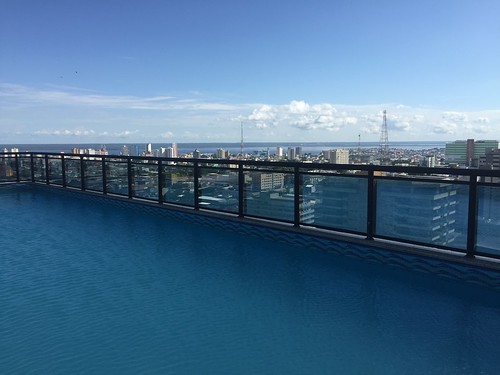 I had my Ironman adventure, I had my Amazon adventure, and now I've had a few days in Manaus, Brazil. And actually, Brazil is spelled BraSil, I'm not sure why we have made their "s" a "z". It's BRASIL! Anyway...

I had little expectations of Manaus, I only read a little about what to do while here and what to avoid...

So, we arrive back to the marina from our boat tour. Susan and Steve's flights weren't until late so I invite them to hang out with me for the afternoon. Deal. First stop is my hotel to offload our gear. I'm staying at the Intercity Manaus, a new upscale hotel. Upscale? Yes it WAS upscale, but holy heck, it was only $50 a night!! I walk into my hotel room and WHOA! It's a very large suite with a very large bed. I'm pumped, just what I need! Later I discover an amazing rooftop pool as well. 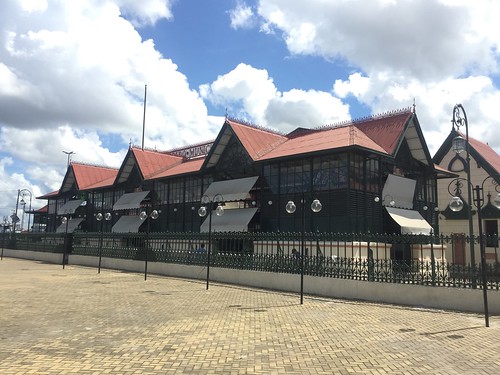 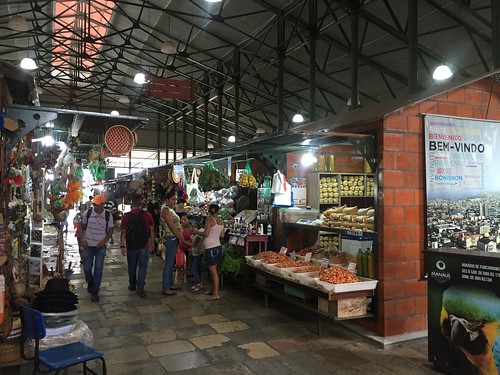 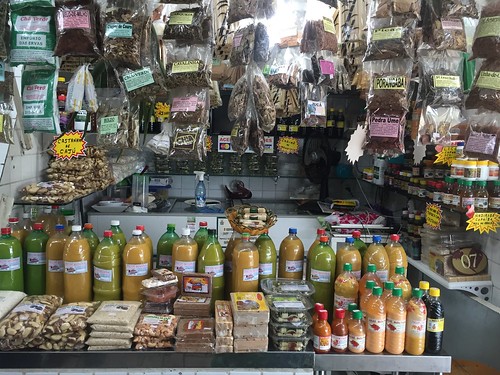 Next we taxi back down near the marina to explore the Mercado Municipal Adolpho Lisboa AKA the market. I have to admit it was quite entertaining. Booth after booth of handcrafted items, jewelry, nuts, fresh veggies, fruit, shrimp, hats, purses, dried herbs, and really everything but kitchen sinks! 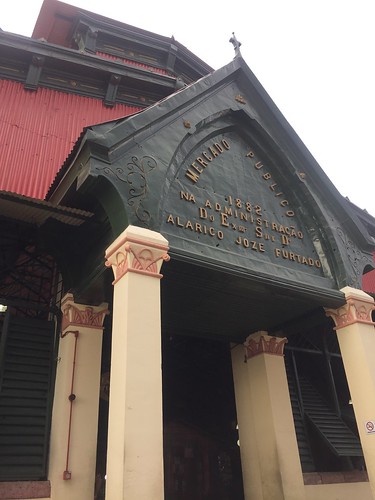 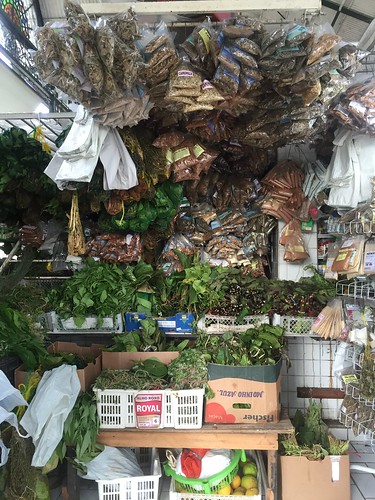 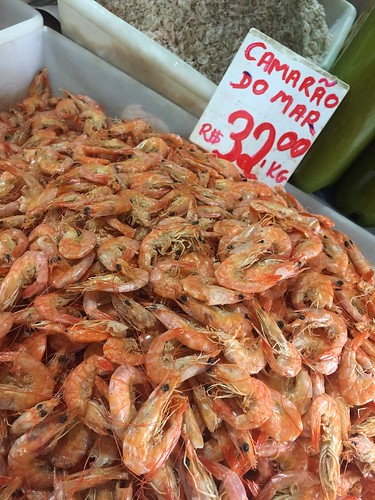 A lot of people. A lot a lot of people. Best words to describe: crowded, loud, dirty. And we had to pay to use the toilet. But a unique experience and I plan to go back for some fun souvenirs.
Needless to say, we wrapped that up quick.
Dinner at the hotel and I wished my Ironman friends off. 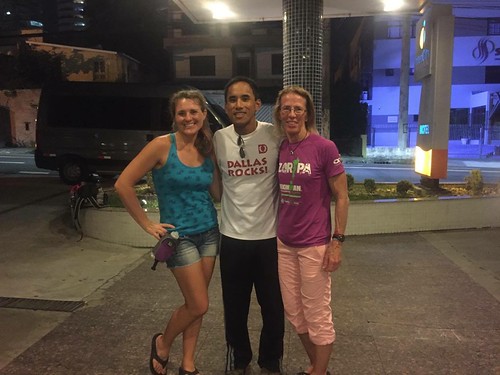 Saturday I'm up early and ready to explore. The captain, wife, and son from the boat tour? They live in Manaus and are prepared to be my tour guides (kind of)... note here that none of them speak a word of English! This is going to be an interesting day! 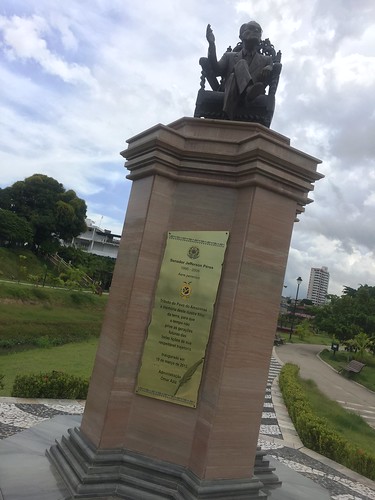 V picks me up from my hotel. Our first stop is the Parque Senador Jefferson Péres, a park named after one of the greatest politicians that Amazon has had. It's about the only place in this city to run and exercise too. It's a nice place, quiet and calm ~ finally! More interesting was the conversation we passed back and forth on Google translate. Ha! We walked. 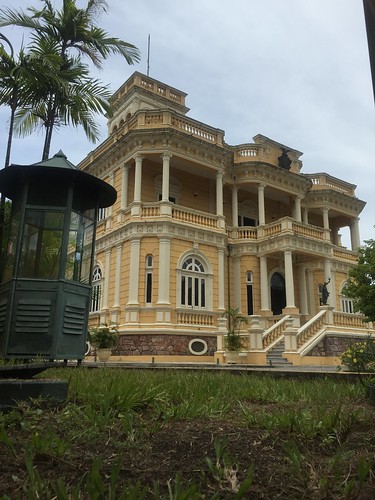 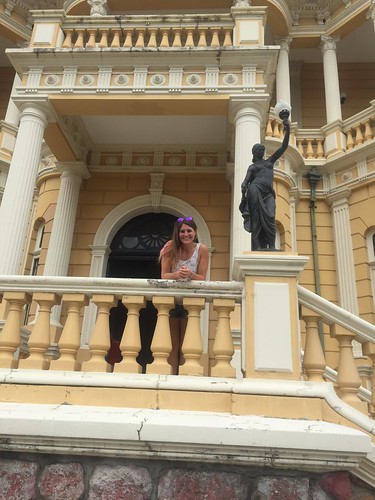 We continue on to Palácio Rio Negro, a restored, 19th-century rubber baron's estate featuring period decor, history exhibits, and gardens. The palace was first built for a wealthy German merchant of rubber then leased to the government and became the Governor's home then only Government Headquarters. We got lucky here, the guides spoke English. We were given a quick tour of the palace and brief history lesson regarding the palace and the rubber boom. A lovely home greatly differing from the other homes here... 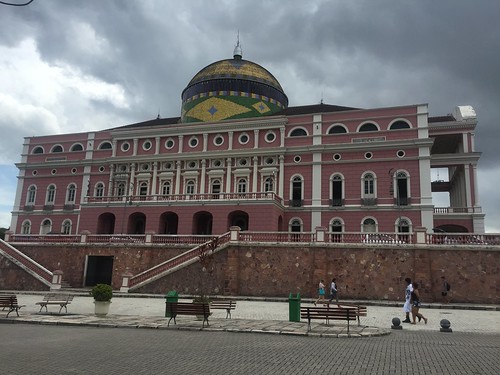 Next we walked to the Teatro Amazon, an opera house. Unfortunately there were not any performances nor any tours being led, but the architecture was gorgeous and deserved at least a photo. Like the park, this area was calm and quiet. I don't think the locals are rushing to the opera and I don't think tourists are rushing to Manaus. 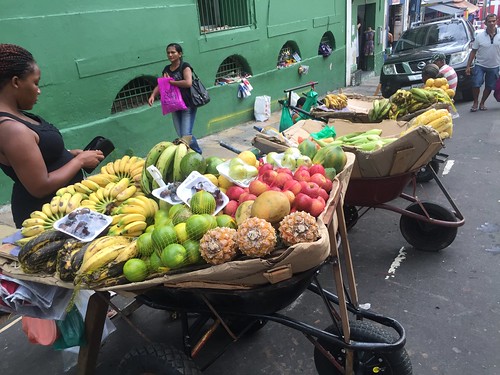 We are tramping the city streets between all that. It is so crowded here with over 2,000,000 people. I felt like a tiny blanco mouse in a maze. It's loud, unkept. Broken sidewalks, stagnant water, and neglected buildings ~ gritty might be a good adjective. It feels so chaotic. A lot of traffic and hustle; but with no where really to go. So many taxis! And street vendors everywhere. I love all the fruit, but there are people selling everything you can imagine; even walking between traffic selling water, cell phone chargers, snacks, and more. *I'll also tell you now, it's a bit uncouth to have your phone out snapping photos (which is also so strange because this isn't a high class or snobby kind of city!). No one drinks out of cans or bottle either; always a cup. Different. 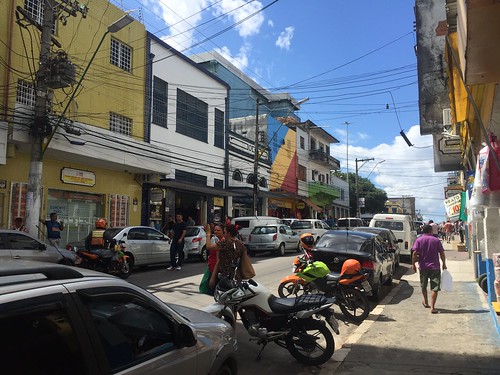 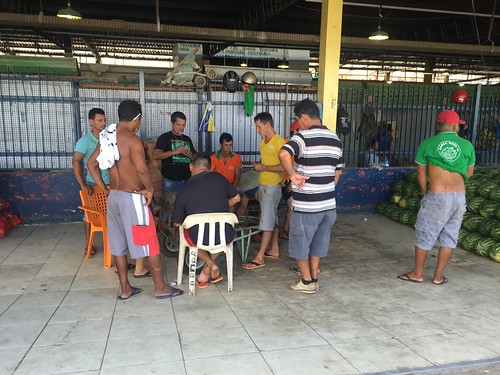 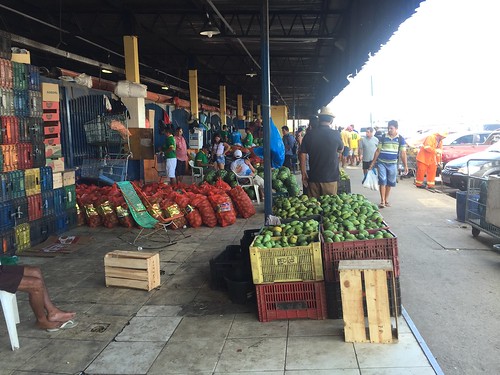 There is no style or common look of the city or the people here. The city is actually nicknamed "Paris of the Tropics" but trust me, it's no Paris! But it does have a unique urban meets Amazon with a French flare to it. The people do not however. Like most of Brasil, the people range from homeless to upper class without much of a middle ground. Therefore the majority of people on the streets, out, and about are homeless to lower class. I'm not being mean here! I'm being truthful! And the upper class are... well, who knows!? Probably in Rio!

Moving on... we visit V's family home. There are 9 brothers and sisters, and mom and dad for 11 total. 9 of these people live in the home. I can't even live with 1 and they are resting happy with 9. Wow! I'm quickly greeted with a cold fruit juice. They are very welcoming even though I feel a bit uneasy. We conversate a little via Google translate but mostly the family goes about their business like I'm not there. They did invite me to stay or to come back and stay. Cool! I'm also invited on a family boat outing Sunday. 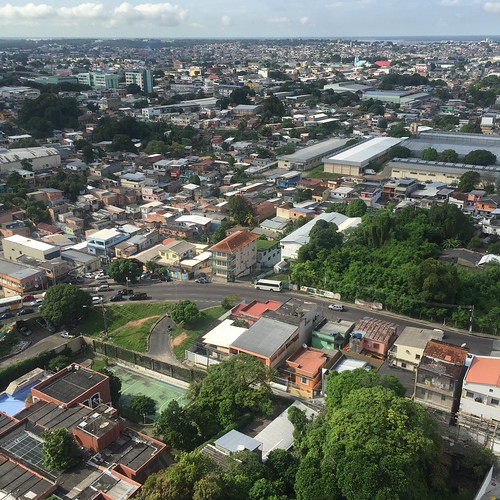 Unfortunately the family confirmed a 6 day tour Saturday night to start Sunday morning so our fun day was called off. Instead I met them at the marina to see them off, wandered around the market for a few minutes, worked out, and spent the day kind of being lazy in my fabulous hotel room!
I followed that up on Monday with another quick workout and visited the local shopping center (mall). The mall was huge and impressive. This is definitely where the money shops! I bought a cute dress, had some sushi in lieu of SUSHI MONDAY!!, and a small scoop of pave de brigadeiro (your guess is as good as mine!!) gelato. 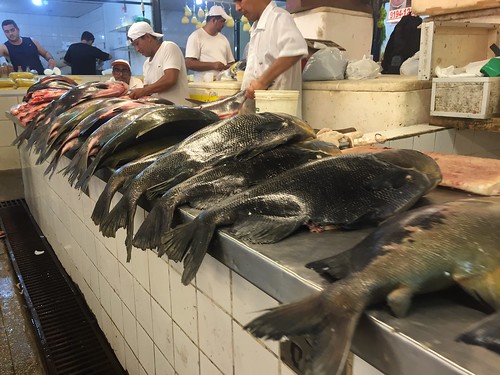 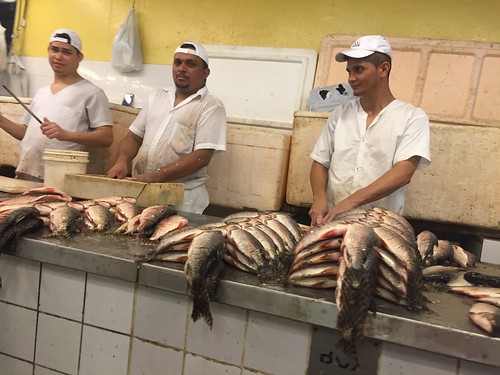 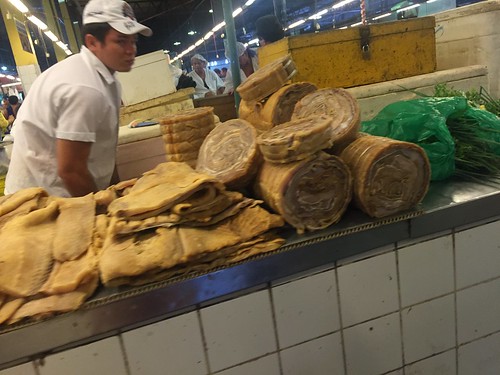 Tuesday I was back to the market to experience the fish and grab some souvenirs. I nearly threw up in the fish market; I had to leave quickly. But not before snapping a few photos ^
Later I packed up, and prepared to travel. 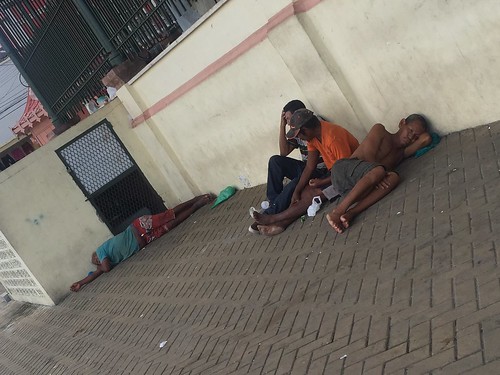 Despite so many warnings, I never really felt afraid in Manaus. I was a little uneasy walking solo, especially when closer to neighborhoods but, I always sent my location to my mom and told her where I was going. Maybe I'm just naive? But drugs and crime are everywhere and I figure if I'm going to get murdered, I'm going to get murdered. It won't matter if it's in Gulfport, MS or Manaus, Brasil. I've been invited back in two different formats, and there's a good chance I will accept one of those offers ~ probably with the indigenous tribe, but not before saying hello to the V family!!

I'm really glad I stayed the extra few days to explore a new city/culture. It was a challenge between the language barrier and my general anxiety. But I made it! And this has truly been an amazing adventure!!
Courage. Confidence. Determination.
If You Never Tri, You'll Never Know!