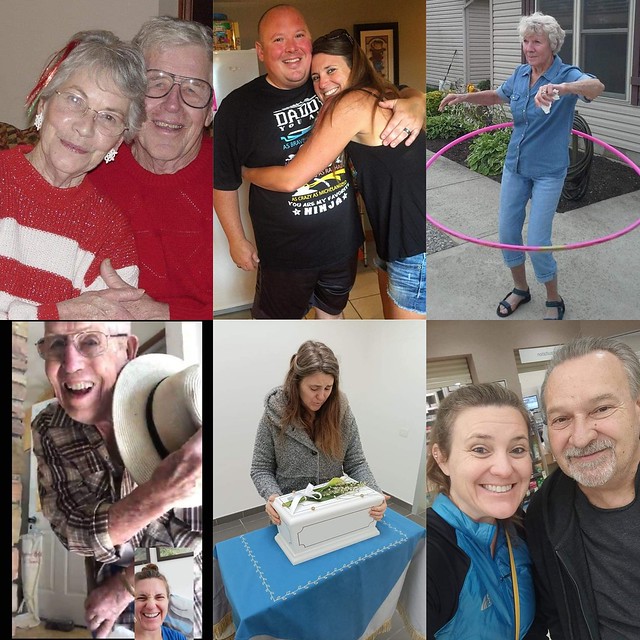 Or maybe I should say, scared OF death...

Since losing my brother, every bump, lump, boil, bulge, knot, discoloration, blemish, blot, itch, prickle, tickle...  sends me in to a panic. Jamie died from melanoma cancer. It metastasized to (many) organs and ultimately, the fight was over. He never actually had cancer on his skin. But the first thing he found was a lump in his armpit. My lump can be a pimple and first thought is, I have cancer and I'm going to die.

After losing grandma, I added a fear of alzheimer's, parkinson's, and being someone I don't know.

Grandpa's death magnified my fear of bumps and lumps... cancer in general.

And now, every flutter of my heart, irregular beat, headache, burning, dizziness... basically ANY feeling in my body also sends me in a panic. Am I going to drop dead with a heart attack? A brain attack? Do I have high blood pressure? High cholesterol? Is my anxiety going to develop in to more? I don't want to die.

There's just been so much loss in my life in such a short time. And I'm not trying to throw myself a pity party. I want to work through it and get to a point where I'm not afraid to die. Writing is therapy to me and I haven't done it in too long. I also don't get to talk about it - all the loss - because, seriously, who wants to hear it?

My brother, my grandma, my grandpa, my baby, my dad. 5 extremely close deaths. And there are a few more in these years that didn't get front and center attention but have added to my grief and fears - my grandpa's twin brother (Uncle Joe), an Aunt, 3 of my past Soldiers, a cycling friend committed suicide, my friend's son, a childhood friend... these people all died in the span of 4 years. A person shouldn't experience so much loss in such a short time.