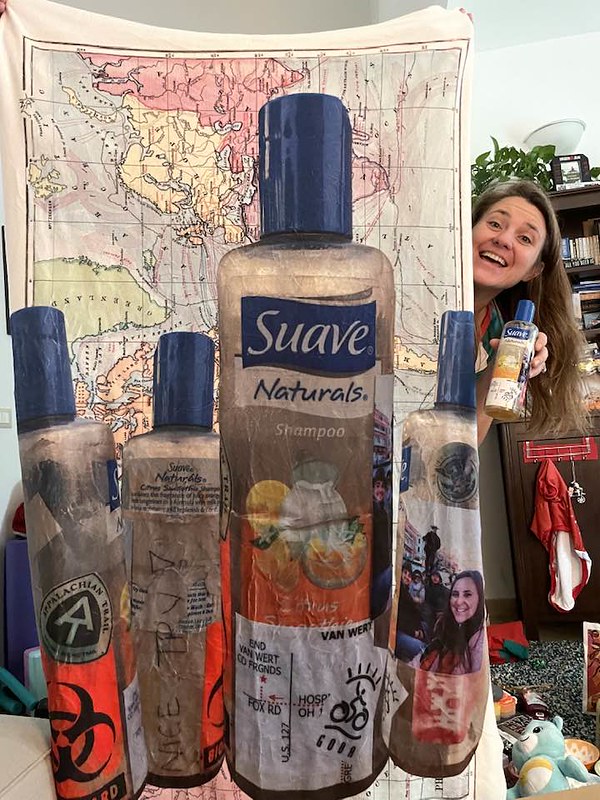 Growing up with a solitary bottle of Pert Plus in our shower, I’m certain mom didn’t know a) there’s a whole wide world of flavors out there and b) you’re allowed to have this array of flavors in your shower. Sometime between 1998-2000 I got mom a bouquet of Suave smells and flavors – coconut, peach passion, strawberry fields, citrus smoothie… who knows, but several different ones (along with matching body washes).
At some point, mom and Bob sold the house and moved in to the RV to travel for a few years. Condensing all their possessions meant mixing what remained of all the shampoos in to one bottle. If you know mom, you know she doesn’t toss, she mixes!

We remember they came to visit me in Cleveland… Ready for a new scent, mom intentionally left the Suave bottle in my shower.
“Mom, you forgot your shampoo.”
“I know.” …

Ugh, I don’t want your mixed up, leftover shampoo!
And so began the bottle battle… I couldn’t throw it away, it was a gift! It traveled with me my next visit to Troy/Dayton area. Showing back up in their tiny RV shower probably freaked mom out and/but also inspired the “game on” play. We recall it went back and forth for a while between the RV, my various Cleveland homes, and grandma’s house. I think it even showed up at my dad's house once. It’s like that creepy doll at your grandparents that just stares at you on the shelf. There it is, in the shower, sitting among all the high dollar brands like it belongs there.
In hopes to stop getting the bottle back, we started to play a bit of hide and seek with the bottle. I’d reach far back in to my cabinet and there the damn thing was… But how!? Back and forth, house to RV to new home, all across the states. Oh but wait, we’re still in early 2000’s…

I joined the Army in 2006 and wouldn’t you know it, it showed up in Iraq. Yes, this is my mother people. She didn’t think I could mail things back to the states; the bottle got its first “sticker” NICE TRY! and traveled back over the ocean. I once mailed the bottle to mom and Bob’s rest hotel while they were backpacking the Appalachian Trail. It went to South Africa for an Ironman. Secretly shoved in suitcases at every opportunity, this bottle has seen the world.
Once, at the airport, post 9/11, TSA made me throw it away… Nearly devastated that our game had found its’ end, I told the TSA agent all about this bottle battle. We photographed me tossing it in to the trash with the TSA gal, arms folded, hovering over me. Just as I was letting go of it in the trash, she said, you know what, there’s hardly any liquid in the bottle, take it, get out of here. Maybe this post will someday find her: thank you TSA lady for saving our Suave bottle!!
Mom only got the photo of it going in the trash at the airport. Later, of course, the bottle mysteriously showed back up in HER shower. Muhahahaha!!
Across the states back and forth, GOBA adventures, Ironman events, 2 wars, Brazil, Africa, and all over Europe, currently in Italy -- this bottle is well traveled! ...collecting a few stickers along the way.

Mom has hired friends and family to do her dirty work -- I may have a few accomplices as well. I've also been caught red-handed. We’ve gone months with the bottle in hiding, no one even knowing (or admitting) where it is… I don’t even KNOW how the bottle ended up in Sarzana in July! She probably paid off my husband.

Planning for mom and Bob’s Christmas adventure in Italy, I knew the 20+ year battle needed to come to an end. The biggest, grandest fight of my life… I considered miniaturizing the bottle for more easy travel. I considered cutting a glass bottle, putting the Suave inside, and sealing it back up – forever encapsulating our “scents” of humor. But then it came to me. Everyone loves a nice soft blankie! A few pictures of the bottle, a bit of photoshop and design skills, and I had the perfect forever gift. A gift she can never leave behind!
Will this be the truce the bottle deserves? Will it finally be placed upon a shelf of trophies or rinsed down the drains? Or will the bottle live on? Forever finding a home in the shower of the challenger…
Or maybe we team up and one day you will pull back the curtain to find our Suave in YOUR shower!!
Courage. Confidence. Determination.
If You Never Tri, You'll Never Know!