It's 4am, I'm wide awake fighting jet lag. Luca is up soon to prepare for his early flight. Around 6am I've decided I've had enough and fall back into bed. Luca comes in just before leaving and kisses me goodbye. Several minutes after his departure I hear someone at the door, entering my home. I jump out of bed, adrenaline flooding my system, and run into the living room shouting "GO AWAY!!!"

It's Luca. He's forgotten his work keys. Prepared for battle, now I'm trembling.
What the hell was I going to do in my I❤️NY sleepy pants and house coat? Really Lisa?

An Italian tradition, the tree goes up on December 8th - L’Immacolata (The Feast of the Immaculate Conception). Having missed this day together, Luca waited for my return. Like literally, the moment I returned... Okay, first we drove 3 hours from the Milano airport. But he asked several times, "Do you want me to put it up?" (the tree) No baby, let's do it together. I could tell he wanted this to happen so bad. Abandoning sleep, we went decoration shopping.

He wanted tons of color I wanted bright white. We compromised, colored lights w/white decorations. The tree went up quickly w/our favorite carols playing in the background. We begin stringing the lights and cut short, we don't have enough. Luca goes after more...

I'm reorganizing the lights when the blue and green go out. Son of a ... I go through the entire strand. No bulb is loose or out. I quickly call Luca, "Babe, the green and blue just went out." Okay, we'll exchange them, he's coming back. Just in time for his return, they come back on. Well they're on now! I'm restringing them (against Luca's, let's just take them back better judgement). I refuse. He leaves again to get more.

The blue and green go off again, back on after fumbling with them, and off again. By now we have decorations hung. A whole night with red and orange on the top, colored on the bottom goes by... 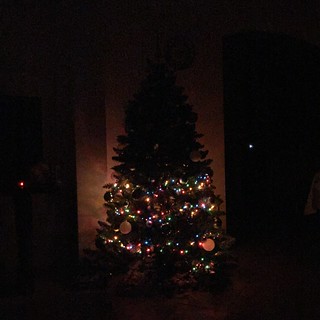 Surrendering, I pull the lights off and agree on an exchange. Although, we both admit, the tree looks just as pretty w/out the lights.

Besides the Christmas decoration outing, I haven't left my house. One, because I've been so tired and can't figure out what day/time it is. But mostly because I'm terrified!! I feel as if I've forgotten all my Italian and I'm brand new 😱 Seriously, on the way from Milano, the gas station girl asked, "Troppo?" after heating a croissant too long and browned it and I freaked out running to Luca, help me I can't understand!! Of course I know what troppo is!!!

It's 3am on Friday morning. I'm wide awake.
I think I'll have some cereal...
Courage. Confidence. Determination.
If You Never Tri, You'll Never Know!